Trump is living up to poll rhetoric. More Muslims may find America a mirage. 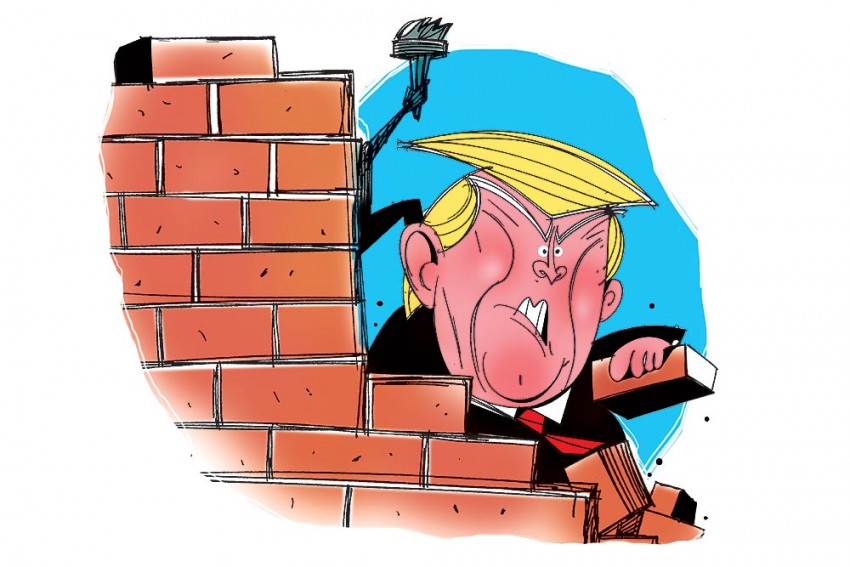 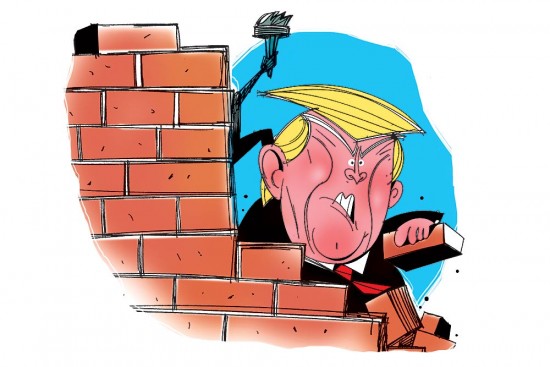 The Islamophobia that had dominated Donald Trump’s presiden­tial campaign got translated into the US government’s policy on January 27, sadly, coinciding with a day observed in large parts of the world—including Amer­ica—as the International Holocaust Rem­embrance Day in memory of millions of Jews who perished during Adolf Hitler’s anti-Semitic pogrom. The new president’s measures sparked off large-scale protests in the US, dividing the administration and judiciary vertically. Nearly 100 American diplomats signed a petition questioning the policy, which drew street protests in other countries as well. In the UK, a nation that has traditiona­lly been a close ally of the US, thousands gathered in London to demand the cancellation of Trump’s proposed state visit that included a meeting with the Queen and stay at the Buckingham Palace.

Trump, who had barely been a week in office as America’s president, issued an exe­cutive order, putting on hold for 120 days entry of Syrian refugees into the US and banning people from seven Muslim-dominated countries—Iraq, Iran, Libya, Syria, Sudan, Somalia and Yemen—for 90 days from entering America. The argument: they needed “extreme vetting” before being allowed to come in to keep the country safe. There are indications that more, particularly Pakistan and Afghanistan, could join the list of banned countries. 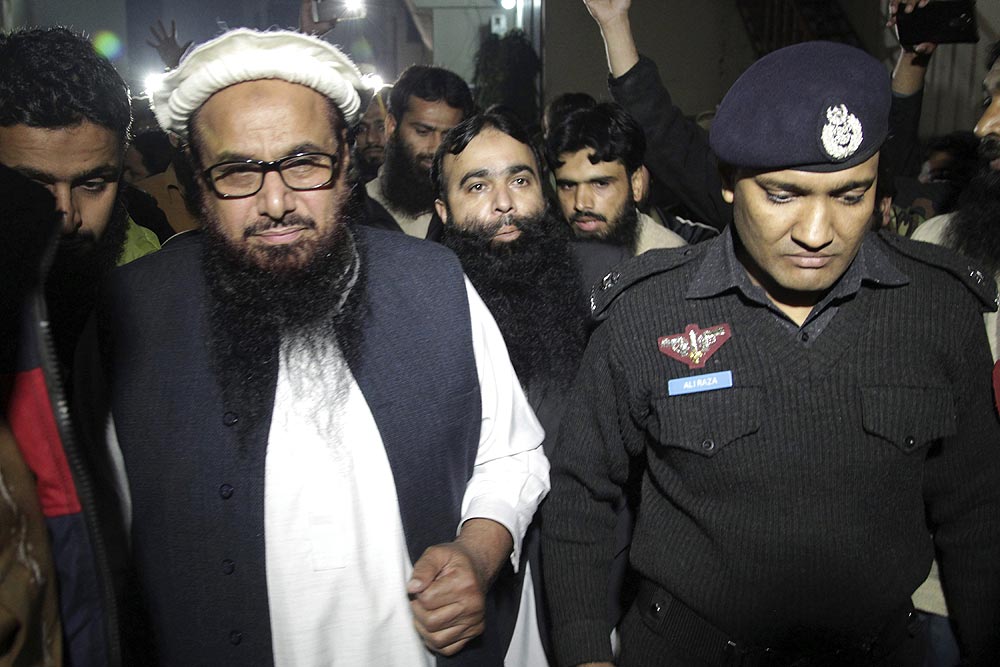 Trump dubs the media reports as false. “This is not a Muslim ban,” he says. “This is not about religion—this is about terror and keeping our country safe.” But his assurance did not convince most, including several sections in the US administration. On January 30, the president sacked acting attorney general Sally Yates, an Obama appointee, for questioning the legality of the immigration ban, indicating the divided house his decision has created among American administration officials.

Not one to mince words, Trump called his executive order, ‘Protecting the Nation from the Entry of Foreign Terrorists into the United States’. However, its “bigoted and self-defeating” nature led commentators to question not only the policy’s effe­ctiveness but also the arbitrariness with which it was being implemented.

Islamabad is getting nervous about how the US will view the country. Its media has advised American nationals of Pakistani origin to return to the transatlantic shores.

There is a growing fear that the move will erode the confidence of many close allies of the US in the Muslim world, like Iraq, where American soldiers are engaged in a fight along with Iraqi forces against the Islamic States. At the same time, serious doubts are also being expressed on Trump’s choice of countries, as the list doesn’t figure some like Saudi Arabia and the United Arab Emirates—the two main countries from where most of the 9/11 terrorists had come. The reason, some felt, was Trump, a real estate billionaire-turned-politician, had business interest in these countries, because of which he did not want to jeopardise relations with their rulers.

The executive order also led to other int­eresting developments elsewhere. The Pakistani government, which was yet to officially react to Trump’s proposed move, surprised everyone on January 30 when it decided to put under house arrest Jamaat-ud-Dawa chief Hafiz Saeed. In India, it was seen as a happy coincidence as New Delhi had been trying for years to convince Islamabad to act against Saeed for his alleged role in masterminding the 2008 Mumbai terror attacks. Though Pak­istani authorities said the decision was taken in national interest, Saeed, who is nearing 70 and had been roaming freely and spewing venom against India all these years, reacted angrily: “The decision was taken in Washington, not Islamabad.”

A defiant Imran Khan told a Lahore rally that he hoped Trump goes ahead with his ban on Pakistani nationals. The Pakistani cricketer-turned-politician felt this will allow his compatriots to seek jobs within the country and help in nation-building.

Former ISI chief and retired Lt-Gen Asad Durrani, who had worked closely with the Americans, felt the political storm created by Trump should be allowed to settle down before making a proper assessment of his policy and the ways it will affect Pakistan. But he was quick to point out that merely working close in Afghanistan did not make the US and Pakistan “allies”. He added, “Our interest there was too divergent.”

However, Islamabad’s growing nervousness of how the new US president might look at the Islamic republic was evident from commentaries in its leading newspapers that had been advising American nationals of Pakistani origin or students studying there to immediately return to the transatlantic shores. This was anti­cipating that, sooner rather than later, Pak­istan too, will be included in the list of countries from where people may not be allowed to enter the US.

If sections in India were feeling happy over Pakistan’s discomfiture, much of it soon evaporated with the news of a new US legislation seeking to raise the minimum wage of H-IB visa holder to $130,000 from the current range of $60,000-80,000, making it difficult for Indian IT companies to replace American workers with Indian IT professionals. The stocks of the big four Indian companies—Infosys, Wipro, TCS and Tech Mahindra—fell between 3-6 per cent in the Bombay Stock Exchange on anticipation that their edge over other global competitors is likely to erode with the intr­oduction of the bill in US parliament.

The South Asian sideshow notwithstanding, the new president’s decision on Muslims has brought to surface, within America, fissures that had been evident during his campaign last year. With regularity, Trump had fallen back on xenophobia and ‘Muslim baiting’ to energise his supporters and consolidate his own constituencies, especially the White Americans in the country’s “rust belt” made up mainly of Christians and largely unemployed people left behind by the effects of ‘globalisation’.

“Ultimately, we fear this executive order will become a self-­inflicted wound in the fight against terrorism,” Republican Senators Lindsey O. Graham and John McCain said in a statement. They felt it sends a signal that America does not want Muslims to come into the country. “We fear this executive order may do more to help terrorist recruitment than improve our security.” Much of that apprehension was borne out by the response of the Islamic State. Through postings on social-media sites linked to it, the terrorist group predicted that Trump’s order would galvanise Muslims as the United States is at war with Islam.

But Trump, typically, attacked his Repu­blican Party colleagues. “The joint statement of former presidential candidates John McCain and Lindsey Graham is wrong—they are sadly weak on immigration,” he tweeted. “The senators should focus their energies on ISIS, illegal immigration and border security instead of always looking to start World War III.”

He argued that the seven countries named in the order are the ones the just-­exited Barack Obama administration identified as “sources of terror”, while pointing out that his predecessor, too, barred refugees—from Iraq for six months in 2011. “We will again be issuing visas to all countries once we are sure we have reviewed and implemented the most secure policies over the next 90 days,” Trump assured.

But the weekend saw chaos and panic all around. Passengers who were already mid-flight were detained on arrival despite having valid visas or immigrant permits. Many were turned away at airports overseas when they tried to board their flights to the US.  Several demonstrations were held outside the White House and Trump Tower in New York. World leaders, including many of US allies from German Chancellor Angela Merkel to Canadian Prime Minister Justine Trudeau, reacted sharply and dissociated themselves from the American President’s decision. Iran and Iraq threatened reciprocal ban on US citizens coming into their country.

But scepticism remained about the mot­ive behind the presidential move. “Trump knows that if he admits it’s a Muslim ban, it would be legally indefensible,” says Jamal Abdi, policy director of the Washington-based National Iranian American Council. “But on the campaign trail that is what he called it and he asked his advisors to figure out how to make it happen.”

Abdi points out that even the Bush Administration had tried to implement a registry programme for mostly Muslim-majority countries after 9/11 but it was shelved because of strong opposition by the US court. “With Trump, the intent is clear—he said it was his aim was to ban Muslims many times,” he adds. “So just because he’s changing his story now doesn’t change what this is.”

In a way, Trump’s intent became clear two days before he issued his order on the immigrants and Muslims. That was in an ABC TV interview, where the president said he was going to sign an order banning Muslims from entering the US.

But when Trump was asked if he was concerned that his measures could cause more anger among Muslims, he pointed out that “there’s plenty of anger right now” and much of it was because of the US’s invasion of Iraq. “We shouldn’t have gone into Iraq. We shouldn’t have gotten out the way we got out.”

According to Trump, the biggest mistake the US committed was not to have kept control over Iraqi oil. “If we took the oil, you wouldn’t have ISIS and we would have had wealth. We have spent right now $6 trillion in the Middle East and our country is falling apart.” Baghdad has already reacted by making it clear that the country’s oil is for the Iraqi people and some had even been thinking of keeping Americans out of Iraq if Trump continues to harass Iraqi nationals.

In Iran, it has been bad news for moderates and only vindicates what hardliners have been arguing all along that Iranians should not trust the US. “Trump has given even those who want better relations with the US no choice but to condemn what he is doing,” says Abdi.

But how is it likely to play out in South Asia? “I am sure he will eventually go to Afghanistan and Pakistan,” says Pakistani commentator Ayesha Siddiqa. “But that will end American war in the region. It means that next time US needs help in that part of South Asia, these states will extract greater concessions.” She also felt that the new developments could push Pakistan further towards the China-Russia camp, tilting the balance against the US in Afghanistan.

If this gives hope to some sections in India of a  closer Indo-US ties in Afghanistan and the entire region and bey­ond, one must be mindful that under a Trump presidency nothing can be taken as a given. With his pronounced stress on “America first” to deal with the world, any country can slip off from his list of friends.