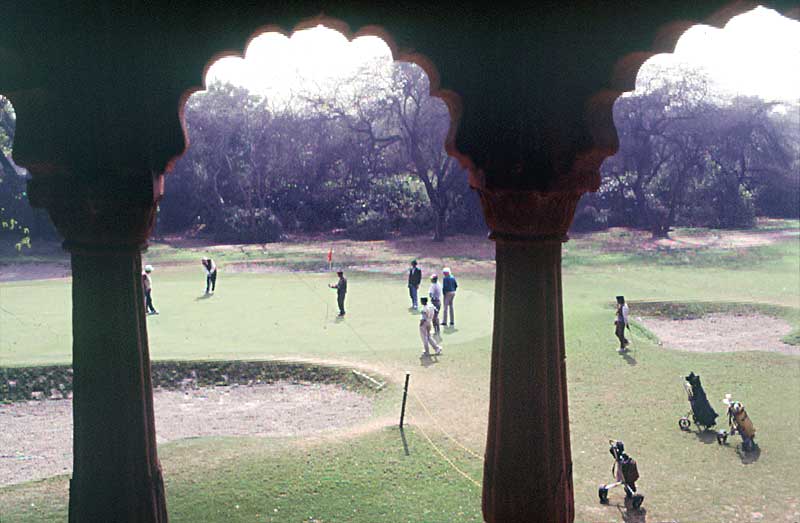 A sprawling 170 green acres right in the middle of the national capital—that’s the Delhi Golf Club, an elite social circle, admittance to which may take up to 45 years of waiting. The who’s who of Delhi, rich businessmen, MPs and ministers, bureaucrats, retired and serving defence officers—so runs its power list of members. The membership fee is Rs 5 lakh. Given the scarcity and the desirability of membership, attempts to gain backdoor entry shouldn’t come as a surprise. What is surprising is that these attempts—successful too—came not from nouveau riche upstarts but from the Union ministry of urban development (MUD), held by Kamal Nath. Sources in the ministry say they could not have stalled the attempt, for the orders came right from the top.

The club happens to stand on government land, held on lease from the ministry. A quid pro quo deal for out-of-turn memberships has been struck by the ministry with the club when it sought extension of the land lease. The propriety of such a deal—for both parties, the ministry and the club—is now being questioned. After all, land belonging to the government is a valuable state resource; besides, does it behove a ministry to haggle over club memberships? Another vital question, which many club members are asking, points accusingly at the club’s administration committee: where was the need to seek lease extension years before the existing lease expired? Was it done to favour Kamal Nath and his ministerial clique? Or were the club administrators influenced or arm-twisted into doing so?

The club applied for renewal of the lease, obtaining it on July 19. However, when it applied, there already was a lease running up to 2020. The administrators had sought renewal eight years in advance. The ministry’s demand was for 49 out-of-turn memberships at a go. After opposition from within the club, and negotiations between the club and the ministry, the ministry settled for about 25 out-of-turn memberships.

Seventeen of these have already been awarded, all duly recommended by the ministry of urban development. Among those who got membership are Deepender Singh Hooda, an MP and the son of Haryana chief minister Bhoopinder Hooda; Jitin Prasada, a Congress leader who was recently appointed MoS for HRD; Mukul Rohatgi, a senior SC advocate; Amarjeet Singh Chandhoik, an assistant solicitor-general of India; Sudhir Mittal, a special secretary in the corporate affairs ministry; Sameer Dwivedi, a retired lieutenant colonel; Rajiv Sawhney, an advocate; Manish Makhan, of Standard Chartered Bank; Mohit Gujral, an architect and nephew of former PM I.K. Gujral; and Anil Chanana, Mohan Puri, Ashok Kapoor, Anand Ahuja, Harish Jain and Angad Kapoor, all businessmen. Club members and members in waiting are now complaining about the arbitrary disbursal of the largesse. Some 30 MPs, cutting across party lines, have sought an investigation of the irregularities. In a letter to the PM, they say: “Various terms and conditions have been inducted for the first time which were never in existence for the last 60 years. Large number of the chosen persons who may have been close to the minister, bureaucrat or even the managing committee members of the club were suddenly inducted as members although the waiting list of membership of the club is more than 30-40 years with high premium which is a well-known fact in the golfing circle (sic).” 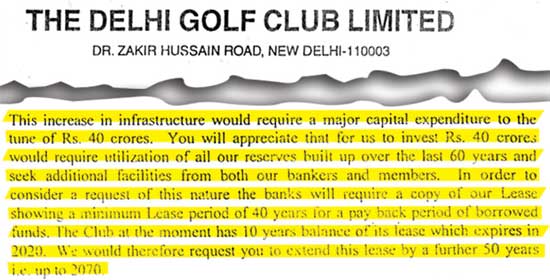 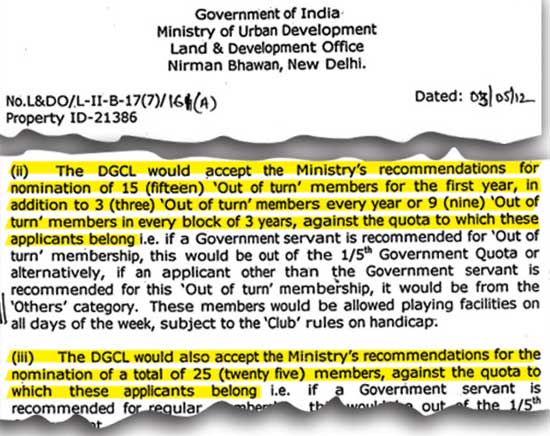 In an e-mail discussion of club members accessed by Outlook, one member points out: “In earlier cases, 1991 and 2002, the government was given the right to nominate golfers who were occupying eminent positions in civil and judicial services or were MPs. This time, an altogether new category of membership is being created in favour of private individuals which is arbitrary and discretionary.”

Another member, who had prepared an 11-point draft criticising the manner in which the club and the ministry were handling the issue, wrote in the online discussion: “I am concerned about the power being exercised to nominate such a large number of members by the current ministry and all of them without any scrutiny by the club or any kind of criterion at all. This could be played up like a mini scam or at least a misuse of power.’

From a perusal of communication between the club and the ministry, and between members of the management, copies of which are with Outlook, it appears that the club not only displayed undue haste in seeking lease renewal, it also tweaked its rules to accommodate the demands of the ministry. The ministry more or less managed to get what it wanted. Here’s how it happened.

On January 5 this year, the club wrote to the ministry seeking extension of lease. It said it wanted to borrow Rs 40 crore from banks to upgrade itself to international standards; the banks would require that the club be on valid lease for at least 40 years, the payback period. The letter, signed by then club secretary Rajiv Arora, asked for extension of the lease up to 2070.

On May 3, the deputy land and development officer of the ministry charted out a list of demands to which the club was to agree for obtaining the extension. The ministry wanted the club to accept “the ministry’s recommendations for nomination of 15 out-of-turn members for the first year, in addition to three out-of-turn members every year” (or hand over nine memberships at a go). In addition, it sought 25 nominated memberships that were not out of turn. Kamal Nath was probably in the know: this letter was marked to his personal secretary for the minister’s perusal.

The club discussed this at an extraordinary general meeting (EGM) on June 1. In protest, nearly 150 members signed a petition that the meeting be postponed. By club rules, no proposal can be passed unless 75 per cent of the members attending an EGM agree. Following this, the management sent out a letter to all members on May 23 contradicting the reasons given to the ministry for extension of the lease. Signed by Vijay Dhawan and Manmohan Singh—then captain and president of the club—it says: “The club has its own reserves built up over the years. The committee has studied the implications of the spend and can assure members that no financial burden will be levied on members on account of any project. No bank borrowings are envisaged.” The club is learnt to have then negotiated afresh—all such negotiations were, it goes without saying, informal—with the ministry. The ministry’s original demand for 49 memberships was whittled down to 25 memberships. Eventually, this was voted by members.

All that the chief information officer at the ministry had to say was: “It’s all a very straight deal. We have nothing to hide. If you want more information, you can get it through RTI.” Contacted for comment, Manmohan Singh, former club president during whose tenure the lease renewal took place, told Outlook: “I don’t understand what this is all about. Since I’m not the current president, you have to talk to the present management or president. What was agreed to has been approved by 82 per cent of the voting members at the EGM. In my view it’s a straightforward deal.” Not everyone in inclined to think so.