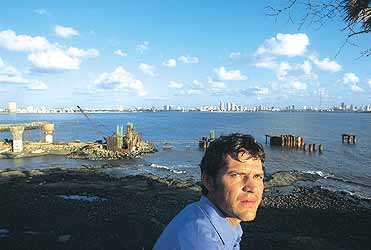 A Chalo India movement seems to be on. The latest wave, well a widening trickle really, is quite different from the previous ones. We're talking neither tourists here nor the backpackers and spiritual trekkers, those looking for themselves or cheap dope, or even gurus. Not even the "staying on" legatees of the Raj. The new millennium arrivals want to live and work in India. While Americans like Galen are uncomfortable in the altered landscape of their homeland after 9/11, the Europeans believe there are more opportunities for them in a post-liberalisation India. It was certainly the initial turn of the key in the door for many of them; they began hearing about it in the early '90s. But it was only in the second half of the decade that they started putting down roots here; many of them, particularly designers and buyers for fashion houses—or even architects and chef-restaurateurs—had been seasonal visitors, stopping by for a few months and testing the waters.

Like Nadia Bonfini. India was an accidental destination for the Italian designer and former Olympic skier who started coming here 10 years ago. She hung up her skis when she turned 23 and started work in a design school in Milan. But when she met a buyer who was outsourcing material from India for Armani, Donna Karan and Versace, Bonfini didn't waste any time in coming to India. From a short-term visitor, she became a full-time resident in Delhi about five years ago, when she set up her own company, a buyer agency. Last December she went one step further and opened Ideaplus, a shop for a French company for home furnishings and accessories on the new convergence spot of fashion designers: 1, MG Road. India's pulling power as far as she is concerned is the infinite possibilities the country offers her as a designer. "I've now left most of the buyers. I want to do creative work and new things."