Pass Me Some Spice Root

Now, look at your garam masala with new interest and respect. Keay gives us its history. 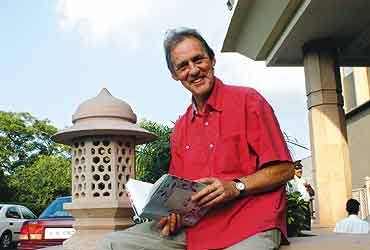 The Spice Route: A History
By John Keay
John Murray Pages: 286; Special Indian Price: £4.50
John Keay has authored several very readable books about 19th and 20th century travellers, explorers, surveyors and scholars. Here, he recreates the long, exciting history of the spice trade. The utility of spices, Keay tells us, lay in their "glorious irrelevance", their ability to impress and to excite envy. Their mystique lay in their rarity and exoticism and the ignorance of Europeans about their native home. Unlike tea, rubber or oil, whose sources were discovered before they became items of trade, spices were sought and traded long before Europe discovered exactly where they came from. No other trade in history, Keay emphasises, was so coveted, so hotly contested, none had such dramatic impact on world history.

The spice route was actually a cluster of routes, different segments of which came to the fore at various times. It ran across an enormous expanse—increasingly more water than land—in Europe and Southeast Asia. Its story is international, involving the participation of Greeks, Indians, Arabs, Chinese, Malay, Africans, Portuguese, Spaniards, the English and Dutch. Recreating it requires historical evidence as well as imagination and Keay is strong on both, as he weaves together new recipes and fashions generated by the craze for spices into larger historical frames. It is a compelling story, one that will make you look at your garam masala with new interest and respect.

The story goes back to lists of merchandise shipped into Sumerian ports from Meluhha (the Indus valley) and the more substantial trade between the Indus civilisation and the Persian Gulf. These were followed by the expeditions launched by the Egyptian Pharaohs. Such early interactions inspired both Herodotus’ stories of a land where birds make nests out of cinnamon and the Biblical tales of Solomon and Sheba.

On the heels of Alexander’s incursion into India, traders from the Graeco-Roman world expanded their business with the East. Keay retraces the voyage of an anonymous Greek who made the trip from the Red Sea to the pepper ports of Kerala, recounted in a remarkably informative, if dispassionate, 1st century AD work called The Periplus of the Erythraean Sea. On the Indian side, there are the references to yavana (western) traders in ancient Tamil poems, hoards of Roman gold coins found in peninsular India, and Mediterranean pottery found at sites such as Arikamedu. What Keay misses is the opening up of the India-Southeast Asia leg of trade, reflected in the mention in ancient Indian texts of Suvarnabhumi—the land of gold.

As the Roman empire made way for the Byzantine, Persians and Arabs took over where the Greeks and Romans left off. There were important innovations such as the lateen sail, magnetic compass and the astrolabe. Seafaring merchants from the Gulf for the first time ventured into Southeast Asia and China. But the precise places from where the spices came still remained largely shrouded in mystery for them.

The European quest for the spices of the East soon came to be enacted against the backdrop of the Crusades. And extravagant and imprecise as some of their details may have been, the accounts of Ibn Batuta and Marco Polo reflect the eastward extension of geographical knowledge to Southeast Asia. Less known events of the times include the prestige expeditions despatched by the Ming emperor, when Chinese fleets led by General Cheng-ho majestically sailed to the shores of Malaya, Java, Sumatra, Sri Lanka, Hormuz and East Africa.

The exploratory voyages of Cadamosto, Columbus, Dias and da Gama played a crucial role in the meteoric rise of the Portuguese in Indian Ocean trade. Politics and religion became more and more embroiled in the spice story. So did violence, like the gory episodes that punctuated da Gama’s circumnavigation of the Cape of Good Hope and then the Malabar coast.But even as the Portuguese seemed to have eventually grasped the elusive ‘Spice Islands’, they came up against serious competition from the Dutch.

Keay’s story begins with the idyllic image of a ripe fruit of myristica fragrans (from which we get mace and nutmeg) falling to the ground. It ends with the Dutch East India Company killing and enslaving inhabitants of Great Banda island and the eventual decline of the spice trade. Keay warns us that the story of the spice route is not a pretty tale. But this is an understatement: the story of adventure and discovery transmutes into one of greed and brutality. For the Portuguese and the Dutch, there was triumph over the ‘Spice Islands’. But for the people of the Banda islands, there was death and dispossession.