I had a tough time at my hotel, for no one seemed to know English. Call them the Drithrashtras of Europe for their blind love for their language... 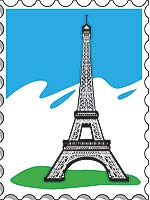 The French have long fascinated me for their pride in their language. Despite France being so close to England, English has had a hard time penetrating the consciousness of the Gauls. Contrast that with India: even an eight-hour flight can turn us into possibly the most Anglophilic race on the planet.

It had been five years since I roamed in Paris. I had expected globalisation and the internet to have brought English to the French mainstream. I was wrong. I had a tough time at my hotel, for no one seemed to know English. My hopes rose when my eyes lighted on the International New York Times in the hands of a lady at the reception. But an attempt to strike up a conversation in English was met with the unabashed demand that I speak in French. Call them the Drithrashtras of Europe for their blind love for their language, but the French have no romance with English.

Chinese visitors were to be seen everywhere across France. But unlike in most countries, in France it was impossible to find products with the ‘Made in China’ label. The iconic Paris-Gare de Lyon gave me 75 minutes to explore a bookstore as I waited for my train. Out of about 3,000 books and magazines, there were just a handful in English. By keeping English at bay, Paris has not lost its glory and its essence. In opposition to London, it stands as staunchly signficant as it ever was.

My visit to the French Academy was revealing in more than one sense. The acad­emy has set benchmarks for language-governing authorities in various regions of the country. It also sets standards for vocabulary, usage, pedagogy and other aspects of language, even for French taught at universities and academies abroad. This should be an object lesson for India, where English is gnawing at the edges of the lush and vibrant ecosystem of our regional languages. We need to think about why our pride in our languages is tepid. But for the concern the French have for their language, the anglicisation of French would have happened long ago.

Call it conservatism, but the French have prevented their language from going intellectually bankrupt. In this endeavour, the academy has been a watchdog, a soldier, a guiding light. To be a member of the academy is to be privileged to stand in judgement, along with other members, on some of the most nuanced aspects of how a language should be used. Governments may ignore the recommendations of the academy, but not for long. The academy has the complete support of the public. Widespread usage leaves the government with no choice but to follow suit. Our regional language boards should take heart from this, roll up their sleeves and focus their attentions on preserving our rich linguistic legacy.

Montmartre in Paris is a paradise for artists. Montmartre is perhaps as big as Gandhi Bazaar in Bangalore. There are always hundreds of artists and painters. Some will do impromptu caricatures or paintings of you. You may even spend a few days with artists and get to know their art, their stories, the inspiration behind their works.

There is a centuries-old pub that many ren­owned artists from across the world are known to have visited. It might as well be a marketing strategy, but it certainly gives a person a del­ightful feeling, real or imaginary, of having had a drink at the same table that might have once been taken by their favourite artist. There was one note in the pub that amused me: “I drink because I like paintings.”

The phrase ‘Indian Sta­­­n­­­d­ard Time’ has become a mockery in our country. The joke is that if you are on time for a function, you won’t find even one dark soul there to app­reciate your punctuality. If there was one thing I followed religiously in France and Switzerland during my 12 days’ tour, it was sticking to schedule. My appointment at the Le Monde newspaper was at 7:36 pm. I asked the friend who arranged this if they were serious about the timestamp. He responded with a knowing smile and asked me if I had been expecting a round figure, say 7:40 pm, for the appointment, and told me the French were punctual the way death is: death does not wait for timestamps with round figures. The next day, I left Paris for Basel. My train was to arrive at the station at 10:37 am. The announcement was made at 10:36 and the train doors slid shut smoothly at 10:37 am. The train moved with an eerie, elegant poise and reached Basel 13 seconds before schedule. The whole country functions like an exquisite clockwork, a buzzing, vibrant masterpiece in motion.

I heard a couple of good ones. How do you brainwash the French? Fill their underpants with water. What does a French driver do if he runs over someone? He reverses to make sure the bloke is dead.

The writer is the editor-in-chief of Kannada Prabha and the author of over 50 books; E-mail your diarist: vbhat [AT] me [DOT] com