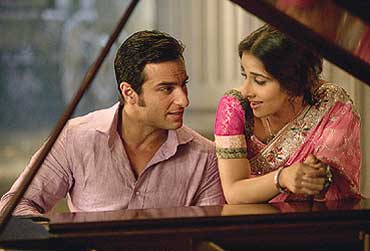 If Parineeta becomes a more composed spectacle than Devdas, it's because of the story. Saratchandra's strength lies in depicting Bengali women and Lolita, the protagonist, is no exception in this simple, timeless love story. Strong, silent and uncomplaining yet proud, newcomer Balan does justice to the role. As Shekhar, Saif is quite the slightly-spoilt, anglicised, educated young babu with proprietary feelings towards the little girl and neighbour he grew up with. Sanjay Dutt, too, is his towering, understated self. A surprise is Sabyasachi as the arrogant, conniving, Raj-relic Rai Bahadur, Shekhar's father, who comes in the couple's way. To be sure, the vile twists given to his character by Sarkar are nothing that Saratchandra ever intended or left unsaid—it's sacrilegious to think him actually making any of his villains call the heroine a slut (veshya), and here, both Shekhar and his father have a go at it—but then, which Hindi potboiler has ever worked without a scheming, fire-breathing villain?

Sarkar succeeds in producing a visually pleasing, nicely-scripted masala-mix, with superb music and probably the maximum number of Bengali film actors in a Hindi movie. Yet, the climax degenerates into a comic display of brawn and late realisation in the Dharam-Sunny mould. Even the love-making scenes make a forced, unaesthetic entry—all they do is make the viewers lose sympathy for Shekhar. The late-night piano scene had immense possibilities, all unfulfilled. Watching Rekha's item number is a classic example of mixed emotions—lovely '60s cabaret song coupled with a surprisingly aged, flabby dancer (this film may not do any good to the all-time sultry siren or our memories of her!). My biggest grouse: must bowing to market forces mean all Bengalis in Hindi films and music albums, irrespective of periods, have to wear heavy brocade silks and stay in palatial bungalows with Italian marble-floors and green-shuttered, stained-glass windows? In case Sarkar's next film, too, has a period Bengal background, he'd do better to look beyond Charulata, a timewarp in which most directors, including Rituparno, seem to have been caught!