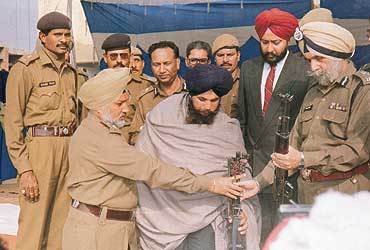 outlookindia.com
-0001-11-30T00:00:00+0553
Last week Union home minister L.K. Advani dropped a politically incorrect bombshell. He suggested an amnesty or selective pardon for policemen accused of human rights excesses against alleged Sikh militants and their sympathisers in Punjab. With state assembly elections due in February 2002, chances of a political consensus on this controversial subject could well improve, with 'return to normalcy' emerging as a strong electoral crutch for both the Akali-bjp combine, and the Congress, which is expected to return strongly in the polls.

While Advani's statement came at a public felicitation ceremony in Ludhiana, indications are that it wasn't exactly impromptu. Senior officials of the home and law ministries have been meeting regularly in the last fortnight to see what can be done "to boost the morale of the security forces".

The law ministry has reportedly indicated that a complete amnesty is impossible under the provisions of law. Since the charges in the case of Punjab were taken up strongly by the Supreme Court in the mid-'90s and the National Human Rights Commission, law minister Arun Jaitley thinks that direct governmental interference may be difficult. Well-placed sources are almost certain that the government will now appoint a panel to 'review' the cases.

Amnesty, however, may not mean a total pardon. There is a view in the home ministry that cases be examined on a one-to-one basis. Personnel involved in heinous crimes in the name of fighting terrorism will not be pardoned. But those whose charges appear doubtful could get clearance. Human right organisations are outraged. "This is a step towards fascism," fumes lawyer Prashant Bhushan, who sees this as the government's attempt to whitewash the sins of security personnel. Others ask that if relief can be provided to embattled security personnel in Punjab, why not in j&k and the northeast?

Courtesy the upcoming elections, however, Advani may find support from unexpected quarters—the Congress, for one. Says the party observer for Punjab, Motilal Vora: "Amnesty for the security forces is a must. After all, these people have fought secession tooth and nail." Punjab Congress chief Amarinder Singh, who may well head the state government if the party is voted into office, has already announced that these 'patriots' had been framed by the Akalis and high on his priority would be to propose an amnesty.

Even state chief minister Parkash Singh Badal, who had initially expressed reservations on the subject, joined Advani in the North Block to attend the series of meetings last week and has reportedly now warmed up to the idea of a general amnesty and is quite willing to discuss the modalities involved.

A total of about 500 Punjab police personnel of all ranks face criminal prosecution. They include six digs, eight ssps, 20 SPs, 35 dsps, 50 inspectors, 70 sub-inspectors, 90 assistant sub-inspectors, 50 head constables, 90 constables, 20 special police officers and 10 homeguards. The number keeps changing, depending on additions or deletions to the list. A number of these people are still serving; others have already superannuated.

Expectedly, the police personnel, who say they have been indicted by motivated human rights groups for merely following orders, have welcomed Advani's statement. The policemen, who have now formed a Zinda Shahid Police Officers Welfare Association, say they will en masse return their medals to the government if they don't get relief by October 21. Says SP Ludhiana, Dilbagh Singh, also member of the association: "When these alleged incidents took place, everyone downwards of the political leadership and top administration were duly informed and they approved. There was official communication. Several years later, out of the blue, we are told we are criminals." Some officials point to the ease with which prosecutions have been sanctioned, even in the case of central government officials. "The sanctions, which normally take years, have been granted within hours. None of these cases can stand the scrutiny of courts," alleges one official.

Former Punjab police chief K.P.S. Gill sees indicting policemen as "grave miscarriage of justice". Gill has been at the forefront of this save the policemen campaign since former Tarn Taran SP Ajit Singh Sandhu, also facing prosecution, committed suicide in May 1997. "Terrorism exploits the apparatus of freedom in liberal democracies and human rights rhetoric and litigation have become a potent weapon in their hands. We have been witness to sustained campaigns by terrorist front organisations at international fora, including the UN, to project themselves as victims of human rights abuse by India," he told Outlook.

What about the mass graves at Amritsar and Tarn Taran and unidentified bodies found floating in canals? "There were no graveyards, only public places of cremation. Floating bodies were a figment of peoples' imagination," says Gill, who admits that some excesses did take place, but the perpetrators were identified and punished.

Human rights groups see Advani's proposal as a step towards a police state. Says Supreme Court lawyer and member of the Committee for Information and Initiative on Punjab, Nitya Ramakrishnan: "It is a clear signal to security forces to go ahead. All wings of the state structure connived in making Punjab's people utterly incidental to police governance. The vocal elite approved." As to the role of human rights agencies, she says that just as there are criminals in police uniform, there could be motivated people in human rights organisations, but how does one arrive at the truth unless there is a proper inquiry?

Ashok Agarwal of the Committee for Coordination on Disappearances in Punjab says there is no information about 12,000 to 15,000 people. "There is a road block. The Punjab Police is not even willing to show us documents and records ordered by the nhrc. They argue that we will do mischief if shown records. Can I know what that mischief is going to be? If people were not summarily picked up and executed, why are they hesitant to show us files?" he asks.

Clearly, Advani's gesture has re-raised questions lying dormant for close to a decade now. But with a third election on the anvil in a state which was practically 'given up on' in the mid-'80s, the turnaround remains remarkable. "There is no precedent like this return of normalcy," says Gill. And frontline political parties seem only too ready to embrace that position.