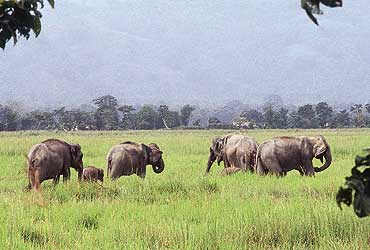 The many theories doing the rounds about the cause of the deaths have only added to the confusion. Initially, park officials blamed the deaths on an outbreak of anthrax, a killer disease which claimed at least 150 elephants in the area between 1914 and '15. Then, H.P. Phukan, the Nameri park in-charge, announced that two of the elephants died of liver fluke—caused by a parasite which affects all grazing animals. But he wasn't sure why the rest of the beasts perished. Experts from Guwahati's Veterinary College have now been engaged to reach a conclusion. The state has even sent an sos to the Centre to depute experts to help them work out a solution.

Park authorities haven't even ruled out the possibility of encroachers poisoning the elephants with diathene, a pesticide used in the adjoining tea gardens. In fact, increasing encroachments into natural elephant habitats in the northeast in the past decade has resulted in a rising conflict between man and animal. Encroachers have cleared large tracts of forests in Sonitpur district in northern Assam to set up houses and cultivate land. The upshot: wild elephants have claimed around 400 human lives in Assam in the last five years.