The story of a safe and cosy haven turning vulnerable and insecure. 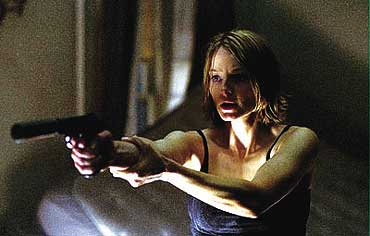 It's the title sequence that sets the tone for Panic Room. The credits hanging from the New York skyscrapers (a throwback to North By Northwest) and the brooding music (almost a replay of the Psycho theme) suggest an exploration of the dark side of our anxiety-ridden urban existence. The story is about a safe and cosy haven turning vulnerable and insecure. We move into a sprawling Manhattan mansion with divorcee Meg Altman (Foster) and her suitably-dour daughter Sarah (Stewart). The house, otherwise an endless open expanse, has a claustrophobic little pigeonhole of a room, complete with a surveillance system, where the residents can take refuge from unwanted intruders. And sure enough, they come calling the very night the mom-daughter pair moves in. The two lock themselves in the Panic Room while the three burglars want to break into this impregnable fortress to get their hands on the millions of dollars stashed away inside.

David Fincher's Panic Room is quite like Rear Window in the way he generates movement within a fixed setting. However, in Hitchcock's classic, the camera is ever so genteel and unhurried. In the 21st century eye-view of Panic Room, it breathlessly hurtles through spaces. The camera moves up and down, forward and backward, playing endless visual games. It swoops from room to room, down the stairways, up the elevator, along the gas pipe and wiring, crashing into plugpoints and keyholes. But this technical razzle-dazzle is just for its own sake—it doesn't add any complexity to the narrative. Fincher, who has mastered shadowy themes in films like Seven and The Game, is curiously lacking depth here. The ostensible darkness doesn't penetrate past the murky, dim lighting of his cinematic canvas. There are no great moments of tension except perhaps the sequence when Meg moves out of the room to take her mobile in or when she coaxes the intruders to give a shot to the diabetic Sarah. At times, the cat-and-mouse plot becomes too predictable—you could even pick a few gaping holes: the breaking into the house by the threesome seems a tad too easy. One of the intruders is always shown hooded, making us anticipate some startling revelation. Sadly, none really exists. Why the mask, we ask.

Meg's role doesn't require much histrionics from Foster and she doesn't try too hard either. In fact, the one who manages to impress the most is Whitaker as the security technician-turned-burglar. The non-violent guy gives the film its much-needed moral predicament in the end when he saves Meg from his partner in crime. You almost wish at that juncture that he would get away with the loot. He doesn't. Leaving you utterly dissatisfied, almost wishing you could rewrite his fate, and the film as well.