Get federal. The Congress has to revisit its strategy vis-a-vis potential allies if it wants to make a serious play for 2019. 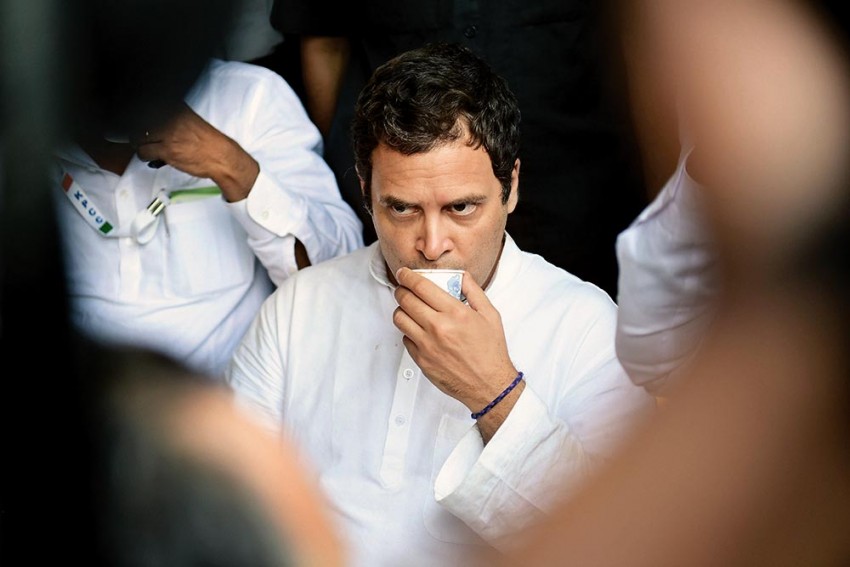 Deep-Browed
The Congress president takes stock and tea during his yatra through Karnataka
Photograph by PTI
Pragya Singh May 17, 2018 00:00 IST Palm Fringed? 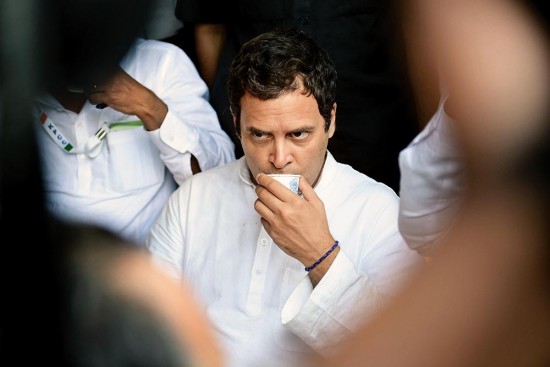 How Congress Lost In Coastal Karnataka

The promised second coming did not mat­­erialise in the end. Yes, the flock did not really desert ­Sid­daramaiah, the man from the shepherding ­Kuruba caste who learnt his alphabet by writing on sand. Seven lakh more Kannadigas voted for the ­Congress than for the BJP—though the vote’s distribution means that the party’s socialist icon has to bow out from the stage. Yet, the hung verdict in Karnataka contains lessons for the ­Congress as it attempts to write a fresh script in the sand, going into 2019.

It will especially try to evolve a new strategy in states with a strong regional party. The humbling tally of 78 out of 224 seats, well short of the midway mark, holds up an unmissable counterfactual poser to the Congress: what if they had a pre-poll tie-up with the JD(S)? The results thus revive the idea of a federal front. Should the Congress abandon the idea of fronting one, ceding space to an anti-BJP phalanx? Should it be in competition with other potential coalition leaders? Or does it, para­doxically, bolster the idea of regional parties looking for synergy with the Congress? As everyone confronts these questions, the verdict has also left the regional parties deligh­ted because now the Congress has to go into coalition-making without being able to dictate terms: its old hubris.

There’s no dearth of ‘local’ poll minutiae that may have a resonance elsewhere, in terms of parallels, as party strategists try to slice and dice the results for universally applicable lessons. “The Congress got a higher voteshare than the BJP but it lost the day it tried to do without Lingayats and Vokkaligas,” says a senior Congress leader and former Union minister. Also, in his assessment, Dalits seem to have voted BJP because of the Mala-Mad­iga conflict—the Congress leadership has Madigas as the Dalit face and Malas feel left out. “These are leaders entrenched in the party structure. People who at one time represented the oppressed began to represent the status quo,” rues this party leader.

How to take all this forward going into the battles of Rajasthan, Madhya Pradesh, Chhattisgarh, and then 2019? “We can’t even rule out an earlier-than-expected Lok Sabha election,” says another Congress leader. “Our decisions in terms of candidates and leadership will determine our fate.” These are precisely the areas—candidates and leaders—where the Congress gets pilloried by pundits and insiders alike. The party is still restructuring its state leaderships, with Lok Sabha elections not a year away. This unsettles cadres and upper echelons alike, and confuses voters.

Its own internal structure is one thing, its external relations are another. “The biggest debate in the Congress today is whether we should try and win elections everywhere or let regional parties do the job of defeating the BJP,” says an AICC member. “Rather than undercut the BJP’s rivals, we must take two steps back, let other parties take credit for wins. This is for survival’s sake,” he says.

As Congress leaders confront the wreckage of nine lost state assemblies over four years, a view is taking hold that big ­sacrifices need be made—the question is, how big? ­“Sometimes,” as a regional leader of a party that has allied with the Congress in past elections says, “defeat can be a better instructor than victory”.

Next year will exert multiple pressures, starting with how the national narrative captured by Prime Minister Modi can be rewritten by Rahul Gandhi and his allies. “Rahul Gandhi’s leadership cannot be written off. Despite this loss in Karnataka, Opposition unity will take place,” says RJD spo­kesperson Manoj K. Jha. “But this loss will make the Congress more flexible towards regional parties.”

There are good reasons to compromise: “The Congress can’t even assume that other parties won’t join a BJP-led alliance if the situation arises. After all, everyone except the RJD, SP and NCP have at one time or another done so,” says Pune-based political commentator Suhas Palshikar.

Sacrifice is a tough call for a party trying to create the ­impression of a renascence, but the Congress could hearken to the example of Uttar Pradesh. Here, a combined SP-BSP assault swept Gorakhpur and Phulpur, demonstrating the ­viability of alternative fulcrums. The Congress fielded can­didates in both these bypolls and lost, perhaps achieving ­nothing more than eating into the margins of the subaltern-­flavoured SP-BSP combine.

“If Congress doesn’t align with the BSP bef­ore 2019, they will lose again in UP,” predicts Satish Prakash, a Dalit ideologue in UP. His reason for believing so is that chief minister Yogi Adityanath has weakened the Hindu social alliance with his overly strong Rajput vibes—but not by so much that the Congress can woo privileged castes away from the BJP. 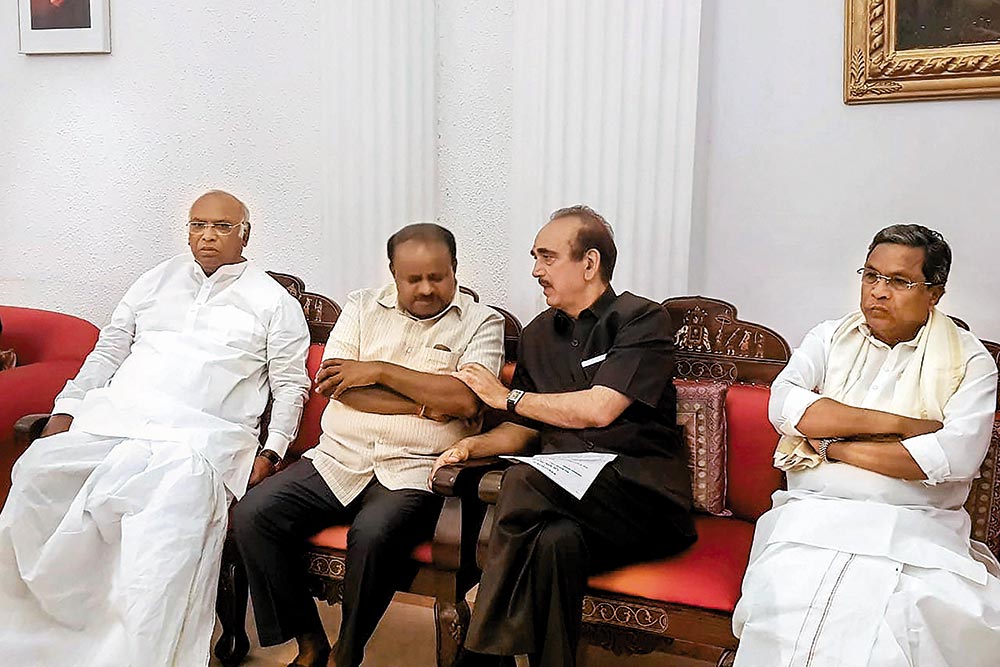 A top BSP leader is also assertive after the Karnataka verdict: “The verdict is very good for regional parties.” In his view, federalism requires the Congress to restrain itself from active participation in non-bipolar states. “The BSP wants an alternative but the Congress is partially responsible for this situation—it needed to be taught a lesson.” A Congress leader from Uttar Pradesh accepts the need for humility in ambitions. “We can demand, as a right, perhaps nine Lok Sabha seats in a UP tie-up. Otherwise, it’s pointless to contest just to lose,” he says.

Karnataka also proves that Dalits are not voting emotionally even beyond the cow belt. “They are establishing a separate ide­ntity, demonstrating political prowess and dissatisfaction with their 125 Dalit MPs. But they’re not swayed by Congress either,” says Prakash. Hence, the BSP is both a potential ally and a thorn in the side of the Congress. “Dalits could have voted for the JD(S). It demonstrates no party can take Dalit support for gra­nted,” says CPI leader D. Raja. The Congress, he feels, will have to accommodate secular parties, including the Left, even if there is no direct contest between them. “Regional leaders must be allowed to win in their respective regions,” he says.

Gujarat, another state where the Congress came up short recently, offered another collateral peek into micropolitics. Here, the BSP, NCP and a breakaway party led by former JD(U) leader Sharad Yadav managed to tap into votes from among tribal groups, trade unions and other sections. “Now, hope­fully, Congress will review and draw the right conclusions from Gujarat and Karnataka,” Raja says.

The other question is, should the Congress fight every rival tooth and nail—for instance, the AAP in Delhi? The balance of wisdom may be in lying low, but not contesting risks both viability and prestige. “It’s precisely for this reason that the Congress can’t make room for regionally strong parties,” says Palshikar. The leader from UP agrees—“We have to fight AAP. It has undercut us way too much,” he says.

“The biggest debate in the Congress today is if we should try and win elections ­everywhere or let regional parties defeat the BJP,” says an AICC member.

The fact that the BJP has lost 10 bypolls in a row in UP, MP, Rajasthan, Punjab and Bihar since 2014—lowering its Lok Sabha tally from 282 to 272—gives the Opposition reasons to believe in the BJP’s decline, incentivising the general trend tow­ards putting up a united front. As the former Congress Union minister says, “The BJP won’t do well in Haryana. In Rajasthan and MP, there’s anti-incumbency in our favour. In Gujarat we won’t lose badly. With Sharad Pawar, we can sweep Maharashtra. Modi will need every seat everywhere.”

Yet, Palshikar feels 2019 is not a “foregone conclusion”. Despite the fact that the BJP “would surely lose seats in the north, central and western India,” Karnataka shows it has “a ­psychological advantage and can offset its losses by winning seats in new territories. And it would be willing to acc­­­om­modate smaller parties there.”

Where a federal front can suss out an opening is precisely in those places where the BJP will face its toughest counterparts in negotiations—the DMK-AIADMK duo, the TDP and the TRS, perhaps even the Shiv Sena. “The crucial issue is that if the BJP needs support from over 50 MPs beyond its own, that would be a tough task for the present authoritarian BJP leadership,” points out Palshikar.

After Karnataka, the BJP’s attention will turn to Telangana—here a “discreet” understanding with K. Chandrasekhar Rao is often alleged. Yet, the TRS leader is a potentially mobile element—he responded to Mamata Banerjee’s overtures for a federal front and he also called H.D. Kumaraswamy today. Rao is not available for any alliance with the Congress though, in a near-bipolar state. The anti-Congress sentiment in Andhra Pradesh has dwindled, say party sources. But there’s no possibility of an alliance there either, despite the BJP and TDP falling out. Jaganmohan Reddy of the YSR Congress cannot openly align with the BJP as his votebase in Rayalaseema includes Muslims and Dalit Christians. “But there are serious cases hanging over Jagan,” says the former Union minister. “He can ally with the BJP post-poll rather than pre-elections. If Jagan wins 10 of 25 seats in Andhra, he will give his 10 to Modi.”

Jagan’s emergence can be, in a way, attributed to the Congress’s past challenges with allies. Following his father’s death, Jagan asked for the CM’s post, which the Congress high command declined. That estrangement and later the formation of Telangana was a big blow to the Congress—undivided Andhra contributed over 30 MPs to the UPA in 2004.

But the former minister rules out Jagan’s return to the fold. This, perhaps, shows the limits of dynastic succession. The Congress can distribute tickets but reserves dynastic rule for its own first family. At the same time, if all leaders demand chief minister’s posts for their offspring, the central ­leadership’s sway is eroded. But alienating regional satraps also minimises the Congress’s access to local demograp­hic pools. Because, as the senior politician says, any viable Congress formula has to “build on the caste chasm, especia­lly in rural areas.” Isn’t that cynical politics? No, he insists: ­“Religion was invented to counter caste.”

Then there’s the fulcrum that was central to the UPA but which now seems almost chimerical: the compact between the ­Congress and the Left that gave rise to so much of the ­landmark social ­welfare legislation of the Manmohan Singh years. D. Raja’s ­admonitions apart, a large part of the reason for the near-­divorce lies with the internal dynamics of the CPI(M). And now, not only does that partnership lie in tatters, but the Left itself has ­plummeted from 61 seats in the Lok Sabha to contemplating an existential doom. As the next ­season of alliance-making heats up, leaders from both sides may jointly ponder their fate.