Amol Palekar hesitates in going fully mainstream, nor does he go wholly alternate — giving us an unsavoury mix of two widely different aesthetics. 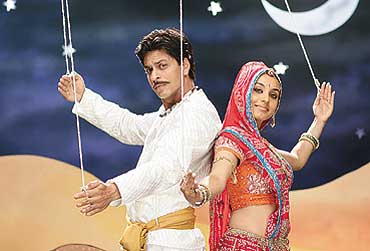 Paheli is like a beautiful tourism brochure for exotic Rajasthan. Majestic havelis, colourful costumes, dancing puppets. It makes for a sumptuous visual feast. But for any film to work, you need more than pretty pictures, you need a strong emotional connect with the audience which Paheli is unable to make. The problem lies in the dreary screenplay. Amol Palekar hesitates in going fully mainstream, nor does he go wholly alternate—giving us an unsavoury mix of two widely different aesthetics. He should have either stuck to his brand of intimate cinema or given the film the emotional sweep and the larger-than-life drama its huge canvas demands. His penchant for understatements backfires badly in Paheli's context, feelings don't just remain muted, they get badly dwarfed by the sheer opulence of the frames.