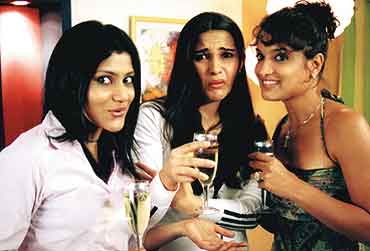 An interesting take on the rich and famous, the film looks set to become the first hit of 2005. It's about a young journalist, Madhavi (Konkona), who covers the Page 3 beat and interacts with society high-fliers. It also gives us a glimpse into her personal life, about her growing up—from being a happy youngster in a vacuous world to facing nasty betrayals, disillusionment, cynicism and the final, pragmatic compromise with life's many ironies. Hardly the kind of film to make commercial sense, but it does. The trade puts it to sheer economics, after all it has been made with a modest Rs 2.5-crore budget. "It is doing well in cities but that's enough for it to be called a success because of its low cost," says Film Information editor Komal Nahata. Delhi distributor Sanjay Mehta is ecstatic: "We released Page 3 in North India with 12 prints, in the second week we are adding another 10."

It is certainly not a great film. It could have been more refined and incisive. But it makes fairly engaging viewing. Bhandarkar is sensible, even though his idea is new the execution is never consciously self-indulgent or esoteric. In fact, Bollywood's traditional melodrama is retained; a reason why "mass" entertainment values don't get diluted for "class" novelty.