A wild tale of Portuguese Goa, and a wacky heroine.

Skin
By Margaret Mascarenhas
Penguin Rs:250; Pages :257
It's exciting to read a first novel because one gets a flavour of the difficulty of the process of writing. There are bits in Margaret Mascarenhas' novel that take your breath away, and bits that seem somewhat threadbare, where the author's intention reveals itself a little too clearly. At the same time, it's also terribly exciting. You don't know where you will be taken, or what you will be shown. As a first novel, Mascarenhas has given us something memorable—a wild tale of Portuguese Goa, and a wacky heroine.

The book quickly draws you into the world of a cultural hybrid called Pagan, who is searching to fill the void inside herself, but in the process somewhat unexpectedly discovers her roots. But her roots, we discover, are not simply Saraswat Brahmin Goan Catholic on one side and Southern Baptist American on the other. They are far more mixed-up than that. There is slavery and Africa in her blood, and Portugal too. There's love, deceit, emotionally impotent men and powerful though unfulfilled women, extra-marital affairs and illegitimate children. And in the end there's Pagan, a heroine who is global right to her very genes.

From the start the reader is made aware of the fact that Pagan looks like a white girl. She has green eyes, light brown hair and creamy skin. Most people see her as a white girl and treat her as such, but Pagan knows she's not white in her soul. The dilemma is brought out beautifully in little Pagan's friendship with Yvonne Lafayette, a black girl in her all-white school, with whom she feels most at ease. The other little girls give Pagan a white stone to 'protect' her against becoming black like her friend. Pagan takes the stone and in an effort to compromise with her troubled heart she shows the stone to her friend. Yvonne bursts into tears and never comes back to school again. Pagan never forgets that first betrayal. It is where her need to get 'under the skin' of things begins.

Even in India, Pagan's pale skin is envied and admired. It makes her the darling of the nuns at her convent school in Mangalore and of her Goan grandmother who sees in Pagan's skin colour living proof of her family's aristocratic lineage. But Pagan's heart is drawn to the dark-skinned people—her father Francisco, her mother's nanny Esperanca who taught her to worship a shape-shifting, form-changing African goddess, Xico her boyfriend, who is half-Lebanese and half-Brazilian. More important, she dreams constantly of a woman with "honey coloured skin and large compassionate eyes".

Serendipitously she gets a telephone call that returns her to India to where her grandmother is slowly dying in hospital. To take her mind off her grandmother's death, her aunt Livia tells her the family history. Only, this time, the adult Pagan knows it is a story and that beneath it, there are other stories that aren't being told. As the grandmother dies, Pagan slowly finds out the real history of her family, and in the process comes to understand herself.

There are a few patchy bits to Skin. For one, there's a rather unnecessary descent into magic realism where the young Pagan and her friends leap into a painting of a Brazilian forest and find their way to a lake in the middle where they each make a wish.... It's one departure from the otherwise very successful use of magic realism in the book.They risk turning Pagan into an Enid Blyton character rather than the introspective and tormented person she really is. The book is beautifully produced, with a very evocative cover photo by Dayanita Singh. 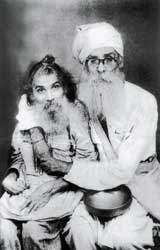