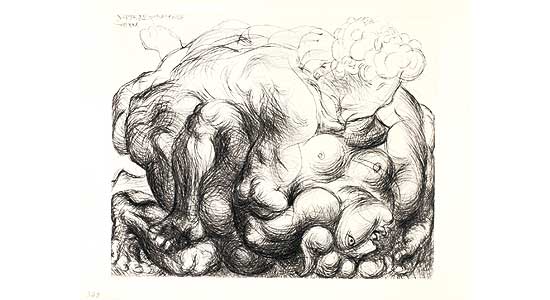 It arrived in India last month and has been under wraps since then. Pablo Picasso’s 100 copper engravings, the Suite Vollard, which represent his most creative phase, are now on display at the Instituto Cervantes in Delhi. The collection from Fundacion Mapfre is prized for its excellence, and relays some of the maestro’s varied themes, made between 1930 and 1937, from the artist and his model, the battle of love to Rembrandt and the Minotaur.

If Picasso has been the reigning deity for artists in India for several decades, works of the master have been appearing in one way or another in the country since the beginning of this century. Following the large show of his paintings and sculptures from the Musee Picasso in 2001, the ceramics and prints from the Grosvenor-Vadehra gallery, London, in 2006, we now have the 100 engravings of Picasso which were sponsored and promoted by collector Ambroise Vollard.

“Picasso was essentially Spanish in his roots,” points out Oscar Pujol, director, Instituto Cervantes. Not surprisingly, The Sculptor’s Studio—the 46 works on the artist and his muse, or artistic creation itself—forms the core of this collection. In one of these, the sculptor (Picasso) surveys both the model and the bust as if he’s trying to judge which is more beautiful. In another, he casts aside the beautiful model wearing a mask and surveys his own handiwork with longing as well as anguish for it won’t come to life. In works of great tenderness and sensuality, the artist and his model recline after a period of feverish lovemaking while the sculpture is the calm onlooker. These etchings, which convey different aspects of the same reality, are done in masterful strokes where the graceful curves of the bodies are revealed in delicate, suggestive lines without the spaces being filled.

During this time, Picasso was besotted by Marie-The’re’se Walter, a 17-year-old girl, who was to be the passionate subject of his works for the next few years. There followed a period of proliferating creativity as he set about making some of his greatest works. In 1930, he had bought a 19th-century chateau in Boisgeloup which provided him the necessary space for studios and workshops of all kinds, including a small engraving press. The works that followed were to be embalmed in art history for their creativity.

Like with his paintings and sculptures, the genie of invention introduced new methods in his engravings, mixing several techniques from etching to aquatint and even reusing India ink and sugar for layering the plate. It was while experimenting with different varnishes and dyes that he made a portrait of Rembrandt and, when the varnish cracked, began scribbling on top of it. Magically, Rembrandt’s face reappeared and he adopted it as his motif to explore the history of art. In an interior scene where the master’s face peeps through a curtain to look at a nude woman wearing a veil, he looks tense and confused as if contemplating his methods.

The wellspring of Picasso’s creativity lies in eroticism and the female body. While being deeply sensual, it also unleashes a violent destructiveness, as it does in his Minotaur works where the half-man, half-animal ravages the young woman. Indeed, in his Minotaur series, he’s at his most passionate where the relationship between the monster and the woman are played out in various innuendos. Now it’s the Minotaur-sculptor who caresses her, who sleeps, his proliferating, gruesome body observed by the model, and who overpowers her with wild abandon. The calm serenity of the earlier works gives way to the untamed animal in man who threatens the very core of his creativity. When at last he’s vanquished, it’s in the bullring almost as if the studio space is transformed into a theatre of war.

The Minotaur is the most forceful and expressive of Picasso’s creations. These also reflect the dark undercurrents overtaking Europe as the clouds of World War II begin to gather, a virtual play of life against death. No wonder the shape of the blind Minotaur finds its way into Guernica, made in 1937, one of the most anguished pleas against war.

In some of the works, the Minotaur is painted blind, being led by a young girl holding a bouquet of flowers. In another, she holds a pair of doves, symbols of purity and peace, as the pair walks along the edge of a stormy sea. If lack of vision is like death for the artist, the young girl is a lifeline to a brighter, more visionary future. For if anything was true of Picasso, it was the fact that his work was never conclusive. As he stated, “Finish a work! Complete a picture? How absurd! To finish an object means to finish it, to destroy it, to rob it of its soul, to give it the puntilla, as to the bull in the ring.”

(The author is an art historian and has also written a biography of Amrita Sher-Gil.)

Please Ban This, By Law Or By Judicial Decree