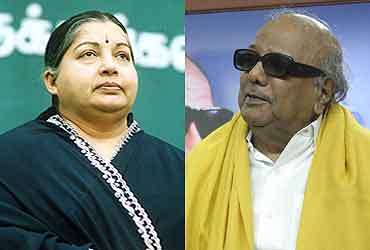 L.K. Advani kicks off his Bharat uday yatra from the state (Kanyakumari), but observers say the BJP faces the prospect of its tally (currently five) declining. The AIADMK has given the BJP very little, with Jayalalitha virtually dictating who should contest and who shouldn't. Denied tickets, former BJP Union minister S. Thirunavukkarasu and state BJP heavyweight L. Ganesan have been openly resentful. Of the seven seats it's contesting, including Pondicherry, the BJP stands a chance only in Nagercoil and Coimbatore.

The DMK, which has mobilised a grand alliance of all secular forces and has the Congress on its side, hopes to do much better than the AIADMK-BJP combine. At least that's what the poll arithmetic points to. But strangely, the success of the alliance could also mean the shrinking of the DMK's area of electoral alliance. Already, the DMK is not visible in large parts of Tamil Nadu. The number of seats the party is contesting—15 of 40 (including Pondicherry)—is an all-time low, against the AIADMK's 33. The DMK is fighting only three of the 12 constituencies in the 10 southern districts where the Mukkulathur community (an umbrella intermediate caste category comprising predominantly the Thevars) account for a sizeable vote. In southern Tamil Nadu, the DMK's presence over the years has seen a steady decline. In 1999, the party contested 19 seats and won 12. It had fielded six of its candidates in the south and only three of them emerged victorious. In the May 2001 assembly polls, its southern harvest further dwindled. Contesting 45 of the 70 southern seats, it won a paltry three. This time, the DMK, by giving away most seats in the south to the Congress and MDMK, has unwittingly acknowledged that its political space has been shrinking.