After a troubled integration in Israel, Indian Jews stay on but still cherish the India in them 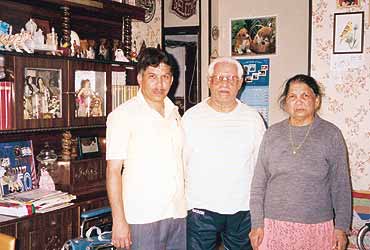 outlookindia.com
-0001-11-30T00:00:00+0553
The town of Beersheva lies in the Negev Desert in southern Israel. The palms that line the wide roads provide little shelter from the sweltering heat. As you enter the city, the swank Ben Gurion University gives the impression of prosperity, a town to rival the vivacity of Tel Aviv. But look closely at the outlying buildings and you notice a string of worn-out housing estates. This is Tel Aviv's poor relative. It's also home to 10,000 Bene-Israel Jews, originally from Maharashtra.

In Israel, the Indian Jews form an estimated community of 60,000, consisting largely of Cochin Jews and the Bene-Israel. Very few Baghdadi Jews, who tended to be more affluent, migrated to Israel, preferring to settle in Britain or America.

Of all the Indian Jews here, the Bene-Israel had the most difficult time integrating into their new society. As Dr Shalva Weil, an anthropologist at the Hebrew University specialising in Indian Jews, explained, "Unlike the Cochin Jews, who were put into agricultural settlements and became wealthy, the Bene-Israel were placed in peripheral towns such as Dimona, Ashdod or Beersheva, not in Tel Aviv or Jerusalem. They are now on the margins of society; this was not the case in India, where the Bene-Israel played a prominent part, such as Nissim Ezekiel, who was awarded the Padmashri. In Israel, Indian Jews don't occupy equivalent positions."

There were two main migrations of India's Jews to Israel. The first came with the almost simultaneous partition of India and Palestine in 1947 and 1948, which led to the creation of the religiously exclusive states of Pakistan and Israel. In both cases, Partition sparked an unprecedented transfer of communities from towns and villages in one nascent state to another. While in India Hindu refugees flooded in and Muslims moved out, in West Asia almost 750,000 Palestinians were forced out and replaced by Jews from across the world, including those from India.

Raymond Abraham was one of those first immigrants who arrived here in 1949. Now a sprightly 78-year-old, Abraham was born in Karachi and fled to Bombay during Partition. Life in the new city was grim. "Then in 1949, when I was 18, some people came from Israel and asked us to emigrate," said Abraham. "Having no home in India, we put our names down. We sailed to the port of Haifa where we stayed in a camp with Jews who had come from all over the world. Then we were put in groups and distributed around the country. Only Indian Jews came to Beersheva where we again lived in tents. There was no food, no water, but it was a good time. We wanted to build our country and people gave you respect."

For many Indian Jews, however, their arrival was not so rewarding. In the '50s, Indian Jews were among the darkest of all the new immigrants and experienced racism. As Reuben Raymond, a community leader, explained, the reality of life in Israel from what they imagined it to be was a shock to many Indian Jews. "In India, we never had to fight for our rights but in Israel we did, and this was something new for us," he says. "In the early '50s, people had a problem because of their colour. They were subjected to differential treatment in everything. In employment, they got bad jobs and had less money. One group even returned to India in 1952."

The biggest insult to the community came when the Israeli government refused to recognise that the Bene-Israel were real Jews. So from 1962 to 1964, the Bene-Israel held a sit-down strike in Jerusalem until their status as Children of Israel was officially acknowledged. This triggered the second largest migration of Indian Jews to Israel, during which Reuben's family arrived. Since then, the Bene-Israelis have come to feel accepted in their new homeland. Many of Abraham's generation now have children and grandchildren born in Israel. Although, as Abraham admits, while the older generation still speak Marathi and Hindi and cook Indian food at home, the Israeli-born generation speak only Hebrew and know little of their Indian heritage.

This is something that worries Reuben, who is involved in a committee to build a museum to preserve and promote the heritage of the Bene-Israel. "We have tried to preserve as much of our Indian life as possible. We have cricket and hockey teams and spice shops. We have kept our Indian folklore, songs, and teach Indian classical dance. Through our museum and cultural centre, we can establish good ties with India. We can import teachers to teach the younger ones Marathi."

It is clear that the bond with India is still cherished. As Reuben explains, "Other Israeli Jews don't like their motherland because they were driven out but we weren't. We can never forget what India has done for us. India is still our motherland and Israel is our fatherland."

"Vajpayee Is Taking A General's Approach"