Most hail from humble backgrounds, are helped by parents; the forces give them respect and honour 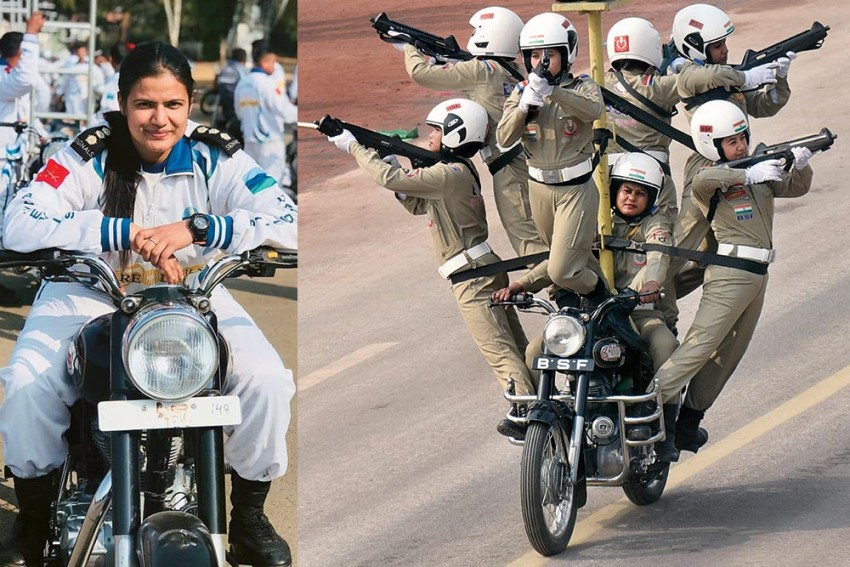 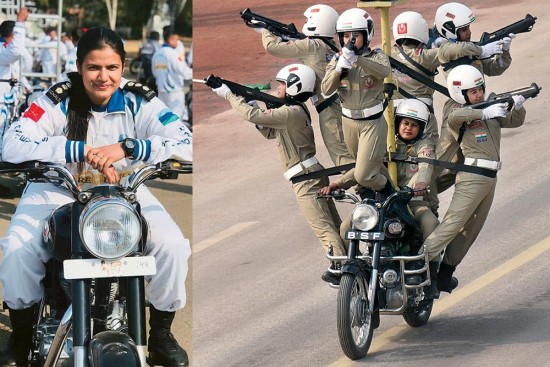 Last year, Captain Shikha Surabhi became the first woman to lead a formation of 36 men and nine Bullets of the army bike display team at the Republic Day parade. But even as she readied for the performance of a lifetime, she philosophised to a journalist, “Nothing can beat this feeling. But, in life, you should crave for the next thing – and there are more things to do ahead – for the country and myself.” This, in a way, sums up the attitude of most riders.

The fact remains that a large proportion of those who join the security forces hail from villages and small towns. Surabhi, for example, is from Arrah in Bihar, but was raised in Hazaribagh (Jharkhand). Like millions of Indians, she went to a Hindi-medium school. Her interests in sports and adventure were kindled by her mother, who was a sports teacher at a school in Ranchi. Luckily, from the beginning, Surabhi’s chosen sports were the aggressive, adventurous ones, like kick-boxing and wrestling.

It was logical for her to choose a profession that promised excitement. Police was her first choice; later, adventure got mingled with nationalism, and she opted for the army. Her passion for extreme adventure continued. She was part of an army mountaineering team that trekked to Gangotri glacier. Her first posting was in Arunachal Pradesh, a perfect setting for the outdoors. She did a bike trip, from Shimla to Ladakh, over eight days. All these taught her skills, and changed her body in ways that helped her later.

For example, the lessons from the Ladakh trip included the ability and the flexibility to handle different terrains, different weathers. She had to ride through heavy rains, muscle through wet mud. It also gave additional strength to her hands and legs. The Gangotri glacier trek taught her how to work as a part of a team, and not for individual glory. An individual can play a crucial role, even if she is a mere cog in a giant wheel. This is invariably the case in motorcycle display formations and stunts.

Three months before the parade, she volunteered to be part of the bike team. From her posting in Bathinda, Punjab, she joined the training programme in Jabalpur, Madhya Pradesh. And realised there was a lot more to learn—from the basics to the most complex. For example, she had to learn to kick-start a bike, as the Bullets used by the team had no electronic ignition. Then she had to learn to balance the bike with her feet, and not her hand. This took a while, as it is unnatural, even illogical.

However, the most important thing in a team display is the relationship between the members, and how the others accept a new entrant. Surabhi, who completed more than four years in the services, told a journalist that initially her colleagues were worried whether she could learn. Whether she was strong enough, both physically and mentally? Later, she confided that the members felt that she learnt faster than most of the others.

It is this acceptance as an integral part of the team that’s the real crossing point – the point beyond which one is no longer a stunt driver, but a daredevil. The rider has crossed an imaginary line in her head that puts her in a different category, and under a different level of scrutiny. This is the time when confidence levels are high, and optimism soars. The evening before the 2019 Republic Day, it seemed as if it would rain the next morning. This is usually the case in Delhi each year around that time.

Heavy rains can make the bikes unsteady, and difficult to balance. As Surabhi looked at the dark clouds, she shrugged and told a journalist, “Rain or no rain, we have to perform 100 per cent.” That’s it. The external elements don’t really matter. Everything hinges on the inner self, confidence, realisation of one’s skills and an optimism that the team will act as one being, not several components, when the time comes.

How Many Acres Of Print Does A Baron Need?