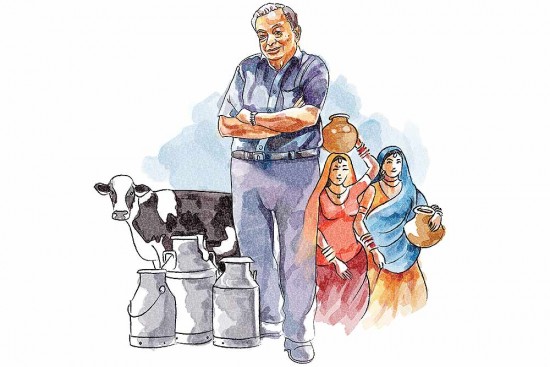 It was this energy that was unleashed when Dr Verghese Kurien along with Shri Tribhuvandas Patel, embarked upon the journey of organising scores of small farmers who had been marginalised in the social and economic realm. The inspiring leadership of Patel and professional commitment of Dr Kurien was first manifested when the small Kaira District Cooperative Milk Producers Union, often known as Amul Dairy which had begun its journey with just two village dairy cooperative societies and 247 litres of milk in 1946 was entrusted to Dr Kurien in 1950. Miraculously, this small unknown entity started growing from strength to strength; a growth which has been consistently on the rise over the past seven decades. This 247-litre milk dairy is now a globally respected brand, owned not by any corporate bigwigs or a conglomerate of landlords but by millions of farmers who individually would be too small to matter even in their own societies but their collective cooperative strength invites grudging respect from the biggest of global dairy giants.