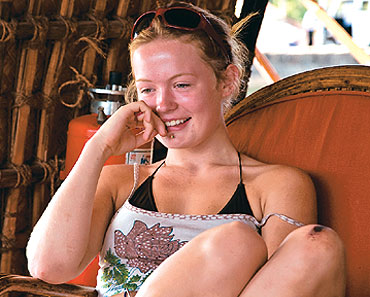 outlookindia.com
-0001-11-30T00:00:00+0553
Thrusting awkward questions at a bereaved parent is enough to make the hardest hack cringe in self-disgust. But on occasion, it is called for—as in the case of British teenager Scarlett Keeling's murder in Goa. However, the Indian media was so busy bashing the Goan police for their disgraceful cover-up that they lost sight of Scarlett's mother's appalling negligence.

Criticising Fiona MacKeown is difficult. She has been resolute and resourceful in uncovering the truth in the face of callous indifference from the police. Throughout her ordeal, she has remained calm and dignified. But what possessed her to leave 15-year-old Scarlett alone in a foreign country—in Goa, while she set off to tour Karnataka? Parents try to find a balance between their urge to protect their child and their child's demands. But there was nothing to wrestle about on this one.

Nowhere in the world do you leave a girl of that age alone. Not even at home in Devon, England. Certainly not on holiday in a place where there's no one to keep an eye on her, and certainly not in a place like Goa, especially when you are aware—as MacKeown has admitted to being—that your daughter has got involved in the sleazy drug and sex scene. (Although to be fair, being on holiday can do funny things to one's judgement—either pushing it towards excessive caution or excessive optimism).

MacKeown has said that Scarlett insisted on staying back in Goa, threw "a strop", and she gave in. She gave in? This was not about going to a party or buying a dress. It was an issue of her safety. It was a perfect example of the crisis that currently assails some British parents, as well as some Indian parents too: the inability or unwillingness to impose their authority.

The results of this laxity in Britain can be seen everywhere. Aggressive, unruly, malignant yobs with no fear of parents, teachers or any adult. Bad parenting has risen to such levels that a British school union leader complained recently that schools now had to teach children everything—from basic social skills such as how to hold a knife and fork, to moral values. Schools were replacing parents and the Church.

Assuming that MacKeown tried and failed to impose her will on Scarlett, the alternative was simple. Cancel the Karnataka trip. Or let some members of the family go but leave someone—MacKeown or her boyfriend—behind to stay with Scarlett. MacKeown has justified herself by saying that she left Scarlett with Julio, a 25-year-old local tourist guide who was "like a member of the family". Since when do people you have known for a few weeks become like members of the family? Just imagine the opposite. A housewife from Lajpat Nagar going to Devon and leaving her minor daughter alone with a barely known shopkeeper while she goes off to explore the Lake District. The British tabloids would have had a field day with that story.

In the Scarlett case, while the Indian press has pulled its punches, the British press has asked pointed questions about MacKeown's irresponsibility, just as it did in the Madeleine McCann case, asking how the parents, on holiday in Portugal, could go off for dinner not far from their apartment, leaving their three children alone.

Indian journalists did a fine job of exposing the ineptitude of the Goa police but failed to put tough questions to Scarlett's mother. This black-and-white, simplistic approach seems to stem from a confused attitude towards foreigners and the feeling that asking such questions condones or extenuates the crime. It doesn't. Even if MacKeown stands guilty of gross dereliction of duty, it does not diminish the magnitude of the crime. The point of asking such questions is to portray the whole picture, so that readers and viewers can make up their own minds.

When it comes to Indians, there is no such restraint or deference on the part of the Indian media, and that's good. The Times of India's excellent story on Manjunath Kalmani, the paraplegic at Delhi's Safdarjung Hospital, who had been abandoned by his parents, was a prime example. "Why haven't you visited your son?" the paper's reporter asked. The father's reply was feeble and selfish. Poor thing, he couldn't "bear" to see his son reduced to a vegetable. Never mind his responsibility as a father. Instantly, I formed an opinion of him. Just as I instantly formed an opinion about MacKeown, when I failed to hear a single word of regret at her fateful decision.

(The author writes for British newspapers from Delhi)