Out On Five Counts

Offences under sections of the IPC 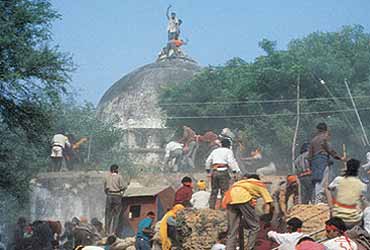 Section 153(a): Brought against anyone who does acts prejudicial to maintenance of harmony or promotes enmity between different groups "by words either spoken or written, or by signs or by visible representations or otherwise...promotes or attempts to promote, on grounds of religion, race, place of birth, residence, language, caste or community or any ground whatsoever, disharmony or feelings of enmity, hatred or ill will between different religions..."

"organises any exercise, movement or drill or other similar activity intending that the participants in such activity shall use or be trained to use criminal force or violence...against any religious, racial, language or regional groups for such activity which is likely to cause alarm or a feeling of insecurity amongst members of such religious, racial, language or regional group, caste or community". Punishment: Imprisonment up to five years and liable for fine.

Section 153(b): Imputations, assertions prejudicial to national interest by words either spoken or written or by signs or by visible representations in any place of worship or in any assembly engaged in the performance of religious worship or religious ceremonies. Punishment: Imprisonment up to five years and liable for fine.

Section 505: "Statements conducing to public mischief. Whoever makes, publishes or circulates any statement, rumour or report with intent to incite or likely to incite, any class or community of persons to commit any offence against any other class or community or whoever makes, publishes or circulates any statement or report containing rumour or alarming news with intent to create or promote...on grounds of religion, race, place of birth, language, caste or community...." Punishment: Imprisonment up to five years and liable for fine.

Section 147: Rioting. Punishment: Imprisonment for a term up to two years or fine or both.