Out Of The Sheath?

Sparks from the ashes of the Khalistan movement fly again 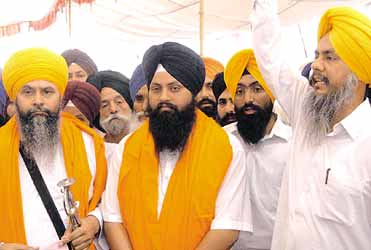 outlookindia.com
-0001-11-30T00:00:00+0553
Nineteen years to the day after Operation Bluestar, the Shiromani Gurudwara Prabandhak Committee (SGPC) supported by the Akal Takht—the supreme spiritual and temporal authority that guides Sikh affairs—has declared Jarnail Singh Bhindranwale, talisman of Punjab militancy, as a martyr and honoured his kith and kin at the Golden Temple, Amritsar, on June 6. And this wasn't one solitary symbolic function.

Eight days before, on May 29, Harjeet Singh Ghuman of the UK-based Punjab Radio distributed Rs 7.5 lakh among the families of some top Punjab terrorists for the "supreme sacrifice" made by their kin, at a discreet function at the Guru Teg Bahadur Nagar Gurudwara, Jalandhar. Among those honoured were family members of Harjinder Singh alias Jinda and Sukhdev Singh alias Sukha (who had gunned down Gen A.S. Vaidya), Dharam Singh Kastiwal of the Khalistan Liberation Force and Tejinder Singh— killed at Amritsar airport while trying to hijack an Indian Airlines plane in 1984.

If this was not enough, Dr Jagjit Singh Chohan, an ideologue of the Khalistan movement who returned to India from UK after 21 years to form the Khalsa Raj Party, declared his intention to work towards the "formation of Khalistan" at a press meet in Chandigarh. Till recently, Chohan was lying low but now sees some prospect of the Khalistan movement being revived. Also, The Spokesman, a magazine championing the Sikh cause, collected and distributed Rs 14 lakh to 132 "dharmi faujis" who had deserted the army in the wake of Operation Bluestar.

Are these developments cause for concern? Is there a serious attempt to revive the Khalistan movement? While there are apprehensions being expressed in some quarters, Punjab watchers feel the situation is far more complex than is revealed by a cursory appraisal of events. It has much to do with the compulsions of the Akalis who have traditionally used religion for their political ends. Says Prof P.S. Verma of the department of political science, Panjab University: "Now that the Akalis led by Parkash Singh Badal are out of power, they are going back to panthic politics to remain politically relevant." He feels that all the talk of Sikh identity as enunciated by the recent implementation of the Nanakshahi calendar for Sikhs (which incorporates the martyrdom of Bhindranwale) is an attempt by Akali politicians to exploit old symbols of the '80s.

All this comes at a time when the Akalis are under a relentless onslaught from Amarinder Singh's Congress government. Corruption cases against senior Akali leaders are being actively pursued by the police. Badal's own assets are under the scanner and the Shiromani Akali Dal (SAD) is preparing itself for the likely arrest of its leader. According to party insiders, the unity forged recently between the Akali factions led by Badal and Gurcharan Singh Tohra is also an attempt to put up a joint front against the state government's campaign. "If in the present scenario, there is a consolidation of panthic forces as a result of some discreet prodding by the Akalis, it could provide Badal with a shield of sorts," says Prof Verma.

Badal has indeed been very discreet. Apart from the public release of the Nanakshahi calendar at a political conference, he has maintained a distance from the activities of former Khalistanis. Since SAD is an NDA ally, the Akali leader, not wishing to hurt BJP 'sentiments', was very circumspect at the function which honoured Bhindranwale as a martyr. "This function has put an end to the controversy over whether Sant Bhindranwale is dead or alive," was all that he had to say. The BJP had already disassociated itself from the event, saying: "The party does not endorse the SGPC action."

But can the Akalis merely stoke the Khalistan spirit for political leverage without the whole thing snowballing? Observers say mass consciousness for a separate Sikh state does not exist anymore.And in terrorism-weary Punjab, the slogan of Panth vs State may not have the same resonance as it did in the '80s. People enjoying the fruits of peace may be naturally wary of a return to violence.

So far, the Punjab government has ignored these developments although cops say they are keeping tabs on former militants. Right now, the police assessment is that the public response to the revivalists has been no more than lukewarm.

The Sins Of Patricide