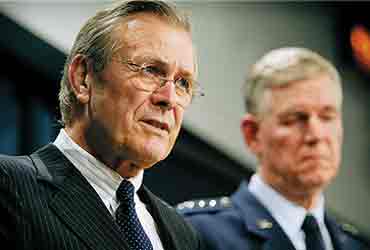 outlookindia.com
-0001-11-30T00:00:00+05:53
In the race to Baghdad, the world's most high-tech military is facing old-style, low-tech resistance. Guerrilla tactics, rearguard action and ambushes by Iraqi militias have thrown nasty surprises, harassed supply lines and slowed the advance of US and British troops in this war of "liberation". Lightly armed irregular units spread among civilians—"fidayeen Saddam"—have already brought back nightmare visions from Northern Ireland for the British. The cities of Basra and Umm Qasr, declared "secure" by the Pentagon on the third day of attacks, were bubbling with Iraqi forces launching attacks even after eight days. Pictures of frightened American pows on television didn't help nor did the Iraqi campaign to highlight civilian casualties. Ten days into the war, optimistic scenarios about widespread desertions, inspired coups, timely rebellions in a restive population and a swift resolution seem misplaced—the aura of invincibility tarnished somewhat.

It was as if the war suddenly became real. Iraqi resistance was "fierce" and unconventional—false surrender flags, shootouts at hospitals, soldiers in civvies. All of which seemed to shock the Pentagon which had banked on mass surrenders instead. Earlier this year US vice-president Dick Cheney had said: "I think things have gotten so bad there, my belief is we would be treated as liberators." Richard Perle, chairman of the Defence Policy Board at the Pentagon and a key player, had predicted that Saddam Hussein "will fall like a hollowed out tree". Words that have come back to haunt the speakers as the US braces for an ugly war.

The combined US-UK might should eventually overwhelm Saddam's regime but in the minute-by-minute saturation coverage every setback is reported, every battlefield development looms large. Doubts are being raised about defence secretary Donald Rumsfeld's war plan, developed after months of internal wrangling and over ferocious objections from the generals. His war campaign is built around a lighter, swifter force, simultaneous use of air and ground assaults and an unprecedented reliance on 'Special Operations' forces sabotaging enemy capabilities.

Dubbed the "smart plan" by admirers initially, its every aspect is being questioned now—from the size of ground forces, the 'rolling' of troops before air power subdues Iraqi positions, the bypassing of populated cities to avoid time-consuming battles and the over-dependence on Special Ops to the use of Apache helicopters and Patriot anti-missile batteries.

On his part, Rumsfeld had warned at the outset that the war could last anywhere from six weeks to six months. But there was also a clear expectation that it would be wrapped up quickly before world opinion turned even more hostile and the "Arab street" burst into flames. Everyone knew this was as much a political war as a military one. "The knives are out. It's still early but clearly Rumsfeld expected the Iraqi army to fold early. He expected 'shock and awe' would convince the generals to stage a coup, lead to thousands of soldiers surrendering," says Joseph Cirincione, an Iraq expert at the Washington-based Carnegie Endowment for International Peace. "Instead, there's an extended armoured line stretching from Kuwait to Baghdad for 200 km. You are vulnerable on all your flanks," he told Outlook. "The Iraqis are fighting a clever war. The technological advantage is stripped away by guerrilla actions." Critics say Rumsfeld's fascination with high-tech weaponry is inspired by the defence industry which parades its wares convincingly, cloaking its talk with the mantra of less casualties. The defence secretary wants ground forces cut drastically to free up funding for advanced technologies.

The size of combat troops came under heavy fire because Gen Tommy Franks, chief of the coalition forces, has no spare troops to replace marines making their way to Baghdad.Although 250,000 US troops seems like a large number, Cirincione said the number of combat troops is low—one-third of those deployed in 1991's Desert Storm. That was the Powell doctrine at work—overwhelming, decisive use of force. The Rumsfeld one is for a lighter, more supple use of force.

Ralph Peters, an ex-army intelligence colonel, says his friends in the Gulf are very angry. "Rumsfeld personally and repeatedly rejected calls for the deployment of additional army divisions. For political, bureaucratic and theoretical reasons. This war was supposed to prove the diminishing relevance of ground forces. Some things don't change. The best way to shock and awe an enemy is still to kill him," he wrote scathingly. "Those who want to wage antiseptic wars for political reasons should not start wars in the first place." Rumsfeld did spar with Gen Franks on the numbers and initially insisted on no more than 60,000 troops on the assumption the Iraqi army would capitulate in a few days. Tension between them was widely reported and in one conference call the general even used "French" to make his point for more troops.

Rumsfeld's confidence derives from the success of the Afghanistan campaign. He emerged as a John Wayne type, an image he promotes. His easy style, no-nonsense manner and 'good gollies' scored high in the polls. Determined to establish civilian control over the Pentagon, he took on the generals, aided by his circle of ideological deputies—Paul Wolfowitz, Douglas Feith and Richard Perle, a.k.a 'The Prince of Darkness'. The civilian bosses reportedly ignored some of the advice from the CIA and the Defence Intelligence Agency and listened instead to assessments from the Iraqi opposition and Israeli sources who predicted quick uprisings.

"Civilian control is fine. It is only when the secretary of defence is wrong that problems arise. There is a lot of resentment in the senior military ranks," says Cirincione. And the worst may not have come yet. Reports that 3,000 chemical suits and atropin injections were found in a Nasiriyah hospital used by Iraqi forces were sobering. Pentagon officials have repeatedly warned about the "red line" around Baghdad, crossing of which may result in the use of the dreaded weapons. If that happens, the war of liberation may quickly turn into a national nightmare.