Out Of His Labyrinth

It's still early days for a balancesheet, but for the US, the General seems to be the winner 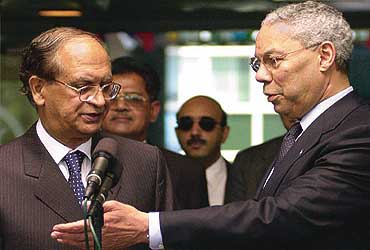 outlookindia.com
-0001-11-30T00:00:00+0553
Every summit has its major or minor surprises. The one big surprise of the Agra summit for those in Washington was that even as the Indian and Pakistani media proclaimed it to be a dismal flop—and officials on both sides harangued each other—US government officials thought the meeting between Vajpayee and General Musharraf wasn't a failure. Later they even declared it a success. Even more surprising, the same reaction, in almost identical language, came from Indian and Pakistani leaders 24 hours after the summit was perceived to have had an anti-climactic end.

Assistant secretary of state for South Asia Christina B. Rocca subsequently explained why Washington thought Agra wasn't a stalemate: "We consider the Agra summit a success because the meeting took place. Prime Minister Vajpayee and President Musharraf talked about continued dialogue. And though there was no joint statement, the fact is that three days is not a very long time to overcome 50 years of differences. And the fact that Vajpayee has accepted the invitation to go to Islamabad, that the foreign ministers plan to meet at some point soon, that Prime Minister Vajpayee and President Musharraf will meet on the margins of the UN General Assembly in September, these are all signs that perhaps there will be a process put in place. And we think that the differences between the countries will be better resolved through dialogue."

It's an open secret that Washington had supported the idea of the summit, arguing persistently against two nuclear states snarling at each other. What the Americans were—and are—afraid of is that Indian patience would snap at cross-border terrorism and that New Delhi might exercise the right of hot pursuit, consequently leading to a conventional or even nuclear confrontation. No wonder the Agra summit, despite its hiccups, has been perceived here as the first tentative step towards ushering in peace and stability in the region.

It's early days yet to prepare a balancesheet of gains and losses accruing from the Agra summit—but Gen Musharraf seems to have benefited individually. Before the summit, state department spokesmen persisted in calling him Gen Musharraf, refusing to recognise him as president. Post-Agra, for the department he is now "President Musharraf". The US has a stake in this president's success, whom it views as a secular leader whose successors may turn out to be religious fanatics. It is also anxious to ease the Indo-Pakistan tensions in Islamabad's own interest. Asked why the US does not recognise Pakistan as a state sponsor of terrorism, Harry Thomas, South Asia director in the National Security Council, said it was neither in New Delhi's interest nor, obviously, in Islamabad's for nuclear-armed Pakistan to become "a failed state—another Afghanistan". Indeed, as long as the two countries keep talking, the US goal of ensuring peace in the subcontinent is served.

Obviously, Washington's ambiguity over Pakistan-backed terrorism, and of those in think-tanks who say casually that the British considered Gandhi to be a terrorist and that one man's terrorist is another man's freedom fighter, is deeply disturbing for India. It's an approach in sharp contrast to the support it has provided prime minister Ariel Sharon against the Palestinians.

Stephen Cohen of the Brookings Institution, who earlier gave an 80 per cent chance for the Agra summit to succeed, was very pessimistic after the talks broke down. But, after hearing the measured assessments of Abdul Sattar and Jaswant Singh on TV, he came to the conclusion that "Kashmir is very complicated.These things take time, maybe a generation, before they can get to the core issues and agree on some language that would be acceptable to both. They then can go into other issues (economic cooperation or easing of travel)."

Teresita Schaffer, who holds the chair for South Asia at the Centre for Strategic and International Studies, believes that the talks failed because the leaders were not adequately prepared. Says she: "Summits are prepared weeks in advance, leaving only a few key issues to be settled by the principals. I hope the next meeting between Musharraf and Vajpayee—whenever it takes place—will be better prepared."

The stumbling block in Agra, she feels, was the contradictory perceptions of the two leaders on what constitutes the core issue. For Musharraf, it is Kashmir; for India, it is Pakistan-backed cross-border terrorism. The question now is: can the differences over the core issue ever be reconciled? Await another summit for the answer.