The '90s liberalisation wave, new focuses help get these four industry giants into the billion-dollar club. 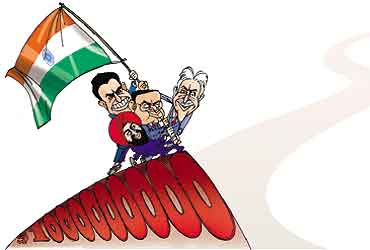 outlookindia.com
-0001-11-30T00:00:00+0553
He must have felt like Virender Sehwag, when the latter found himself opening India's batting with Sachin Tendulkar, his college idol. "We have always admired companies like Wipro and Infosys, and now we find ourselves in the same billion-dollar club with them," says Akhil Gupta, joint MD of homegrown telecom giant Bharti Televentures, which, on April 23, 2004, became the fourth company in 46 days —after Ranbaxy (March 9), Infosys (April 13) and Wipro (April 16)—to announce it had crossed the billion-dollar mark in annual turnover.

To stretch the Sehwag analogy a little, Bharti has hit its own sweet 309. Its revenues are all predominantly earned in the domestic market. For the others, the overseas market generates an overwhelming part of revenues. "Ours is a rupee billion," points out Gupta, "had we earned our revenues overseas (telecom tariffs in the US are 25-30 cents a minute compared to India's 2-2.5), our turnover would be $3-5 billion."

The overseas market, though, is still an important ingredient in its billion-dollar recipe. Wipro and Infosys, being in IT services, had to test themselves in the global market since the domestic scene accounts for only a minuscule percentage of the global business. The software firms that did not, have lost out in the hard trek to reach this corporate peak.

Mumbai-based Mastek, for instance, started life just a year after Infosys. In '92, they both earned about Rs 15 crore in revenues. However, while Infosys earned most of it from overseas, Mastek was largely confined to the domestic market. Mastek CEO Ashank Desai is on record saying the overseas networking, expertise, and export focus that Infosys had gained by that time has been crucial in propelling it beyond a billion. Mastek, as of June '03, was still only a Rs 379.39 crore company.

Ranbaxy had as early as in 1993 come out with a vision statement vowing to become a "research-based international pharmaceutical company". "With 99 per cent of the global pharma market outside India, we felt it necessary to be present in key markets," points out Malvinder Mohan Singh, president-pharmaceuticals (widely looked upon as CEO-in-waiting), Ranbaxy. Even Bharti, while having much on its plate within India, never shied away from global competition and bid and won a contract to provide services in Seychelles (better known for hosting beauty pageants) when it was just a two-circle company in India.

The international focus, apart from augmenting revenues, has other uses too. "With internationalisation, we learnt new things and became more competitive in the domestic market too," points out the 32-year-old Singh. He knows some of it first hand, and admits to quizzing father Parvinder extensively when Ranbaxy came out with the '93 vision statement.

The early '90s saw a kind of mad entrepreneurial drive that drove these companies on the path to exclusivity. The late Parvinder Singh was the one who guided Ranbaxy, a small family concern when he joined it in 1967, into basic research at a time when the rest of the Indian industry was happy ripping off international blockbuster drugs under the deceptively respectable term of reverse engineering. Azim Premji, like Singh, was another alpha male entrepreneur who transformed Wipro from an edible oils company into an IT giant. Bharti's Sunil Bharti Mittal, who began as a cycle parts manufacturer in Ludhiana, captured the telecom opportunity of the 1990s far better than the established business houses, and N.R. Narayana Murthy, who quit his job at Patni Computer Systems with six colleagues in 1981, took the risk and set up Infosys with an initial capital of $250. "Vision and effective leadership were crucial. While the companies in these sectors got the same opportunities, only a few have made it this far," says Deepak Kapoor, director, PricewaterhouseCoopers.

These leaders also created a strong second line of command. Parvinder Singh is no more. Professional manager Vivek Paul runs Wipro with Premji a somewhat distant figure. D.S. Brar, handpicked by Singh as his successor, took the CEO's chair in Ranbaxy upon Singh's death in July 1999, and co-founder Nandan Nilakeni is Infosys' head honcho while Murthy calls himself chief mentor and acts as an industry evangelist. Mittal, while still designated CEO, today concerns himself primarily with broad strategy. The department and operational heads in all the four companies are allowed a high degree of freedom within their space and act as entrepreneurs in their own right. Says Gupta: "At Bharti, we have taken this principle right down to the call centre level, where the frontline is empowered to take decisions on its own and they are judged by that."

All the four billion newbies also conform to a high degree of quality, transparency in operations. The overseas focus, the listing on domestic stock exchanges, trading in their shares overseas either through direct listing or gdrs/adrs, wouldn't let them have it any other way.

None of this would have come about had the economy not opened up in 1991. The '90s saw Wipro come into its own as an IT services major. Says cfo Suresh C. Senapaty: "We had our first corporate group vision exercise in 1993-94 when we set specific goals. It was the first $10 million revenue target that was the tough one. From then on, we knew the 100th 10 million would happen." Infosys' 1992 ipo will always remain a landmark and stories will forever be told about how it created millionaires out of ordinary folks. Ranbaxy's 1993 vision statement has already been mentioned, and Mittal could still be selling generators or telephone sets (businesses he dabbled in until he bagged the Delhi cellular licence in '95) had the government not decided to privatise telecom services. Says PwC's Kapoor: "Once India opened up, these people became more ambitious."

Finally, another common factor that binds this G-4 is their unstoppable quest. Although Nilekani admits that "our lives run quarter se quarter tak, qsqt" because of stockmarket pressures, Infosys has already chalked out a new blueprint to be the largest global software company. Malvinder Singh says the milestone gives Ranbaxy immense confidence and satisfaction since it was what they had set out to achieve in 1993, but it is already working towards Vision Garuda, announced in 2003, that has raised the target to $5 billion by 2012. Wipro was almost prosaic in announcing its billion-dollar turnover. Says Senapati: "When you look at a $600 billion global market...to be a $1 billion company is still very small...we have a long way to go to realise our ambition."

Nevertheless, the billion-dollar mark remains a significant milestone. It is a reaffirmation of their business models and has a palpable effect on the companies' global image. The last word belongs to the cricket-quoting Gupta. "It's like a century. After all, there is a bigger gap between 98 and 100 than just two runs."