‘Our People Won’t Be Hostage To The Past’

Myanmar's democracy movement leader and Nobel Laureate on India, China, democracy, Rohingyas and much else 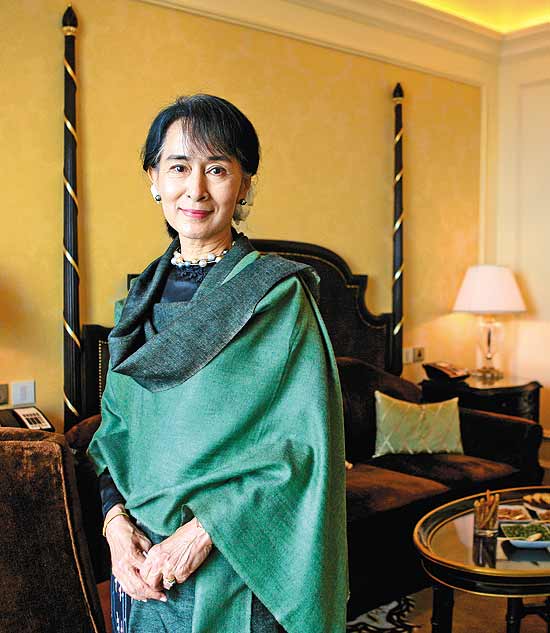 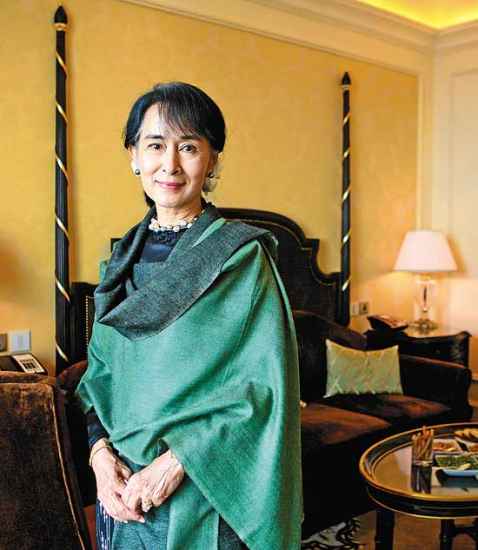 Daw Aung San Suu Kyi looks as serene and charming in person as she does in her photographs. As the champion of democracy in Myanmar—which she insists on calling by its pre-junta name, Burma—she is an iconic figure in the world. Today she holds the key in Myanmar’s tentative steps towards democracy—an experiment the ruling army generals of her country has embarked upon recently. Her release from a near two-decade-long house arrest has raised hopes both within and outside Myanmar. Much of the sanctions and isolation that Myanmar was once subjected to by the West is fast coming to an end. US President Barack Obama’s impending visit to the country says as much. But several challenges have still to be met—not only full democratisation, but also the question of ethnic nationalities. On a visit to India after 25 years, Suu Kyi has had a packed programme—delivering the Nehru Memorial Lecture, meeting senior politicians, opinion-makers and old friends. In between, she managed to squeeze in some time to talk to Pranay Sharma. An excerpt from the interview:

You said that you were a little sad that India was not more vocal in its support during your detention, but looking back, don’t you think India’s ‘quiet diplomacy’ was more effective in convincing the army rulers to open up and embark on the road to democracy than those who clamoured for sanctions and thus led to Myanmar’s further isolation?

I don’t think I could say that. Everybody did whatever they could. I think we will have to give full credit to all those who supported us very, very vigorously and very, very openly.

What about India? How do you see the way it played its role?

"We are not a democracy; we’ve just started the process. Once we have made progress, India and Burma will get close."

Politically what should India be doing? It is a democracy; it has good equations with the generals and with you. What kind of a role do you see for India?

It’s not just India, but anybody who wants to see genuine democracy in Burma. First of all, they will have to develop an awareness of what is going on in the country. What is the pace of this democratisation? What about the constitution, which is not a particularly democratic one?

After the kind of interactions that you have had since your arrival, what are you taking back?

I have just arrived; I spent yesterday with my friends. They were old friends and we were not talking politics; of course, politics does come in, mainly because my life is politics now. But the impression that I have received so far is how warm Indians are towards me and I appreciate that very much. I believe that people-to-people relations count much more than government-to-government relations.

What about China? It is the other big player in the region and has a very strong presence in Myanmar. What kind of advice do you think it will give to the generals? What role do you expect it to play?

I don’t know what they talk about and I would not like to speculate. But I am confident that we will be able to maintain very good relations with China even as a democracy, for we have done that in the past, when Burma was a working democracy and China was an established Communist government. We still had good relations. So I do not see why we will not be able to do this.

"I am confident we’ll have good ties with China even as a democracy, as we’ve had that in the past when we were a democracy."

And it can continue to give sage advice to the generals to stay on course on democracy?

I would not have thought that China would give the generals advice on democratisation but I would not like to think about our military as anything but the military of our country. And that they would be open to suggestions and good advice from all friends and neighbours and take the best that is suitable for our country.

You were seen as the rallying point, an icon for absolute democracy. But now some of your detractors tend to describe you as the ‘poster girl’ of the armed forces. How do you react to such criticism?

Well, I am a little surprised, because I have always said I have great affection for the army which, after all, my father founded. If they are criticising me now for talking fondly about the army—though I don’t like what they do or what they have done in the past—I still am fond of the army. If they have woken up to the fact, it means that they have not been listening to what I have been saying for the last twenty or so years. I am well aware that you cannot go into politics without opening yourself up for criticism. It is just part of life.

What should be the legitimate role of the army in Myanmar?

The legitimate role of any army would be to defend the people and the constitution that is voluntarily accepted by the people.

No part for them in politics?

"I have great affection for the army which, after all, my father founded—but I don’t like what they do, or what they’ve done in the past."

Does a general turn into a civilian leader just by shedding his uniform? Or is there something more to it?

It is a question of mindset, isn’t it? Shedding the uniform doesn’t obviously mean shedding your mindset. I think the great majority finds it difficult to change that mindset. Not just generals, but human beings in general cannot change the mindset within which they have operated for decades. Only an exceptional few are capable of doing that quickly enough.

How easy will it be for the army to go back to the barracks?

I think it depends on the perception that the army has first of themselves and then what democratisation means. I always believe humans are open to reason. Not perhaps quite easily, but they are. I do believe there are people in the army who generally love the country.

The army has been responsible for many massacres. When Myanmar becomes fully democratic, will those responsible be tried?

I know this is something people keep talking about. But I always quote Desmond Tutu, who talks about restorative  justice and not retributive justice. We have to think of the future; we’ll have to think of the greater good beyond such things as retribution. It is an answer we must find together. It is not for me alone to say how this should be conducted, as in the end it will be the people who will decide how they want things to go. I do think that our people will be capable of looking at the greater future and greater picture than to be completely hostage to the past.

"About the Rohingyas, we’ve to look at citizenship laws, then have to examine their charge that such laws are not acceptable."

Myanmar has some of the longest-standing insurgencies in the world. What will be your approach to bring an end to the ethnic unrest?

First of all, we will have to recognise the aspirations of the ethnic nationalities. If we go beyond material development—I think the perception is that if you provide enough development they will be satisfied. It is not like that. They have their sense of identity and traditions and aspirations. These must be recognised. The important thing is to look for a political settlement. This again comes back to the constitution. The constitution, as it is, is not going to satisfy the aspirations of the ethnic nationalities.

What about the Rohingyas? Are they entitled to full citizenship in Myanmar and enjoy privileges and benefits like all others?

There are such things as citizenship laws in every country. And what we will have to find out is what kind of citizenship policy this government is adopting. People talk about these laws as if they can be chopped and changed at will. Well, it doesn’t work like that. I have said repeatedly that it has to be looked at in two stages. The first stage is to see what the present citizenship laws are and who are entitled to citizenship under those; that’s the first step. They are now saying that the laws are not acceptable—then that is something that has to be looked into. We will have to see how it can be made acceptable, what is it that is not acceptable, so that’s the second stage. All countries operate within existing laws.

President Obama’s visit to Myanmar is being widely seen as the US’s endorsement of the present regime in Myanmar. Would you say it is a little premature to say that, or was it long overdue?

It is certainly not long overdue, nor is it premature. The US has been a good friend to the movement for democracy in Burma. Whatever they are doing they are doing with the intention of promoting democracy, rather than endorsing any particular regime.

What do you do to deal with these long spells of detention? How do you keep yourself together, what do you tell yourself?

But do you have to try to stay very optimistic?

I don’t know if optimistic is the word, I think you have to be very committed.

To what you believe in?

Yes, to what you believe in. I made a choice with my eyes open. I was under no illusion that it was going to be a bed of roses. So I put my commitment first.

Radio used to be your only link with the outside world during your detention. But now that you are out in the open and find other options like the internet, TV, mobile phones etc, does radio still have the special place?

Yes, I think it is special. Because the thing about the radio is that you listen very carefully. And years of listening to the radio has been a good training for me. You learn to recognise nuances that otherwise you wouldn’t.

Would you recommend that to the younger generation?

I think so. Listening is a very good thing. I have found that very few people really listen.