Our Only Colonial Thinker 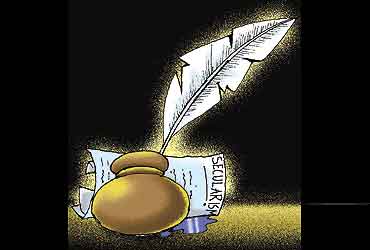 The essay by Ashis Nandy, A Billion Gandhis (June 21), demonstrates once more that this celebrated Indian psychologist and maverick thinker is exactly as dazzlingly clever as he is tiresomely repetitive and profoundly ill-informed. And he is as innocent of the facts about India and her past as he is of Europe and hers. Armed with this blissful innocence, he can then brilliantly develop paradox after paradox. The fact that none of them has any basis in reality has rarely fazed him. So let us begin with his view of the history of concepts. Nandy claims that "the concept of secularism emerged in a Europe torn by inter-religious strife, warfare and pogroms". When and where did this happen? In the France of Charles IX and Henri IV? During the Thirty Years' War? Can he give us some specific periods and societies? No. Because Nandy's Europe does not exist except in his own imagination. It is a non-place that only exists to be an 'anti-India' and he believes he can attribute anything he wants to it just because it tickles his fancy.

In point of fact, the term 'secularism' has very little purchase in most European or indeed other western societies as a part of normal political vocabulary. Even today, no one in the political sphere much talks about 'secularism' in the United Kingdom, Germany, Italy, France, Spain or Portugal or in the United States, Argentina, or Brazil. Neither Tony Blair nor Mrs Thatcher has ever used the word in a speech that I can remember. The only Europeans who use some sort of term like that are the French, with their idea of laïcité. But the French did not mean this term to be one that mediated between religious groups. Rather, it had to do with separating the state from one particular religion, Catholicism, in the French Revolution and its aftermath, leading up to the well-known Separation Act of 1905. This is not quite the same thing as 'secularism'. Europeans do talk of 'secularisation', but this simply means the turning away from religion, the fact that churches are less and less attended and so on. The idea of 'secularism' propagated in nineteenth-century Britain by George Holyoake and then Charles Bradlaugh (who founded the National Secular Society in 1866) was for the most part one linked to promoting rationalism in education rather than education through religious schools.

It is therefore a profound error to assume that 'secularism' is a common word in political use in the West that has simply been transferred to India as an 'imported idea'. In reality, the term has a political weight in India that it has never had in the West, and it has acquired a deep meaning and significance in India that many Europeans simply don't understand. Thus, 'secularism' has become almost as Indian a word as 'preponed' or 'denting' (for removing a dent in a car).

This said, one can only applaud Nandy on one point: when he suggests that one should look to traditions and political concepts that have long existed in India for notions of tolerance. But one equally wishes he practiced what he preached. What is Nandy's own record on this matter over the years? He has never deigned to study Indian history. He has no idea what took place or what people thought or wrote in India before colonial rule. When pressed, he refers to the Ramayana and the Mahabharata as if this were the sum total of India's past. His own knowledge of colonial history is essentially limited to the British themselves and Bengali authors living under colonial rule. What sort of intellectual resources are these, if not those of "the dominant, colonial culture of India's knowledge industry"? Not only has Nandy never read a single work from the fifteenth or sixteenth century, he does not even read those who write about these texts. Truly, to be a 'great thinker', one must first be a great innocent, one who can blithely claim—as Nandy does—that India never had historians before colonial rule. Apparently Abu'l Fazl came from Mars.

Nandy appears at his worst when he wishes pompously to hand out lessons. He wants others to learn from "the concept of convivencia that apparently existed in medieval Islamic Spain. Did anybody in Islamic Spain ever use this "concept"? So far as I know—and I have studied the history of Spain in that period unlike him—no one did. This idea was imposed on the Spain of that period by romantic modern historians, and it is no more indigenous to it than 'secularism' is to Mughal India. And the idea that Spain in this epoch was "the only truly plural polity Europe has produced in the last one thousand years" is simply another example of what passes for scholarship in some circles. It is just another case of the Golden Age syndrome.

So perhaps Nandy should begin by reflecting on the rather widespread of forms of "obscene arrogance", and not hand out lessons before doing his homework. If he does so, I am sure he will find plenty of examples of tolerance not just in the villages that his rather tired populist rhetoric wants to hold up as an example, but in other parts of Indian society in both the past and present. But it may involve harder work than producing the cotton candy that passes for cleverness in 'indigenist' circles.

And it may also involve the sad admission that in his romantic adulation of India's Hindu past, his desire to preserve indigenous 'purity', his mythification of an ahistorical Europe, and his links to the lachrymose tradition of the romantic underside of the so-called Bengal Renaissance, Ashis Nandy is today our only true colonial thinker—now that Nirad Chaudhuri has passed on. He may be a colonial romantic, but that does not make him any less colonial in his mentality.

Sanjay Subrahmanyam is Professor of Indian History and Culture at Oxford University, and author of Mughals and Franks and From the Tagus to Ganges, both to appear with OUP in 2004