Our PM put all protocol aside and visited Pakistan, he took initiative to normalise relations, but our neighbour don't mend their ways, Home Minister Rajnath Singh tells Outlook. 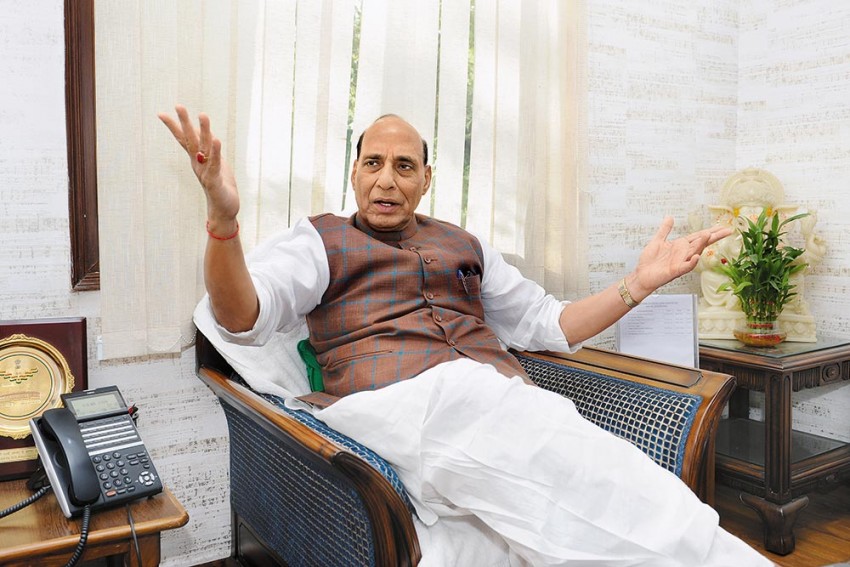 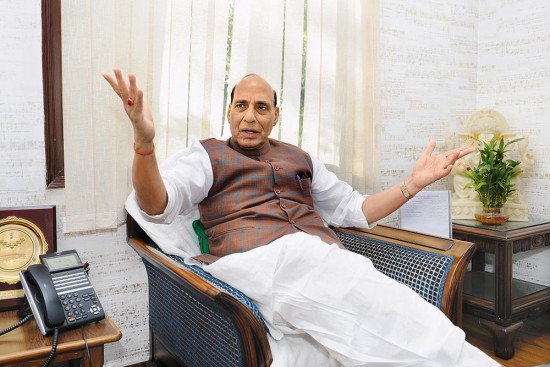 Home Minister Rajnath Singh tells Bhavna Vij-Aurora that the Centre made all attempts to reach out to Kashmiris and bring peace to the state, but some vested interests did not let them succeed. He says the government is not going to let the setback come in the way of peace and is determined to resolve the Kashmir imbroglio. With Pakistan sponsoring terrorism in Jammu and Kashmir, Singh says it’s high time the neighbour mended its ways.

How do you read the recent developments in Kashmir?

The central government has been trying its best to improve the situation in the state. We declared suspension of ope­rations by security forces during Ramzan. Our belief was Kashmir is ours and so are the Kashmiris. We did not want them to face any inconvenience in the ‘muqaddas’ month of Ramzan. But what was the response from the other side? Our army jawaan Aurangzeb was killed. Reputed journalist Shujaat Bukhari, who talked of peace, was shot dead. We couldn’t even think of extending the ceasefire and told the security forces to continue operations. Politi­cally too, we had no option but to pull out of the government.

Can we expect resumption of aggressive operations by security forces?

Aggressive is perhaps not the right term, but, yes, we will do all that is needed to be done. Terrorism is a big challenge. Our neighbour Pakistan is sponsoring it. The people of the state had welcomed the suspension of operations, but there are obviously some elements who do not want peace and prosperity in the state. They vitiated the atmosphere. These are some who claim to be leaders, but they are cheating the people.

You say that the Centre did a lot for Kashmir. Can you please elaborate?

The prime minister visited the state last month after suspension of operations was announced. I had a hugely successful programme at the S.K. Indoor Stadium in Srinagar. There were 5,000 sportspersons and everyone stood for the national anthem. I was very optimistic after the visit. I had gone to Anantnag last year and met personnel of the state police and the CRPF. We also sent Dineshwar Sharma (former Intelligence Bureau chief) as interlocutor and he was open to talking to all right-minded people interested in finding a solution to the problem. For the first time, we have also achieved a very good coordination among all the security forces. The army, the Central Armed Police Forces and the J&K Police are working in good coo­rdination. There is good coordination with the IB too.

What about talks with Pakistan? J&K’s future seems to be linked with India’s relations with the neighbour.

There is no doubt that Pakistan is sponsoring terrorism in Kashmir. We want good relations with all our neighbours, including Pakistan. That is why PM Modi invited heads of all neighbouring states for his oath-taking ceremony. He also put all protocol aside and visited Pakistan. He took the initiative to normalise relations. We have made several overtures to its leadership. I also went to Pakistan and raised the issue of terrorism. But they don’t mend their ways.

“The people of J&K had ­welcomed the ­suspension of ­operations, but some elements don’t want peace and prosperity in the state.”

Sometimes, the Pakistan leadership claims they want to stop terrorism but are unable to. We have told them that we will cooperate and help them. They have to show some initiative. Even the killing of Bukhari seems to be the handiwork of Pakistan-sponsored terrorists. We have continuously tried to improve relations.

What are the chances of talks with Pakistan before the Lok Sabha ­election next year?

We are ready to talk, but the least they can give is an assurance that they will not allow training and export of ter­rorists from their country. The DGMO (Director General of Military Ope­rations)-level talks happened last month and they decided to fully implement the 2003 ceasefire pact, but again there were violations. It is difficult to trust Pakistan.

At Rising Kashmir, The Afterglow