Our Lady Of The Rosaries 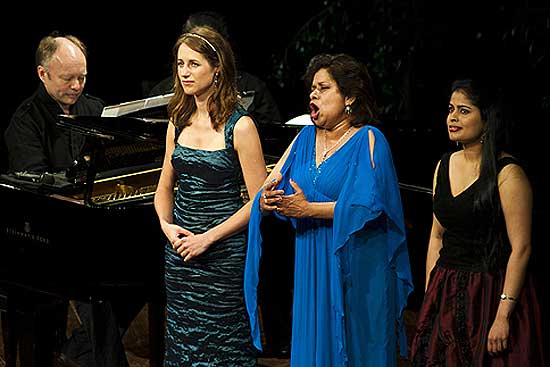 There’s something profoundly haunting about the evocative deep accent of mezzo-sopranos. In Patricia Rozario, whose stellar rise since her first appearance on stage in an annual parent-organised talent contest in Santacruz, Mumbai, that brought her to perform with today’s world-leading composers on the best scenes in the world, you will find a sweet and endearing down-to-earth generosity. Her opera repertoire incl­udes many of the baroque masterpieces and the contemporary compositions. Her recordings of both ancient and avant-garde music have taken her to the top of her field in Britain, making her the muse of many renowned composers like Arvo Part and Sir John Tavener. And more recently, she bec­ame the second Indian after Zubin Mehta to receive a fellowship from the prestigious Royal College of Music in London. But when she meets you over a cup of coffee, taking a break from the frenzied rehear­sal session she has to put herself through, she’s all warm indul­gence and attention. When we ask her if opera is set to arrive in India, she sounds hopeful. “There’s so much talent here, it’s just a matter of time before it becomes the next big thing. ”

Well, Patricia just finished her four-city tour of India, staging concerts in Pune, Mumbai and Goa, before the grand finale in Delhi. The auditorium in Delhi, however, was painfully desolate despite the top-class act offered by a clutch of talented Indian performers that was led by the fiery soprano and her pianist husband Mark Troop. Their performance in Dido and Aeneas, written by the English composer Henry Purcell, recounts the love of Dido, the queen of Carthage, for the Trojan hero Aeneas. There’s a crackling show by the troupe when the elegant queen sings her last aria, “When I am laid in Earth”. The opera concludes when Dido dies in a disillusioned agony, after she had ordered the “cupids to scatter roses on her tomb, soft and gentle as her heart.” Patricia’s ‘voice of liquid gold’ lends the final touch to the poignant drama.

The love affair with opera, however, is not new. It goes back to Patricia’s early Bombay evenings, filled with piano, guitar and classical music records.  “My four brothers and I were taught to play the piano by my mother and she also encouraged us to sing solos and group songs. At every gathering, we were asked to sing and play for the guests,” she reminisces. Later, she went to London as a student, intending to ret­urn to India after the completion of her studies. But the rapid deve­lopment of her voice took everyone by surprise; this unanticipated impr­ovement changed the course of her fate. After being awarded many different scholarships in addi­tion to recei­ving the prestigious Gold Medal at the Guildhall School of Music and Drama, Patricia’s career quickly took off. Tavener first heard her sing when she auditioned for his opera Mary of Egypt, while composers like Pärt, Simon Holt, Param Vir and Roxanna Panufnik wrote for her.

Patricia might already have a past full of glory that would turn most artists into narcissistic divas, but that doesn’t mean she is snobbing her roots. On the contrary, Patricia’s connection to India has remained unbroken; she performs often in saris, she adapted Indian folk songs for a City of London Festival and she comes to India thrice-a-year to teach students and hold concerts.

Yet, in spite of her successful and multifaceted career, Patricia feels the learning curve never ceases. “There are new languages to be learnt, new operas to be conducted, new songs to be sung.” And what’s next? May we suggest a warm ensemble with Zubin?

So Who’s Inside The Sanctum Sanctorum?