The English county is about blending in. But some Indian stars seem too hung up. 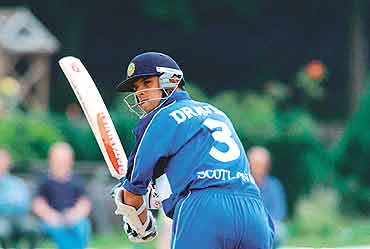 outlookindia.com
-0001-11-30T00:00:00+0553
Brad Hodge is the Quiet Australian. He ambled over to the crease in Leicestershire's game against Yorkshire in the Twenty 20 county championships, and in a match with no more than 20 overs a side, scored 97. And when Yorkshire came on to bat, he got three wickets. Leicestershire won. There was much back-thumping, beer at the pub located helpfully next door to the pavilion, and Hodge picked up the champagne for man of the match. Game won, he threw his kit into the boot and drove home, like the other county players. Like the way county games are usually played.

Unlike Virender Sehwag, now the new Veeru of Leicester whose batting was to have produced so much sholay. Sehwag didn't score, he almost never has all season here. But Sehwag has two stewards to escort him through an excited group of 50-60 autograph-seekers, to a car paid for by Leicestershire county, so he could drive to his home, provided of course by the county. That, and a fee of £80,000 for the season makes Leicester comfortable for Sehwag, and Sehwag a rather costly import for the county.

Sehwag's run record here has been embarrassing, but even that does not give the full picture. The few runs he's assembled have been airy, streaky things that never looked like adding up to much, even in the face of demons no more menacing than the regulation county bowler. Few runs from Sehwag has meant only a few Indians at the Grace Road ground matches. And that's hurting Leicestershire. "We were hoping there would be many more," said a Leicester official in a white coat at the pavilion entrance. "I think they like to go for just the big game."

The Foxes, as Leicestershire county cricketers are called, have been trying for a while to dig themselves out of a financial hole. They need to sell more tickets at the ground. Of about 4,000 club members, more than half never come to watch a single match in a season. Poor Grace Road doesn't even have stands for spectators on all sides of the ground. It is rarely full in the part that could be. And this in a city where white English people are set to become a minority in a few years in the face of a surging immigrant population, most of it Indian. Grace Road needs the latter's money, and Sehwag was to be the magnet after Anil Kumble and Javagal Srinath had failed in seasons past.

In a small city with about 80,000 Indians, Sehwag's fame was expected to pull in at least a thousand. And at 10 pounds a ticket for a match, he was supposed to more or less pay for himself—and more— over a season. At least some hoped that this would then enthuse more Indians to play for the Foxes. The Guardian wrote that with Sehwag in the team, the county "stands on the threshold of an Indian revolution that has the potential to change the face of Leicestershire cricket forever". The paper will no doubt now bail itself out saying it only said "threshold" and "potential".

The handful of Indians who turn up though are still rather fond of Sehwag. He has a tweak-the-cheek charm, of a slightly overfed kid who suddenly grew up. Some Gujarati mums love him. "I came all the way from London to see him score some runs," said one. "He did not get runs but at least I saw him."

And this at least is not a peculiarly Sehwag problem. If Leicestershire had won, it was despite a lot of fluent and at one time seemingly unstoppable flow of runs from Yuvraj batting for Yorkshire. That made Yuvraj a legitimate hero for the day. The trouble was, he acted like one. Other county players appear on the pavilion balcony, Yuvraj made his a balcony appearance.Others were visible, he was beholdable. On one of these appearances, he began to throw little knick-knacks and souvenirs into the crowd. They were grabbed by eager young hands. As thrown by Yuvraj himself. Later, he came down among the fans, stroking some teenage hair on the way (because it is there). Come, not even Tendulkar, who so much could, has ever done this sort of thing. And Yuvraj has not even played a Test match yet.

Maybe this is the acceptable face of stardom, but it wasn't going down very well at Grace Road. "I can't remember the last time I saw anything like this," said an old-timer, whose hat would tell you if he didn't that he has hardly missed a game at the ground since 1956.

That Yuvraj was here as a foreigner was incidental. What was embarrassing was a style that is foreign to the spirit of county cricket. These games are laidback summer events with a substantially old-England following. An ice-cream van parks outside the boundary ropes with a chance of collecting a six some time. Between innings, a couple of hundred come playing and picnicking on the field. Then a chap rings a gong to tell the players to come out, and for everyone to empty the field. If you don't like the benches, you can bring your own chair. There isn't a policeman visible on the grounds. Players wander around, you get passionate about your county for a few hours, then everyone goes home. Not a place to appear Pope-like on a balcony.

Someone here should have learnt from the new darling of Derbyshire how not to play star. Or from Rahul Dravid. Because county cricket is going remarkably well for Mohammad Kaif playing for Derbyshire just north of Leicester, and for Dravid playing for Scotland all the way up north. "I played a couple of games for Leicestershire last season," Kaif told Outlook. "I enjoyed the competition, and I thought it would be good if I can play a season."

Up in Derby, Kaif is working real hard. "It's not easy for a batsman in these matches," he says. "The pitches, the damp, the conditions, you know all that." Kaif plays five days a week, and goes for long workouts at the gym to keep fit for the tough season. He has remarkable support from captain and England player Dominic Cork, and from coach Adrian Pearson. "He is such a great guy," says Pearson. "It's great to have him here."

The name of the game that Kaif has won so well is the County Blend. He is the player with the rest, not playing at being the star above them. "We just have good fun practising, playing, and after a match we all go out and have some fun. I have so much to ask about cricket here, and they want to know so much about how cricket and competitions are played in India." The County Blend is a challenge to all overseas players, and the enduring memories they leave are usually about how they played this game; that they will move scoreboards is taken for granted.

Kaif too isn't short of a fan following. He is besieged wherever he goes, inundated with interview requests. And, dare we say it, he's particularly a darling of the Indian Muslims of Leicestershire. "Kaif, aaj zara khel lena, bhai," an elderly Gujarati Muslim said as he went out to bat against Leicestershire. And play he did, with a fast 54. Pity Derby lost the match on the last ball by one run.

Now no Indian cricketer has brought as correct a technique to the County Blend as Rahul Dravid, playing this year only a little cricket for Scotland, which will always rank in the counties as the unexpected also-playeds. That makes a change from Dravid's busy season with Kent in 2000. When complaints were being made against Ganguly (then playing for Lancashire), Dravid was held up as an example of the way to play the game in the correct spirit with the rest of the lads.Nothing he's done in Scotland at the other end of the country has changed any of that.

Dravid has been playing well for Scotland, and doing fine with the Scots, despite his run of luck with certain lbw decisions and unexpected visitors in the dressing room. The trouble with a man who plays the game this correctly on and off the field is there isn't very much to say about him, because his style by definition precludes any sudden eruption of angularities. That he is around on the highlands and islands of Scotland on a honeymoon with his lovely bride is another matter. He wanted to keep that part of his season private. The last thing a man wants on his honeymoon is the questions and cameras of strangers. Outlook decided not to make the leap from press to paparazzi