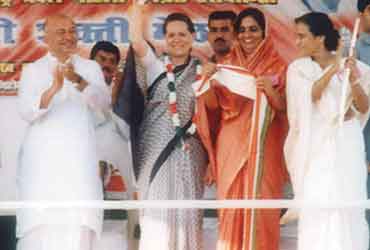 The Congress president wrung tears from the women of Rajasthan by casting herself in the role of the beleaguered widow cruelly lampooned by wily political rivals. But her emotional public response to BJP and Nationalist Congress Party (NCP) leaders' caricature of her as an "import" has served only to underline the irony that she remains both the Congress' chief strength, and its Achilles heel. Or so party leaders fear and admit in private.

It is the first time in four years that Sonia has directly responded to provocative remarks on her foreign origin. This, according to party sources, she did on the advice of her scions-in-perpetual-waiting, Rahul and Priyanka, who felt it was time their mother went on the offensive. After all, every time she's turned aggressive, whether after the 1999 Congress-Sharad Pawar split or during the vote of confidence motion in the monsoon session of Parliament, it has paid dividends. By all accounts, the response of the crowd in Jaipur, particularly women, was encouraging. "The sheer emotional punch of the Congress president saying it was tremendous. That could not have been duplicated by anyone else," said party spokesman Anand Sharma. A chorus of righteous indignation from others in the party followed—letters by six senior Congress leaders and press statements by the two Reddys (S. Jaipal and T. Subbirami) pointing out that Sonia was a citizen within the meaning of the Indian Constitution.