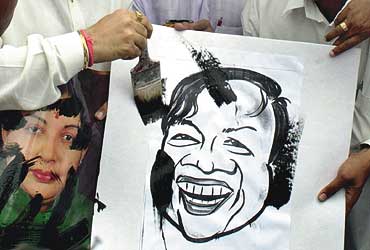 outlookindia.com
-0001-11-30T00:00:00+0553
There was a time when Jayalalitha Jayaram's press conferences in the capital were popular draws. Those were the days when she held the fortunes of the Vajpayee government in her hands. So when media organisations got the Tamil Nadu government's invite last fortnight for a press conference on the sharing of the Cauvery waters, attendance was lukewarm. References to the water dispute were taken without too much excitement. Until, without warning, the dowager asked the press corps if they'd be interested in her views on the foreign origins of Congress president Sonia Gandhi.

In a matter of minutes, the scenario altered dramatically at Delhi's Maurya Sheraton hotel. As reporters began to scribble frantically and TV cameras zoomed in, Amma's eloquence would have warmed the cockles of the beleaguered bjp leadership. "Let us not allow India to fall into the clutches of Antonia Maino alias Sonia Gandhi and her rapacious relatives and Italian friends," she thundered. What followed was an avalanche of criticism aimed at the Congress president and her Italian origins. "It will be a sad day for India should she become PM."

The statement stunned the political class. An issue thought long to be buried—through rulings made by the Supreme Court and detailed statements by various Shankaracharyas—seemed to be coming out of the closet with uncertain force. Sonia's instant reaction, say 10 Janpath insiders, was to play down the attack. Says a party leader: "She didn't take anyone's advice. Her immediate response was, 'Just ignore it. Otherwise, we'll play into her (Jayalalitha's) hands'." Accordingly, party spokesperson Abhishek Singhvi briefed the press, saying, "The Congress won't stoop to the level Jayalalitha has."

Congress leaders, however, saw this as a chance to showcase their loyalty—if any still needed to be shown—to 10 Janpath. Chhattisgarh CM Ajit Jogi, while addressing an sc/st conference in Delhi, got all the delegates to raise their hands if they supported Sonia as PM. All Congress CMs attacked Jayalalitha's statement, with Sheila Dixit saying that the Tamil Nadu CM now wanted to be PM.

The onslaught didn't end though. The next day Jayalalitha returned to Chennai and addressed the press there, referring repeatedly to Sonia as Antonia Maino.

The Congress machinery went into over-drive. cwc member Priyaranjan Das Munshi claimed Jayalalitha was doing this at deputy PM L.K. Advani's behest. "Advaniji is responsible for this," he thundered. The conspiracy theorists in the Congress had the entire scenario charted out. They claimed that Jayalalitha needed the Centre's "help" in her court cases. Congressmen claim Amma drove straight to North Block after she finished her tirade at the Maurya.

Home ministry officials deny that the issue was discussed. With Jayalalitha's appeal against the Madras High Court judgement in the tansi case currently being heard in the Supreme Court, aiadmk cadres claim there is little the bjp can do to help Jayalalitha at this point. When asked, Amma countered: "Why should I plead with the bjp to win the case? How will that help?"

Her aides insist that Jayalalitha's public criticism of Sonia has nothing to do with something as "narrow" as her court cases. What is of concern to the Tamil Nadu CM, they say, is the likely posturing for the PM's post after the 2004 general elections. The aiadmk propaganda secretary O.S. Manian told Outlook, "If there is someone in India today who is best qualified to be PM, it is our Amma. She can speak English, Tamil, Kannada, Telugu, Hindi...she can communicate to the people of every state in India." Adds an aiadmk MP, "We have seen Amma as CM. Now we will see Amma as PM." Some observers pointed out, "You could also interpret Jayalalitha's pronouncements as a message to the Supreme Court judges: 'You are dealing with someone who could be the future prime minister'."

Jayalalitha herself spoke of the formation of an alternative non-Congress, non-bjp Third Front. Hinting that she would not be averse to leading it, she asked for a meeting of "all Opposition leaders to decide on a consensus candidate after addressing the vital issue of preventing a foreigner from ruling the country".

Some analysts see Jayalalitha's outbursts as the result of local pressures rather than a concern for what happens at the national level. Just last week, dmk chief K. Karunanidhi announced that it was time for the older generation to step down. Says Congress MP Mani Shankar Aiyer, "The minute he announced this, a war of succession broke out between his elder son Azhagiri and his sibling Stalin. A split in the dmk is inevitable." While Aiyer claims that the split "virtually coincides with the rise of the Congress", this is not necessarily the true picture. The tmc-Congress merger is still to take off, with a splinter group of five tmc mlas still resisting the Congress. More importantly, the Congress is still to emerge as a dominant factor in Tamil Nadu politics.

Given this, Jayalalitha knows she faces virtually no opposition in the state. With as many as 40 seats at stake (39 in Tamil Nadu and one in Pondicherry), she could emerge as a strong regional force after the next general elections. Says Manian, "If the bjp or the Congress want to form a government, they will have to come to us." The way the aiadmk sees it, Jayalalitha is in a strong position to win 30, if not more, seats in the next elections. So, if Chandrababu Naidu can be kingmaker with 28 MPs, Jayalalitha could even be PM.

There is also talk of a realignment of forces at the Centre. Some claim that the Gujarat elections could be a turning point for the nda government, especially if the bjp loses the state. This could prompt the allies to view the bjp as an electoral liability and break ties before the next elections.

Jayalalitha already enjoys a good equation with most regional leaders, including Chandrababu Naidu (who solicited her support for Abdul Kalam), Sharad Pawar and Mulayam Singh Yadav. During his stint as nda's troubleshooter, George Fernandes too had cosied up to Jaya. aiadmk sources also claim that while Left leaders have strongly condemned Jayalalitha's outburst against Sonia, they've conveniently left themselves an escape route, saying that "policies rather than personalities is the issue".

Some others see a larger, more sinister intent. Says Ahmed Patel, Sonia's political secretary: "Jayalalitha is acting at the behest of someone who wants to be prime minister without an election (read Advani)." Even after breaking ties with the bjp, they say, Jaya maintains close rapport with Advani. In fact, when she visited Delhi after becoming CM, Advani hosted a lunch for her at his residence.

Tamil Nadu Congress chief E.K.V.S. Elangovan is also talking of a 'Jayalalitha-rss-Advani nexus'. Party sources claim that it is S. Gurumurthy of the Swadeshi Jagaran Manch who is providing Jaya cannon fodder against Sonia. Interestingly, Amma has also reportedly mended fences with old foe Subramanian Swamy. In fact, the first indication that Jaya might attack Sonia came from Swamy's camp. In her outburst, Jaya echoed Swamy's old allegation that Sonia was smuggling antiques out of the country. However, when asked if he and Jayalalitha were conspiring with Advani against Sonia, Swamy told the press, "I don't need Advani to topple this government."

Except for the Advani conspiracy theory, the Congress hasn't got much to explain for Amma's attack. Congressmen are even peeved by the fact that 10 Janpath hasn't given them any clear direction on how to handle the matter. Sonia's initial "let's play it down" has now been modified to "let the general secretaries decide".Oscar Fernandes has been deputed to arrive at a consensus and devise a gameplan. This decision, incidentally, came three days after the attack.

Some credence is also being attached to Sonia's statements in Tamil Nadu. According to a general secretary, "Ten days ago when Sonia addressed a rally in Madurai, she promised to bring back Kamaraj Raj to the state. Jayalalitha took this as an insult and has retaliated in Delhi."

The relationship between the two women has never been smooth despite the fact that the Congress and aiadmk fought the 1999 assembly elections together. During the campaign itself, Jayalalitha snubbed Sonia by not showing up for a joint rally in Villupuram. And later, not only did Amma keep the Congress out of government, she also demanded that the Congress change its current PCC chief, Elangovan.

Jaya has demonstrated that she's a formidable foe. And with her threatening to go on a countrywide agitation raking up the foreigner issue, the Congress needs to come up with something more concrete than a show of hands at a party gathering.