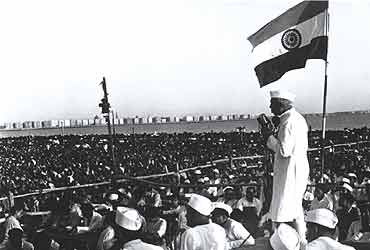 A society that is founded on oral traditions, that has seen such profound transformations and that has produced so many remarkable public figures is a natural habitat for great speeches. But standard compendiums have not done us justice at all. Brian MacArthur's The Penguin Book of Twentieth Century Speeches, for instance, has only four Indian contributions. These are two of Mahatma Gandhi—his iconoclastic blast at the opening of Banaras Hindu University on February 4, 1916, and the March 23, 1922, defence at the famous Ahmedabad trial—and two of Jawaharlal Nehru—'Tryst with destiny' of August 14, 1947, and 'the light has gone out of our lives' of January 30, 1948. William Safire's Lend Me Your Ears has just Gandhi's defence and Nehru's eulogy among the great speeches in history.

Now two eminent Indian historians have given us separate anthologies of the most important speeches made by Indians. Rakesh Batabyal's The Penguin Book of Modern Indian Speeches covers the period 1877-2004, while Rudrangshu Mukherjee's Great Speeches of Modern India spans 1865-2004. Both are valuable not just for the speeches included but also for the accompanying commentary that explains their larger significance. Batabyal's anthology is more extensively researched and wide-ranging, his commentary more detailed.