For the later batsmen to do well, the openers have to take the sting off the ball 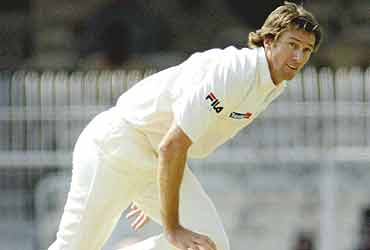 outlookindia.com
-0001-11-30T00:00:00+0553
It's great to finally land in India and be with the team as it enters the crucial second phase of the TVS Series for the Border-Gavaskar Trophy. The injury lay-off was really frustrating because I had been thinking about this tour for many months, so I'm glad that I'll be up for it at least in the last Test. At first I thought I would miss only one Test, but the repeated delays in my plans made me worried that I would not make it to India at all. I'm relieved that I'm finally here, with my hand almost as good as new.

I had a few hits before and during the game at Nagpur and I'm pleased to see that my finger has really healed well. I joined the team on Friday night in Mumbai, and the break between Tests allowed me to catch up with all that I had missed over the last three weeks. I am raring to be out there in the middle, which is why I was going out with the drinks and even with the towel whenever a wicket fell. Being out there in the middle is a very special feeling, and I'm really trying my best to be part of the action. 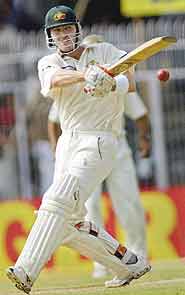 There was plenty of talk about the Nagpur wicket ahead of the game, since there was a fair covering of grass on it. At the end of two days, India's fears that the wicket suits our bowlers more than theirs are confirmed. When I saw the wicket I thought it would be a good toss for Adam to lose because bowling on that wicket could have been quite productive, given our in-form pace attack and the lean trot that most of the Indians have been going through in this series. As it happened, we won the toss and elected to bat. Matthew Hayden and Justin Langer told me later that the first hour was pretty tough, and it was crucial for us that they saw off the new ball before they got out. We had a first-session wobble, but once again Damien Martyn showed us what a class act he is. He was ably supported by Darren Lehmann in the middle session, and the two of them went at almost five an over in that phase.

I know that Matthew and Justin will be disappointed that they have got starts in every game but have not been able to convert them into big scores. However, as a team we are happy that they see off the new ball, and that is a major reason for the success of the middle order. With the bulk of runs being scored by the middle order, the one batsman who is really shining bright is Martyn. There has never been a doubt in my mind that he is a gifted Test-level batsmen. I'm really happy with the way he fared in Sri Lanka and now here because he has vindicated the faith the selectors reposed in him all these years. The centuries he made in Chennai as well as here were really great knocks because he took the momentum back from the Indians at crucial points in both Tests. I would have liked him to score a few more runs in this Test, but his 114 was damaging enough for the bowlers.

When I looked at the pitch on the eve of the Test, I thought a first innings total of 400 to 450 would be a good one. Our rate of scoring was up from the earlier Tests and I think the pitch played its best on the first day. When the grass gives way to uneven bounce, an inevitable situation in this part of the world, the Indian batsmen found it tough to score at even two an over in the second day. The Indians have been having a few selection problems thanks to continuing injury problems. I was surprised to see Akash Chopra back in the side in place of Yuvraj Singh. The only possible reason for Chopra's return could be the fact that the Nagpur pitch had a pacy look to it and the Indian thinktank felt a regular opener would be a safer option. Unfortunately, the Sehwag-Chopra duo has not yet replicated the solid opening stands they had in Australia last year. One of the main reasons why the Indian middle order is not firing is because they are coming to bat against the new ball.

The absence of Saurav Ganguly is a blow that should temper the elation of having Sachin Tendulkar back in action.While the latter's return is a huge bonus for the side, Ganguly's absence means that the batting line-up of Sehwag, Dravid, Sachin, Laxman and Ganguly—the backbone of India for the last few years—is still incomplete. To make matters worse, Laxman, who has been so phenomenal against us in the last two series, has just not fired this time. Sachin's first innings after his return underlines how difficult it is to come back to top-level cricket after a long absence. The absence of Harbhajan Singh will be even more unsettling for the Indians because they rely heavily on him. The off-spinner's absence will only compound the captain's bowling problems since the side is already without Irfan Pathan. I spoke to Ganguly on the first day of the Test and he said he had got a side strain in the Bangalore Test itself, and that strain got aggravated over time. I saw him practice a couple of days before the Test, so perhaps he was trying his best to make it for the game. He looked fine then, but obviously things got worse just before the game.

Nagpur saw Glenn McGrath becoming the first pace bowler to complete 100 Tests for Australia. It's a big occasion for the great Glenn, and we had a small meeting on the eve of the Test, where members of the team spoke about the years they had spent with Glenn as a teammate. There is no doubt that his contribution to making this a world-beating team is huge. Even on this tour, he has given us an opportunity in the first few overs in every Test. His accuracy, discipline and wicket-taking ability have made him the architect of many of our famous wins at home and abroad. He has a great average of four and a half wickets per Test, and his average of runs per wickets puts him up there with the best in the game. It's significant that he stayed injury-free for a large part of his career—something a lot of the younger generation of bowlers the world over should try and emulate. It's really great that I'm here with Glenn as he crosses this great milestone. He has been the premier pace bowler for Australia in the last decade and I wish him many more milestones in the coming years.

What's In A Rating?