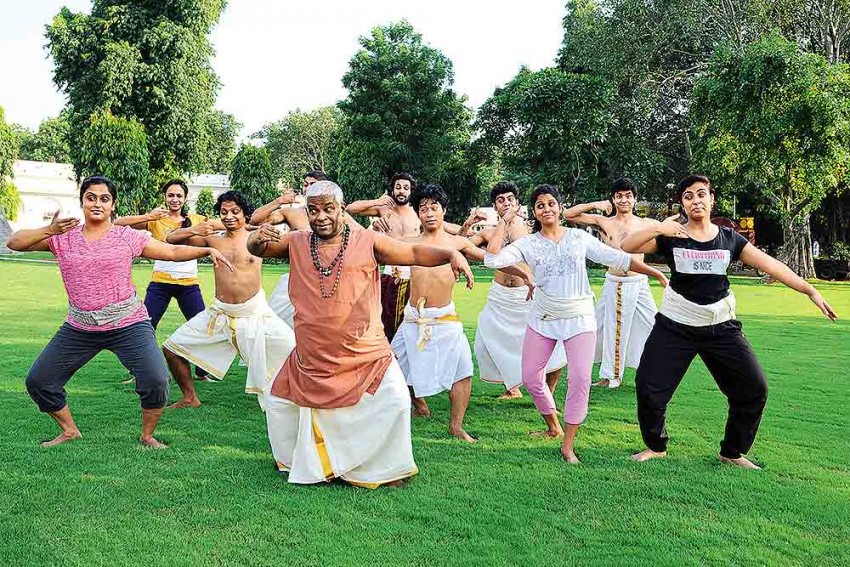 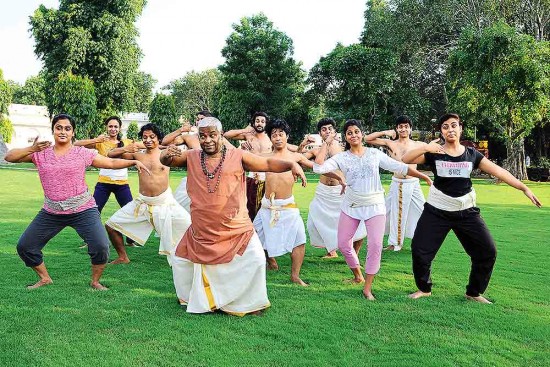 Clad in a black T-shirt and ­leggings, a fashionable young student perches atop a wooden stool, trying to emote once more a challenging scene from a ­theatrical tradition whose history stretches back 1500 years. It’s a famed episode from Koodiyattam, where the actor, as Ravana during a flashback, alternates between the roles of Shiva and Parvati. While the narrator is indeed the Lankan king of the Ramayana, here he has to move and freeze into the poses of both the Lord of Kailasa and his consort. A ­sequence of evolutions from the masculine profile to the feminine to the masculine once again.

The students stand in a circle on quarter-bent legs and roll their wrists forward, chanting Jitva Trailokyamajwa, in near-unison.

By the time Yashaswini R. is through with her 15-minute slice of the mime, dotted with slow and detailed mudras to the beats and rolls on the mizhavu drum, tears trickle down her cheeks. It is not that the student is overcome with emotion; it’s because she has given enormous thrust to her eye muscles—something she seldom does as a student at the National School of Drama (NSD). Her master has vital advice for the pupil ­facing the lit lamp that is her cornerstone. “Your body should only shiver in anger. It shouldn’t jerk,” points out septuagenarian Venu G. “For that, regulate your breath.” The girl, from Karnataka, smiles and nods in agreement.

Outside the rectangular classroom with green net-like curtains along its walls, overnight rains  have turned the morning skies ashen. It’s the last leg of the ­monsoon in north India, and the six-decade-old institution in Delhi has had its leafy campus drenched in weekend downpours with a fury like that of the Nataraja. The next to perform before Venu is Salim Husein Mulla. Bare-chested, as is the norm for boys at the Koodiyattam training, the Maharashtrian is a classmate of Yashaswini—both are halfway through their three-year residential course in the dramatic arts. Salim repeats the act—from ‘Parvati Viraham’. “You didn’t ­position your arms horizontally enough to make that gesture effective; else everything was by and large fine,” Venu tells him, re-enacting the flawed segment with predictable ease.

This has been the tenth consecutive year that NSD students have had a crash course in Kerala’s Koodiyattam, which is the country’s oldest surviving Sanskrit theatre. Come July, the school wakes up to recitations of shlokas from the Pura­nas. The weather seldom deters the students from training themselves in the basic lessons, including the intonation of the four-liners. They stand in a circle on quarter-bent legs and roll the wrists ­forward. Jitva Trailokyamajwa, they chant in near-unison; this stanza was once a favourite of the iconic Ammannur Madhava Chakyar, a Koodiyattam revivalist of the past century.

Venu, 72, was one of the leading disciples of Ammannur (1917-2008), and he has supported and carried forward the maven’s efforts to ­embellish the classicism of Koodiyattam and pass it to a whole new generation. Their journey ­together began in the mid-1970s, and soon there was an attempt to expose NSD undergraduates to the tradition. “It was a sour ­experience. The students were disrespectful to anything traditional,” Venu gulps down, recalling the time when theatre personality B.V. Karanth headed the institution (1977-82). Much closer to Ammannur’s home in central Kerala’s Irinjalakuda, the School of Drama in Thrissur, too, invited the veteran as a guest lecturer; this also failed to go smoothly. “The guru being from the old world, he couldn’t sense the syllabus ­requirements of a contemporary theatre student,” notes Venu. In those days, ­performing Chakyars (male members of the temple-allied community traditionally engaged with Koodiyattam) mostly lived in self-imposed social isolation.

Travancore-born Venu was initially a practitioner of Kathakali, which took him to Bhopal in 1966 to teach the dance-drama at Madhya Pradesh Kala Parishad. While there, he would have the opportunity to study Kathak and Manipuri, ­besides instrumental Hindustani music. That stint (“I once went to Maihar to meet ­[multi-instrumentalist] ­­­­Ustad Alauddin Khan, who was then into his 100s”) particularly broa­dened the ­youngster’s horizons. On a break in Kerala, Venu met Ammannur—and the hazel-eyed master’s artistry bowled him over. 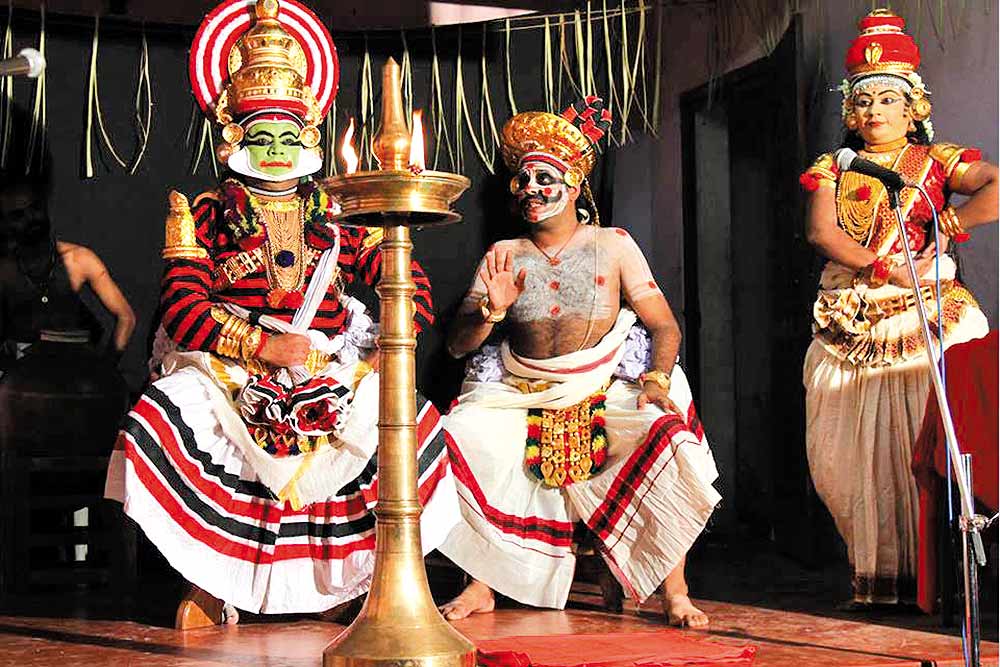 From that point on, Kood­iyattam became his driving passion alongside the allied ­female solo art, Nangiarkoothu. Besides ­performing, he began to conduct ­research on the history, aesthetics and sociology of these art forms, evolving into an academic with an innovative spirit. One play he brought back to life in Koodiyattam was Kalidasa’s  Abhijnana Shak­untalam. Abhi­lash Pillai, a teacher at NSD, was among those who watched a performance of the revived classic in 2002.

“On seeing it, I felt the need to make Koodiyattam a part of my drama studies,” says Pillai. He proposed the idea to Venu, who initially did not react with much enthusiasm.  However, Pillai convinced him of a “changed campus culture”, and from 2008 Venu and his team have been regulars at the campus during July-September. As is the custom, their Navarasa Sadhana workshop concluded with a stage show of the students in minimal make-up and costume.

So, what do the students learn?  They work on eye exercises and the nine facial emotions or navarasa. In addition, they learn ways of rendering Koodiyattam shlokas, which act as the plank for the characters to develop the idea through hand gestures; this development paves the way for subplots. ‘Parvati Viraham’ is itself framed through one such development, point out Ammannur’s young ­disciples Rajaneesh Chakyar, Sooraj Nambiar and Ranjith Chakyar, who are part of Venu’s team at NSD. Another ­example is ‘Pada Purappad’, or war dance, a contrastingly footwork-rich piece of vibrant choreography that portrays the readying of weapons for battle.

“One tests your mental stamina; the other the physical,” reveals Venu, with a cryptic smile. ‘Parvati Viraham’, which depicts the amusing build-up of a quarrel between the divine couple before they hug each other in an unexpected climax, is “the world’s only classical theatre scene that demands the performer to show both masculine and feminine body languages back to back”.

NSD’s current director Waman Kendre is impressed, having himself been a ­researcher of Kerala’s ritualistic and folk theatre. “In 1982, I had watched in ­wonder Koo­diyattam for days toget­her at the famed Koo­­­dalmanikyam temple in Irinjalakuda,” he winds back. Chips in Venu: “Oh yeah, it was just one act performed over as many as 16 nights. ‘Ashokavanikan­kam’, from (Sha­ktibhadra’s) Ash­­­­ch­­aryachoodamani.”

“Koodiyattam can strengthen the concept of soliloquy in the student, as the form typically ­freezes plots for a long time.”

To encapsulate the basic lessons and on-stage scenes of such a layered art-form into a 90-day crash course to the general benefit of students aspiring for a futuristic theatre requires a lot of knowledge and thought, point out artistes who have attended the workshop. They include act­ors Adil Hussain, Kalyani Mulay, Paulami Bose and dancer Priyadarshini Ghosh, besides educationist T. Sasitharan who runs the Singapore-based Inter­cultural Theatre Institute where Venu first unveiled his package.

Navarasa Sadhana, says Dubai-based actor-storyteller Shereen Saif, helps strengthen the actor’s capability to deliver an aesthetic experience. It “also serves as a cathartic tool for the actor to purge oneself emotionally,” she adds. Theatre-maker Sreejith Ramanan, who teaches at the School of Drama at Thrissur, the course helps an actor or director to “connect” with various traditional performing arts of the world.

Responses from current NSD students are similarly positive. “Koodiyattam’s unhurried pace inspires me to plumb the depths of facial acting,” says Ashwini Joshi. Bhumisuta Das from Bengal says she was able to realise the strength of acting using less space. Adds Diksha Tiwari: “It’s ­refreshing to learn that one should first feel and then act.”

As the day’s class winds up, the ­students untie the long kaccha cloth they had tied round the waist to ensure ­upright ­postures. They queue up before the ­master to touch his feet. Before ­exiting, someone blows out the wick of the ­vilakku, though it is apparent that one has found a new inner flame.