Reports and analysis from Delhi, Lahore and London -- the American plans as they unfold... 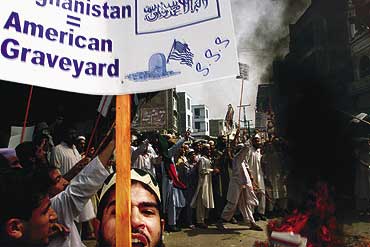 Also forming specific targets are the Taliban government buildings in Jalalabad and the Arab residential quarters in Kabul, and 18 airstrips and bridges across Afghanistan. Pakistani sources say there are plans to besiege and capture the Afghan cities of Medan, Galdek, Maroof as well as the Arghastan valley. The US may also be looking at possible ground operations of a mop-up nature after targets have been softened up.

In addition, a joint intelligence team comprising professionals from Pakistan, the US, Russia and Tajikistan is being cobbled up to track down bin Laden. There has been a second round of consultations between the US and Pakistani officials to narrow down the agenda and define an effective course of action. Taliban supremo Mullah Omar has been served with a notice to cooperate or face the consequences. It's a tough choice for him. Other than the intimate financial connections between Osama's Al Qaeda and the Taliban, Omar is also married to one of Osama's five daughters. It is not easy to distinguish exactly where the Taliban stops and the Al Qaeda begins.