Only A Homeland For A Toothless Paper Tiger 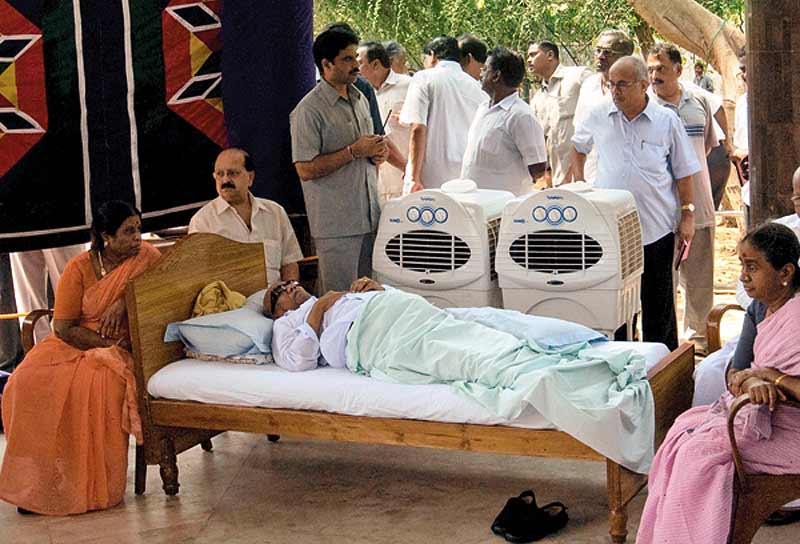 Marx begins his Eighteenth Brumaire of Louis Bonaparte, modifying Hegel’s assertion that history always happens twice, by adding that it occurs “once as tragedy, and again as farce”. First, the tragedy.

On April 27, 2009, in the absurd theatre of parliamentary electoral politics, M. Karunanidhi mercilessly wagered the lives of more than a hundred thousand Eelam Tamils facing imminent genocide by embarking on what must have been a historic act of protest—an ‘indefinite’ hunger strike, strategically timed between breakfast and lunch. And then he declared, just as dramatically, that he was giving up his fast having received an assurance from P. Chidambaram that Colombo had decla­red a cessation of hostilities. Even as this ready­made propaganda was being disseminated, bombs continued to rain in the Vanni. Mulli­vaiykkaal, the tiny sliver of beach that became the last refuge of the Eelam Tamil people, turned into a mass grave. In the ensuing days, Karunanidhi kept himself occupied by exercising his literary talents in letters to the prime minister. While the Sri Lankan state went about its action plan of wiping out Tamils, India went about its business as usual. The general elections were held. Parties, waving their manifestos, partied. Anywhere between 40,000 and 1,00,000 Eelam Tamils were killed, but the Congress-led UPA combine was back in power. Even the DMK did not suffer a major setback. Karunanidhi proved his mettle as playwright, co-authoring a tragedy with the Rajapakse Brothers & Imperialist Powers, becoming an accomplice to the genocide of Eelam Tamils.

Now, the farce. After nine years of mollycoddling the Congress, Karunanidhi seizes an opportune moment to demand that New Delhi act on the Eelam Tamils issue, cites his problems with the diluted draft of the UN resolution on Sri Lanka, talks of being let down, and after the necessary formalities, pulls out. Perhaps, he believes this withdrawal will whitewash his culpability and redeem him for the next round of elections.

Notwithstanding the fact that the DMK drama lacks credibility, there can be no doubt that every subsequent draft of the US-backed resolution at the UNHRC has been a shadow of its former self. Documents are seldom known to have undertaken self-destruct and suicide missions, yet such a mystery shrouds the various versions of the Sri Lanka resolution and suggests an Indian hand. There is no mention of “an independent and credible international investigation” as mandated by the report of the UN High Commissioner for Human Rights, expressions of concern over the “failure” of devolution of powers have disappeared, “encourages” has become the new polite form for “urges”, and the dumbing down has ensured that “unfettered access” to special rapporteurs becomes “extending invitations”. G-for-Genocide is never mentioned.

Sri Lanka’s spectacular record at the UN owes much to the island’s practice of giving alleged war criminals the additional charge of diplomacy and deliberate distortion so that truth does not see the light of day. Look at the line-up and the concomitant celebration of ruthless slau­ghter: Major General Jagath Dias has been appointed vice-ambassador to Germany for humanitarian service rendered in bombing hospitals in the Vanni. Major General Shavendra Silva became Sri Lanka’s deputy permanent representative to the UN for his gallant act of having shot dead Tamil Tigers surrendering with white flags. Admiral Thisara Samara­singhe has been appointed ambassador to Australia for shelling into No Fire Zones.

In May 2009, when Switzerland and the European Union member states sought to table a resolution at an emergency meeting of the UNHRC to take stock of human rights violations in the final days of the war, Colombo’s envoy ranted against “western colonisers” and reminded everybody that “the only enemy of Sri Lanka was the one within its borders”. The Sri Lankan state pre-empted that move by introducing a self-congratulatory resolution praising the government for its promotion of human rights.

Subsequent drafts of the US-backed resolution is a shadow of the last, the mystery around its many versions suggests an Indian hand.

When India voted against Sri Lanka at the UNHRC last year, Manmohan Singh patched up what looked like a lover’s quarrel by reminding Rajapakse, “Your Excellency would be aware that we spared no effort and were successful in introducing an element of balance in the language of the resolution.” Adept in this art, Manmohan bowed, knelt and grovelled until His Excellency was pleased with such instant apology. As if to atone for the past trespass, India’s external affairs minister suggested this March that the US and Sri Lanka should “directly engage on the draft resolution and aim for a mutually acceptable outcome”. The watered-down version of the draft resolution suggests that the dialogue has been fruitful and a deal has been struck. We can wait to see the outcome; perhaps the US is sitting with a map and tossing a coin to decide if it wants a breezy port or an airbase in the projected paradise of Sri Lanka.

On the other hand, India is glad with the tourists, the trade in tea and the house-building tenders coming its way, and its only complaint is that its enemies too are the ones within its borders—enemies who speak Tamil, enemies who remind New Delhi of its complicity in the genocide, enemies who take to the streets, enemies who threaten the sovereignty of the Indian nation at the drop of a dhoti. Mother India is ashamed of Tamil antics, she consoles herself that curfews and closure of colleges are the only cures, and hopes that no one in the meanwhile discusses the Kashmiri skeletons in her closet. She is unwilling to accept that the North and East of the island of Sri Lanka is a Tamil homeland, she refuses to look upon Eelam Tamils as a nation with its own territory, she does not dare to change her foreign policy decision on self-determination of the Eelam Tamils and she doesn’t have the patience to expect a political settlement from both the Tamil and Sinhala sides. She lacks political conviction, she sheds no tears for the dead, she seeks no justice for the aggrieved. Instead, she leans on Uncle Sam’s shoulder and watches the proceedings with wide-eyed wonder. Her people, like people around the world, know that it is not easy to humiliate power.

Justice in this unipolar world revolves around the UN and the imperialist powers that it serves. Even though the Eelam Tamils have historical sovereignty and earned sovereignty, if they believe that separation alone can guarantee them safety, their last recourse to save themselves from complete extermination is to stake a claim to remedial sovereignty before the UN.

Contrary to their expectations of justice and a permanent political settlement, both last year’s resolution and this year’s draft push for an implementation of the recommendations suggested by the Lessons Learnt and Reconciliation Commission’s (LLRC) Report. Eelam Tamils have responded to the LLRC with caution--some term it a mockery of justice where Rajapakse is both the culprit and the judge, while others have pointed out that the LLRC report provides a dangerous blueprint for structural and cultural genocide of Eelam Tamils. Such alarm is not unjustified: the LLRC report calls for a trilingual nation by 2020, it insists that no district or province be categorised on the basis of language, and it categorically denies the existence of a historical Tamil homeland in the North and East of the island. Carrying out the diktats of such a document will only annihilate the genuine aspirations and right to self-determination of the Eelam Tamils.

There is enough evidence to suggest that the UN has erred in its treatment of this issue. In the post-2009 scenario, the UN has admitted its failure in three of its own reports. The Dublin War Crimes Tribunal Report and Norway’s own report examining the role it played in the peace process should also be taken into consideration to evaluate the UN position. When elected politicians and foreign policy diplomats are satisfied with toothless paper tigers like the present UN resolution, and their prejudice makes them unwilling to explore the possibility of bringing this issue before the UN Security Council, only people’s power could bring about an attitudinal change. The massive protests in Tamil Nadu signal a new chapter in this radical struggle.

‘The UN Resolution Is A Misplaced Initiative’