One Yeddy Vs The World

The state BJP looks askance as a dictatorial Yediyurappa rages 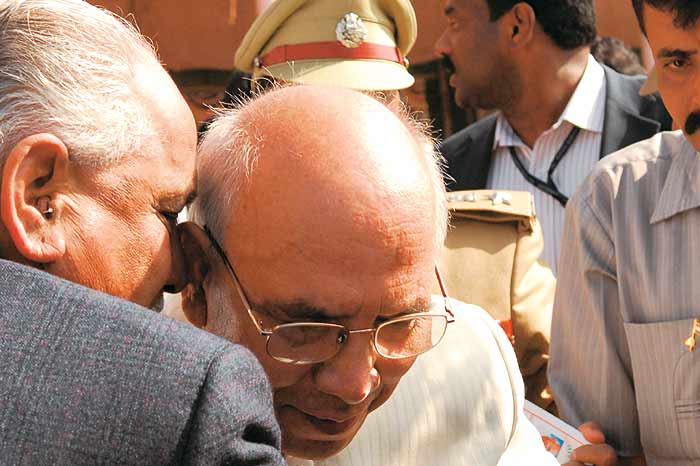 Karnataka CM B.S. Yediyurappa was showing signs of stress on January 21 evening, but no one expected him to altogether lose his temper. It had been a couple of hours since Karnataka governor H.R. Bharadwaj had accorded sanction to prosecute him on 15 instances of corruption. There was a press meet happening outside the CM’s Race Course Road residence where the state BJP president was issuing a ‘voluntary bandh’ call. Inside, in one of the rooms, some senior party colleagues were discussing strategy. The CM unexpectedly barged in there, lifted a chair, threw it and pointing a finger at one particular colleague (a national general secretary of the party, no less) let out a volley of abuses: “You...this is all happening because of you. Leave my house. Now. Immediately.” The leader quietly left. Those witness to the incident were dumbfounded for awhile, though later it was more of relief that it had not distracted the media outside.

Cut to January 24—the CM is flying back from Pune, in a private jet, after attending the funeral of Pandit Bhimsen Joshi. He spots an item in a local newspaper that disputes the legality of the governor’s prosecution sanction. He’s happy it’s something in his favour. He instantly calls his assistant and orders him to cut and preserve the news report. He doesn’t want to let go of an inch of evidence against the governor. The article also triggers a monologue in which the CM repeats his oft-quoted lines, “The whole country is talking about the injustice meted out to me...see, Advaniji has himself led the BJP delegation this morning to Rashtrapati Bhavan against the governor.... Compared to what Deve Gowda, his sons and the Congress leaders have amassed, what my family has done is nothing. I have just got bad publicity.... By the way, why are criminal cases being filed against me? At best, they are civil matters, aren’t they?”

These two incidents pretty much unveil the crisis and confusion within the saffron government in Karnataka. Despite the slogan-shouting, bandhs, boycotts and the seeming unity created before the TV cameras, there are palpable undercurrents of division. Yediyurappa’s stubborn stand on saving his chair at any cost is slowly generating a dissenting murmur. Interestingly, the state unit is at odds to interpret BJP president Nitin Gadkari’s statement that there was nothing “illegal” in the CM’s misdemeanours, although they were “immoral”. Whether ‘immorality’ constitutes a greater crime than ‘illegality’ remains to be clarified. (Earlier, there was also a view that L.K. Advani was against BSY’s continuation, but then he went to see the President in his support. So has he come around to endorsing the controversial CM now?) 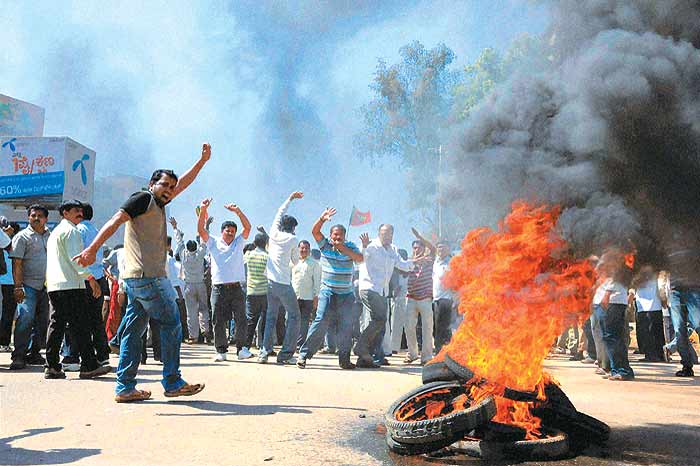 Let it burn BJP activists protest against the governor in Chikmagalur, Jan 22

What has caused further anxiety is a rumour from the CM’s camp that he is planning a ‘dhamaka budget’ in February—after which he would recommend dissolution of the assembly. State BJP leaders are none too impressed, contending that this is easier said than done. As a cabinet minister put it, “If push comes to shove, the central leaders may want a leadership change to happen. But they wouldn’t think of sacrificing a government, especially when we are still left with over two years. If the matter is put before the cabinet, more than 15 of us are going to oppose it.” Apparently, some legislators wanted to oppose the idea of dissolution at a January 25 party meeting itself but were denied the opportunity.

Some of them advised BSY not to post the cabinet letter opposing prosecution sanction but “he wouldn’t listen”.

One of Yediyurappa’s close aides did confirm that the CM preferred going to the polls than handing over charge to another leader. “Isn’t it understandable?” he asked, adding, “He built the party for the last three decades and brought it to power. When he has mass support, why should he listen to the commands and reprimands of Delhi leaders? There will be no government without him. He is a shrewd politician, he can’t be fooled into quitting. He’s seen what has happened to mass leaders like Uma Bharati, Madan Lal Khurana and Kalyan Singh in the party. Uma quit as CM when a Hubli court issued a warrant, but was she reinstated after she was acquitted? She was shown the door. Many second-rung leaders in Delhi are also pleading that the BJP shouldn’t make an Uttar Pradesh out of Karnataka. Under the circumstances, it is best to go to the polls under his leadership.”

The aide’s passionate defence of his boss continued as he pointed to the Shibu Soren case in Jharkhand: “The man was convicted in a murder case, but was still made CM. Is our CM’s case as bad as that? So why these double standards? What image issue are they talking about? This argument for a change of leadership that some in our party are making is baseless. It’s the conspiracy of a particular community. The central leaders will advise Yediyurappa to keep his temper, but will they advise people like Ananth Kumar not to destabilise the government? People take advantage of the CM’s short temper and some have found ways of irritating him.”

The leadership change issue is a sticky one for Yediyurappa—he thinks a new leader will render him irrelevant in the two-and-a-half years left for the next assembly polls. He also fears being substituted by a credible Lingayat leader as that would challenge his hold over the community (the party’s core support base in the state). In the past, Yediyurappa has systematically sidelined emerging Lingayat leaders within the BJP so as to maintain his stranglehold over the party. The ones he ejected include: B.B. Shivappa, Basavaraj Patil Sedam, S. Mallikarjunaiah, Basavaraj Patil Yatnal and Babagouda Patil.

A cabinet colleague of BSY says, “As long as one Lingayat is replaced by another, the powerful seminaries of the community will have no problem. The problem will arise only if a Lingayat is replaced by a Brahmin or a leader from any other community.” He also recalled a discussion that he witnessed between two colleagues at a night-halt during the recent zilla panchayat poll campaign: “These two are perceived to be close to the CM, but they were worried that the party will perform poorly even in its stronghold if it went to polls under Yediyurappa’s leadership. They felt his corrupt image will damage us,” he said. The recent panchayat poll results did come as a warning to the BJP, showing that the party’s geographical spread has shrunk. It lost Bijapur and Karwar districts to the Congress and only just scraped through in Bagalkot district. It was also the first time in the history of the polls that a ruling party was unable to take total control of the panchayats.

The CM’s aide rubbishes the corruption stories, saying that if BSY was really corrupt he would have joined the Bellary Reddys, instead of fighting them. “How is it that the media has stopped talking about the monumental corruption of the Reddys and are focusing only on Yediyurappa? A Supreme Court panel has indicted them, but has any central BJP leader asked them to quit the cabinet? Everybody knows whose support they enjoy. Yediyurappa’s problem is that he has no godfather in Delhi,” he says. When asked about the specific cases of corruption, he dismisses it as “small greed”.

Where Is The Driver’s Seat?

Interestingly, as long as governor H.R. Bharadwaj had his guns trained on the Reddys in the illegal mining and office-of-profit cases, the CM had enjoyed a cosy relationship with him. It’s quite mysterious the way in which it all turned sour. In the past week, with the CM and governor on a collision course, a cabinet minister says that some of them privately advised the former not to post the cabinet’s letter opposing prosecution sanction but “he wouldn’t listen”. Many in the cabinet and party fear Yediyurappa’s temper and “vindictive nature” and hence did not press for a debate. So after all that display of anger on January 21, why isn’t he seeking a stay on the prosecution sanction in the high court? “Well, he’s been advised that seeking a stay is a huge risk. If the courts say they are ‘maintainable’, then it would mean he is prima facie guilty and there would be further embarrassment,” the minister explained.  Another BJP legislator summed it all up: “Many of us get the feeling that we are left fighting the battles of an individual and not the party.” It can’t be helped, Yediyurappa thinks he is the party in Karnataka. 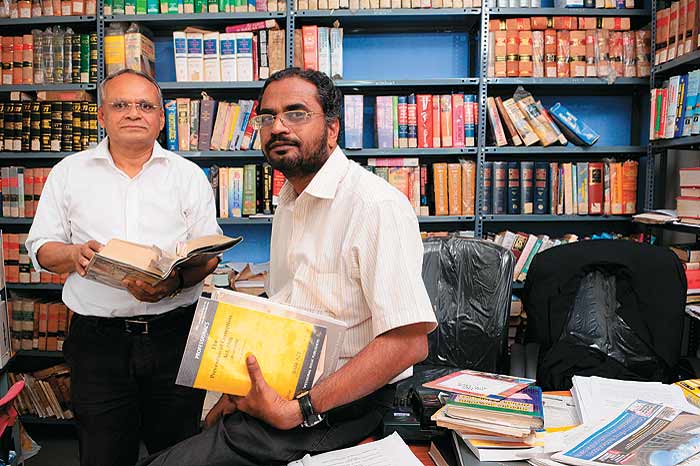 They’re the law Basha and Balraj. (Photograph by Nilotpal Baruah)

Meanwhile, BSY has promised to keep aside a sum of Rs 5 crore in the next budget to reward whistle-blowers who come up with information on benami transactions of politicians. The irony is that the two lawyers from his hometown Shimoga who blew the whistle on him, Sirajin Basha and K.N. Balraj, live in fear now. Immediately after they had made their complaint to the governor on December 28, they started getting threat calls; a history-sheeter hovered around their office for a couple of days and then there was also a visit from intelligence officials in Shimoga (between January 2-5), who made inquiries with their neighbours about their past and affiliations. They mentioned all this in their letter to the governor (dated January 6) after which they were assigned a constable to guard them.

So what inspired them to take up this enormous litigation? “This regime has tried to corrupt every individual, every institution and every progressive element...it’s a first in the history of the state. Plus, it shamelessly defends corruption, and even tries to legalise it. This cannot go on,” they say. The two lawyers have quite a reputation in Shimoga town and the bar association as well for their radical ways. One of them, many years ago, apparently tried to fix a corrupt religious head to the great consternation of his community. They shifted to Bangalore two years ago and call themselves ‘justice lawyers’. It’s apparently in sync with their idealism.