Home  »  Magazine  »  Business  » Evaluation »  One Year Of GST: Too Much Grind For The Motors

One Year Of GST: Too Much Grind For The Motors

Coimbatore, the hub of small industries, continues to reel under GST’s impact 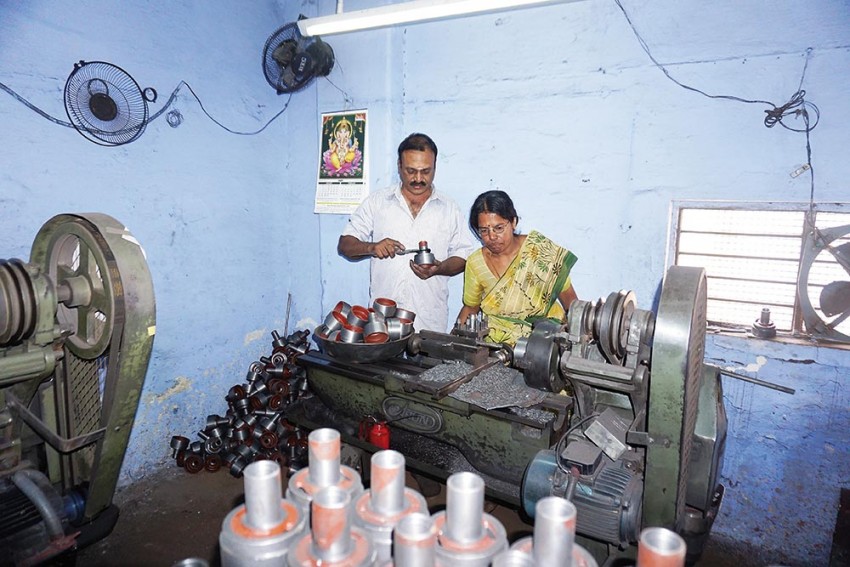 Shaken Up
A Coimbatore pump manufacturer in his workshop
Photograph by G.C. Shekhar
G.C. Shekhar June 21, 2018 00:00 IST One Year Of GST: Too Much Grind For The Motors 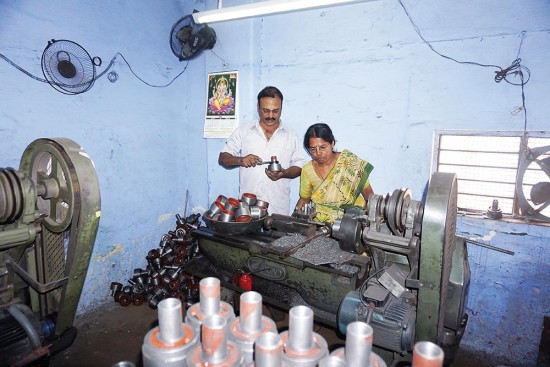 Going by PM Modi’s yardstick, selling pakodas is a job and S. Krishnakumar should easily qualify as employed: he runs a roadside eatery in Coimba­tore, Tamil Nadu. But the eatery has been a demotion of sorts for Krishnakumar. He used to run a lathe workshop that manufactured parts for motor pumps. It also emp­loyed six people. But he had to send them away as his unit folded up. He has only one villain to blame for his present travails—GST.

“Before GST, we had steady orders of parts from pump makers. But they started dwindling after the tax came into place,” Krishnakumar tells ­Outlook. “Unless we get job orders for a minimum of Rs 2,000 a day, we cannot pay our workers. The orders came down to a trickle before dying down. Almost all small industries are in the doldrums,” he adds.

Pump parts attract a GST of 18 or 28 per cent. “Since when did they ­become luxury items?” asks a manufacturer.

GST has hit these small lathe operators hard. The government imposed a 12 per cent GST—against the 5 per cent VAT previously—on pumps and motors irrespective of the industry scale of the manufacturer. The concessions and ­incentives enjoyed by the small players also dried up and they could not keep pace with the bigger fish. Over and above, pump parts attract a GST of 18 or 28 per cent. “Since when did motor pump parts become luxury items?” asks K. Maniraj, who is part of an association that represents motor pumps and spare parts manufacturers in Coimbatore.

Coimbatore, which once used to make 25,000 motor pumps a day from 3,000 MSMEs and meet 50 per cent of the all-India demand, had been nicknamed ‘pump city’. Now, at least 300 MSME units have shut shop while another 1,000 have been downsized, says Maniraj. To add to the blow, an 18 per cent GST has been imposed on ‘job orders’ (the total amount of the business deal). For ­instance, if a small lathe unit, which gets raw materials from the pump manufacturer, is asked to make the required parts, he has to pay 18 per cent GST on the value of the job order.

“When Nirmala Sitharaman came to float the idea of a defence corridor in Coimbatore recently—since it was known for its manufacturing sector—an industrialist told the union defence minister that with 18 per cent GST on job orders, there will be no MSMEs left in Coimbatore by the time the corridor ­arrives,” says an industrialist who does not wish to be identified.

The government’s promise, that GST will lower prices for manufacturers and end users, has remained a mirage. “After GST, the prices of raw materials, such as steel and aluminium, which are controlled by big companies, have shot up by 25 per cent,” says J. James of the Tamil Nadu Association of Cottage and Micro Enterprises. “Also, the companies we supply to, including PSUs, take 180 days to settle bills, but we have to pay the GST on the supplied product every month. Where will we find money for that?”

R. Ramamurthy, vice-president of Coi­m­­batore District Small Industries Association (CODISSIA), feels that for a sector that never paid any tax for job ­orders, to cough up 18 per cent as GST is an unreasonable drain  “If micro industries are bleeding today, to whom will the small and medium industries turn for getting their job orders done? ” he asks.

The only bright spot in the GST seems to be the introduction of e-way billing, after which products are reaching their destination in half the time. “My finished goods used to take 15 days to reach BHEL’s Jamshedpur unit, but today they take just seven days,” says Ramamurthy.

N. Rajasekaran, a truck operator from Namakkal, says that his fleet of 11 trucks completes interstate trips faster after the e-way bill kicked in from June 1. “Thankfully, the website is also holding up, but as traffic increases, the backend has to improve,” he adds.

Textile exporters from nearby Tiruppur are also awaiting good news on the GST front. Considered to be one of the largest export hubs of the country, Tiruppur has been reeling due to the twin impact of demonetisation and GST. “Since GST, Tiruppur’s exports have fallen by Rs 2,000 crore,” says Raja Shanmugam, president of the Tiruppur Exporters’ Association.

The post-GST cut in duty draw, back from 7 per cent to 2 per cent, also came as a huge dampener for exporters who would get refunds for both excise and customs duties paid on inputs used for exports earlier. After GST, the government reduced the duty drawback rates and allowed them to be used only for customs duty refunds on inputs used. “The refunds are finally getting cleared but unless the duty drawback is hiked to 4 per cent, Indian textile exporters will continue to lag behind Sri Lanka, Bangla­desh and Vietnam,” says Shanmugam.

By G.C. Shekhar in Coimbatore

One Year Of GST: GST Or GSTN’T?