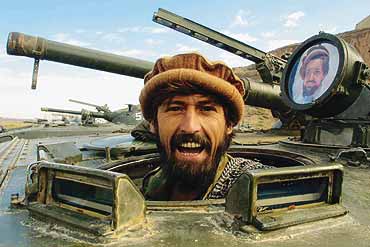 outlookindia.com
-0001-11-30T00:00:00+05:53
Amonth of relentless bombing of Afghanistan yielded some tangible result for the US and its allies—the Northern Alliance (NA) managed to wrest control of Zarai district. The fall of Zarai has created expectations that the NA forces of Abdul Rasheed Dostum, Hizb-e-Wahadat leader Karim Khalili and Ustad Atta Mohammed could push the Taliban out of the strategic town of Mazar-e-Sharif, the capital of Balkh province, and consequently impart a decisive twist to Operation Enduring Freedom.

The fall of Mazar-e-Sharif could make it easier for the NA to launch an assault on Kabul. Otherwise, too, Mazar has considerable strategic importance: it straddles crucial supply routes to Kabul in the south and commands the most important airfield in the north of the country. Were the NA to capture Mazar, Dostum and his forces could also open the road to Uzbekistan, bring in military replenishments and inch their way into the Central Highlands, where the Hazaras, a Shi'ite minority, dominate.

But in what is also turning out to be a propaganda war of claims and counter-claims, there is no way of independently ascertaining the precise distance NA troops are from Mazar-e-Sharif. Zarai district is nearly 70 km south of Mazar, indicating that the alliance still has to cover a considerable distance before threatening the strategic town.

Zarai's fall was confirmed by Taliban education minister Amir Khan Muttaqi on November 6 in Kabul. But a few days later, the NA claimed to have also wrested the districts of Sholgara and Goshbandi, insisting they were only a few kilometres away from preparing for an onslaught on Mazar.

The Taliban, however, contest these claims. "We concede only the fall of Zarai district, 70 km south of Mazar," a Taliban official told Outlook. He says the NA troops are closest to Mazar in the east, some 35 km away. Mazar's significance has prompted the Taliban to dig in its heels in Balkh province. Muttaqi says not only has the Taliban rushed reinforcements for defending Mazar, it even plans to launch counter-attacks in areas where Dostum and his forces have made significant advances.

Defending Mazar are a bunch of armed Pakistani volunteers. One of them, Maulana Duanoor, told Outlook over satellite phone: "The situation is very much under the control of the Taliban in Mazar-e-Sharif. There's no truth in opposition claims that their forces have advanced to seven kilometres of the town."

The fall of Zarai—and other minor gains in Balkh provinces—couldn't have been possible without the new war strategy the US seemed to be following. Instead of bombing all of Afghanistan, and waiting for the 'moderate Taliban' to rebel against Mullah Omar, Washington decided to put its weight behind the NA. The last fortnight witnessed B-52 bombers target frontlines in Balkh and Takhaar provinces as well as airdrop ammunition for the NA forces.

The decision to focus attention on Balkh and Takhaar testifies to Washington's acceptance that the war in Afghanistan is expected to drag on longer than expected. While Balkh shares a border with Uzbekistan, Takhaar is close to Tajikistan; here, forces loyal to Burhanuddin Rabbani, Rasul Sayaf and Hussain Anwari dominate. Gains here could enable the alliance to open the supply route to Tajikistan as well. Entrenched NA troops, with supply lines to Tajikistan and Uzbekistan, and enjoying the backing of the US and Russia, could then prove more than a match to the Taliban which controls Kabul.This is precisely why, strategists say, Americans have concentrated strikes on Kunduz airport and Sher Khan Bandar, bordering Tajikistan. Kunduz had served as a key supply base for the Soviet forces during its occupation of Afghanistan.

More importantly, strategic experts emphasise a forthcoming switch in US war strategy whereby Turkmenistan will likely play a vital role. This became imperative after Uzbek president Islam Karimov turned down two US requests for permission to expand military operations from the Uzbek base of Khanabad.

This prompted Washington to turn elsewhere. Ten days ago, Turkmenistan president S.A. Niyazov agreed to let the US, Russia and Turkey establish air and forward bases in his country for strikes against Afghanistan. Turkmenistan has some key strategic advantages. Nearly 80 per cent of its area is a sparsely-populated desert, considered eminently suitable for military operations; nearly three-fourths of its 4.2 million population is of Turkic origin (the rest are Russian and Uzbeks) and Turkish influence there is strong. Turkmenistan also provides the US a toehold in the region considered rich in oil and gas.

Pakistani sources say that the Americans propose to expand the international airport at Ashgabat, the capital of Turkmenistan, into its main Central Asian air base. The US will also establish new air and land bases at the southwestern town of Kalai Mor, opposite the Afghan town of Herat, and at the southeastern town of Kerki, which is opposite Mazar-e-Sharif and connected by rail link to the capital. Sources say Washington expects to have all three new bases operational by the end of winter, and then prepare for a combined US-Turkish-Russian Spring 2002 offensive against northern Afghanistan. The plan is to seize a broad swathe of territory from Herat to Mazar-e-Sharif and Kholm in the northeast, from where an assault on Kabul would be a lot more easier than it would be today.

The new Turkmenistan-based strategy shows how little the US-led coalition counts on the NA for tangible tactical war gains. Advance bases in Turkmenistan would also be Washington's rejoinder to the demand by British generals to massively expand the US military ground presence and firepower in NA-controlled areas. The Bush strategists had been in no hurry to take British advice on this. Now, they have a viable alternative in Turkmenistan, a land contiguous to the NA-held territory and consequently a good substitute for a large forward base.

The week also saw the Taliban report the death of an American, John Bolton, who was arrested a week ago near the Pak-Afghan border inside Afghanistan. His body was later handed to the Red Cross, which did not comment on the nature of his death. Taliban sources say "he was sick and died". The Taliban also executed Commander Abdul Haq's nephew, Izatullah, and buried him near Jalalabad. The war rages on.