One Shoe Isn’t Quite Enough

The missile he threw at the home minister made a statement; now Jarnail Singh pens a searing book 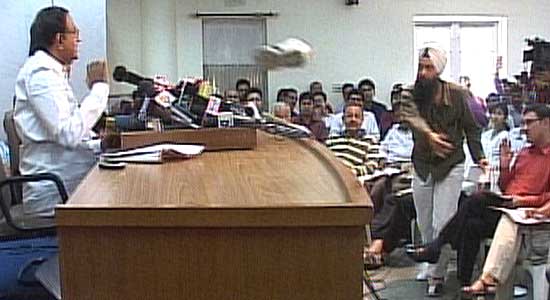 The vicious pre-planned slaughter of the Sikh people in 1984 following Indira Gandhi’s assassination did not just leave every Sikh traumatised. It also deeply affected their psyche, their faith in their neighbours, in the system, in the state, in the very idea of justice itself.

For many of us non-Sikhs, it was a defining moment in our lives. On October 31 that year, I saw Sikhs being beaten on Lodi Road; the police told us to move on and not bother about it since we were not Sikhs. We saw trucks loaded with white-capped men shouting khoon ka badla khoon se lenge. We saved two Sikhs from being thrown over the Safdarjang flyover, hiding them in our car and ensuring they reached home safely. We kept their two-wheeler for over three months till they had the courage to come back for it. On the afternoon of November 1, we found slashed, shattered, blood-covered Sikh families in Trilokpuri.

When we went to the Lt Governor to ask for relief, he told us colour TVs would be provided to see Mrs Gandhi’s funeral.

With a team of university students, I ran a relief camp at Farash Bazaar Police Station for three months, fighting for their rehabilitation. When we went to the Lt Governor on Nov 2 to ask for relief, he told us that colour TVs would be provided in the camps to watch Mrs Gandhi’s funeral. Three days later when all the killing had stopped, I was stopped by armymen with guns. “Where were you three days ago?” I shouted. That was when I discovered the bylanes of Trilokpuri, Nand Nagri and Kalyanpuri colonies. The capital was strewn with molten flesh, burning tyres, tresses of hair. The devastation was worse than any wrought by a natural calamity. It was certainly the day that I, a mother of two children and an IAS officer’s wife, finally grew up. Reading Jarnail Singh’s I Accuse brought the old anger and agony back.

Jarnail’s book is excellent material for a study of the nature of festering injustice. Khushwant Singh’s Foreword speaks of the perpetrators and that “they still need to be brought to justice”. Jarnail gives various examples of how “everything was done to prevent justice from taking its course”. Those who were only children then must know that Sikh homes and establishments were targeted with voters’ lists distributed to organised mobs. Survivors repeatedly mentioned kerosene, iron rods, burning tyres and some inflammable white powder as common methods of killing.

Policemen who prevented killings were summarily transferred; those who allowed and encouraged it or disarmed Sikhs who defended themselves were later promoted. No action was taken against the 145 police personnel mentioned in various reports. The first fir was filed in 1994, 10 years later. Many local perpetrators became councillors, mlas, and even cabinet ministers in Rajiv Gandhi’s time. No statements were taken, chargesheets were deliberately faulty and bail was given to murderers based on cyclo-styled application forms by lawyers close to Congress leaders. Old men defending women and children were killed; some surviving youth became drug addicts. One of the many mass murderers was given life imprisonment. The CBI at one point claimed it had no time to investigate, but had the time to give a clean chit to another perpetrator after polls had been announced. This made home minister P. Chidambaram announce that he was “happy”, provoking Jarnail to throw a shoe at him at a press conference.

Jarnail poignantly describes Delhi neighbourhoods that were innocent and fearless till that fateful day. His disabled older brother was roughed up by the mob and went into shock. “He had always been treated with consideration. That day he learned the only thing that mattered was that he was a Sikh,” Jarnail writes.

Can the Sikhs put the events of 1984 behind them and move on, as the prime minister recently advised them to do? Jarnail writes: “If people have lost their lives in a storm, it is a different matter; but how can a massacre be forgotten? Especially when there’s been no justice?”

Last month, central ministries placed ads in newspapers costing crores for Indira Gandhi’s death anniversary, lauding her many great qualities. It would not have cost anything more to add a few lines paying homage to the Sikhs who were killed in the violence that followed. Clearly, a shoe isn’t enough to remind the cynical and insensitive Congress party of the elusive word ‘justice’.