It’s heads-in-hands stuff. All ten of them. 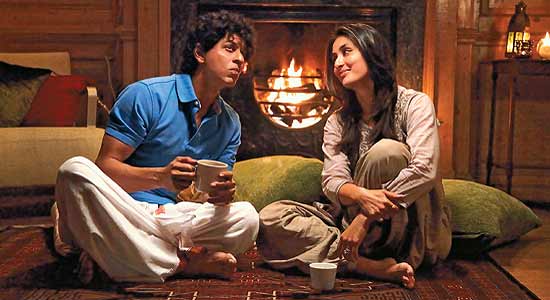 The opening scene of the grand, much hyped and awaited Ra.One warns of the pitfalls lying ahead. A scientist (Shahana Goswami) talks of frequencies, digital data transfer and the virtual world, all of which is nothing more than confusing and meaningless drivel. This is followed up with a protracted and pointless video game sequence (featuring desi girl Priyanka and Khalnayak Dutt) that has no consequence other than sending up the Chinese with its absurd, mocking tone—SRK fights three femme fatales here called ‘Iski Lee’, ‘Uski Lee’ and ‘Sabki Lee’. The politically incorrect humour gets more infantile with SRK playing a bumbling Tamilian video game developer, whose Madrasi accent seems to come and go on a whim. Now, why can’t a geek just be a geek? Why does he have to be a southie geek? Moreover, why does a Tamilian have to eat noodles with curd? And with his hands instead of chopsticks or forks? Surely there’s more to Tamil Nadu than ‘thair saadam’. Later, the puerile humour gets directed at homosexuals and crotch obsession runs like a thread till the end.

To come to the actual film, it’s about an uncool father (SRK) with a hottie wife (Kareena) and a son with an attitude. To please the kid, he designs a video game, where the villain, Ra.One, is stronger than the hero, G.One (with SRK’s face). Things get out of control as Ra.One becomes the proverbial Frankenstein monster, gets a mind of his own and steps out of the game to wreak havoc in the real world. He has the power of ten villains (a metaphorical reference to Dashaanan) and can change form at will.

Shahrukh aims to please his son, play out his own fantasy and approximate Hollywood. It makes for a displeasing combination.

It’s at this moment, almost an hour into the film, that things suddenly leap to life and become quite engrossing. Ra.One chasing Kareena and the kid on the streets of London is riveting stuff as cars get propelled high in the air. The first encounter between Ra.One and G.One is just as enthralling—as is the scene where Ra.One reassembles himself in the shape of Arjun Rampal. But such sequences are few and far in between and not strung together well enough to make for a coherent film. In fact, it’s a film where no character or relationship gets fleshed out well, the climax plays out flat and the crucial fight to the finish meets with a rather tame end.

SRK is aiming to please his son Aryan, playing out his own gaming fantasy and trying to approximate Hollywood, all at one go. But it is an ambition that is confused, which in turn, reflects in the muddled narrative. Low-brow humour, emotions, high action, SFX, heart-tugging songs (like Dildara), SRK tries to have it all without focusing on or doing justice to any single element. He is obviously trying to reach out to younger viewers here, but can’t seem to let go of his core audience—women and families. So even in a sci-fi flick, we find the mandatory karva chauth and an out-of-control train is made to come to a crashing halt right at Ganpati Bappa Morya’s feet. And there’s a quintessentially SRK moment thrown in. “Ye tum kya kar rahe ho?” the kid asks him. “Bahut pit raha hoon,” he replies, in that familiar self-deprecatory tone. In attempting to address everyone in this manner, SRK satisfies no one and alienates even die-hard fans.

The half-baked film also reflects a larger uncertainty that has been seeping into the SRK star persona—the inability to carve out a new niche for himself in Bollywood’s changing landscape, where Salman and Aamir are now calling the shots. And SRK surely has not been able to reinvent himself with Ra.One. If anything, SFX stunts and SRK add up to a rather odd, displeasing combination.

Cinema cannot be a mere video game shot in 70mm and SFX is not only about harnessing technology, but rather creating magic on screen. Coming on the back of a two-year hiatus, you expected nothing short of magic from King Khan. The man, however, fails to cast a spell.

Bringing Out Their Laundry