One Li'l Piggy In The Bank 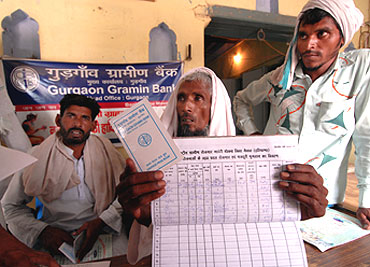 The search for the Holy Grail of inclusive growth, which is to say, getting resources to those who need it the most, without bureaucratic sloth and endemic corruption, has intensified after Elections ’09. Thanks to the political gains from the national rural employment guarantee scheme (NREGS) and the urgency to contain a ballooning subsidy bill, there will soon be an array of schemes to put government money directly into the hands of below-poverty-line (BPL) families. The obvious advantage such schemes can hold—besides the potential for cementing a political constituency among India’s 300 million-plus ‘poorest of the poor’—has intensified the search.

So, will conditional cash transfers yield better results in poverty reduction compared to the present welfare and subsidy schemes? Predictably, there are divergent views on the impact of an incentive provided to the household or individual for fulfilling specific conditions (such as participating in a public works programme, minimum attendance norms for school-going children, shedding gender bias, undergoing job training, and so on). In short, it’s an incentive—be it via cash or bank accounts or vouchers or smart cards—that directly reaches the poor, and is used (theoretically, at least) to get them benefits.

India’s shift towards a demand-driven conditional cash transfer mode of poverty reduction is not new, argues Montek Singh Ahluwalia. "In the last few years, in a sporadic way there has been a transformation of many anti-poverty schemes to social security schemes," says the man tipped to continue as deputy chairman of the Planning Commission. The NREGS, health insurance for the unorganised sector including migratory labour, cash instalments to build a house—all signify the shift.

"We have cash transfers in mind in four different forms, supplementing what the BPL families are already receiving. It’s not just PDS, but more than that," says Santosh Mehrotra, senior consultant, Planning Commission, who is finalising the draft proposal on cash transfers. He does go on to add that these schemes are contingent on universalising bank or post office accounts. Thanks to NREGS, massive progress has been made since April last year when payments through banks or post offices began. It’s another matter that 99 per cent of the NREGS account-holders maintain zero bank balance, states Omprakash Badgujar of the Gurgaon Gramin Bank branch in Malab village of Haryana.

If Mehrotra’s schemes get the nod, banks and BPL families can look forward to more cash flow into their accounts. For the first five years, BPL families will be given Rs 500 per month. However, only half of this income will be available to the family for use as they like. The rest will remain in the bank account to be built as a corpus and will act as collateral for loans, and in case of dire need, for repayment of bank loans. The second is a healthcare scheme: Rs 500 monthly payment to pregnant women three months prior to delivery and Rs 1,000 per month post-delivery for three months. This scheme would seek to encourage better mother- and child-care through institutional delivery, immunisation and nutrition supplements. 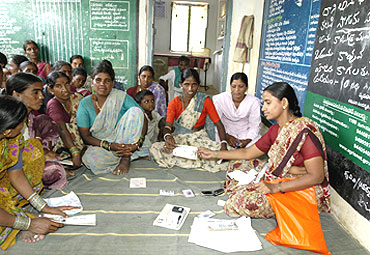 The third scheme is supposed to help youth undertake skill development courses at itis or any other institute or even learn the family trade. Finally, the fourth scheme envisages providing cash or coupons to BPL families to buy foodgrains from any place of their choice. Clearly, the state has ambitious plans to funnel cash directly into the hands of the poor. Is it really a more efficient delivery system? Past experience suggests that it is. Does it fulfil the chosen objectives? Well, there are divergent views here.

Globally, the history of change from poverty programmes to demand-driven conditional cash transfer is traced to Mexico’s financial crisis in 1994. It was widely felt that the political perception of well-being could be achieved by replacing most of the existing subsidy schemes, which were only feeding leakages, with the introduction of direct cash transfer, which had a reasonable success. Other countries that have used the transfer route include Brazil, Bangladesh, Russia and South Africa.

Recent studies of CCT programmes in over 70 countries by the World Bank and undp India has revealed that provided there is social infrastructure support and transparency, the cash or coupon (lately smart card) delivery mode can be more cost-effective. Unlike the current scenario where 85 per cent of allocated funds is being eaten up by the administrative machinery or corruption, CCT delivery cost averages 6-12 per cent. That’s a huge potential saving considering India is among a dozen countries spending over 2 per cent of its GDP on social security and subsidy schemes.

Seen in this light, the Telugu Desam Party’s election promise of offering Rs 1,000 per month to BPL families does not seem out of tune with proponents of demand-driven social security for the poor. Yet, despite the cost advantage, there are continuing apprehensions about corruption. As Geeta Chatte of Khewda village of Haryana complained to Outlook, "We are continuing to get less than our dues" for NREGS work. This perception is widespread. Explains Pradeep S. Mehta of CUTS International, "Through conditional cash transfer, the subsidy will be more effective as against indirect subsidy with its high level of seepage. That is not to say leakage will not happen in direct cash transfer."

However, Outlook’s interactions with NREGS workers revealed that, despite some leakage, there is more satisfaction than grouse. Sure, travel and paperwork is cumbersome for poor people and time-consuming for bankers. But the picture is in contrast to many of the current subsidy schemes. Official studies show that currently hardly 27 paise out of Re 1 spent by the government on providing subsidised food to the poor reaches the target families. As Indian Oil chairman Sartak Behuria points out, over 35 per cent of the 6-7 million tonnes of subsidised kerosene sold gets diverted for adulteration of transport fuel.

Professor Bhaskar Dutta of Warwick University, who has worked in the field of targeted food subsidies, stresses that there is no perfect delivery method as there are potential problems with every conceivable scheme. On the positive side, "provided BPL families have been identified (and that itself is a huge assumption), conditional cash transfer does ensure that the cash reaches the intended beneficiaries. The downside is that the cash may be blown up in buying alcohol instead of food," says Dutta.

Also, development consultant Shagun Mehrotra feels that despite the many advantages of cutting out bureaucratic hurdles and corruption, CCT does not address "ground issues of inequality and exclusion which are barriers to many BPL families accessing healthcare and education". Apart from social exclusion, currently many of the BPL families are being kept away from various schemes due to faulty identification and corruption. Later this year, a fresh national BPL census hopes to plug many of the anomalies through greater use of technology. Hopefully, we will have computers—and not vested interests—deciding the BPL beneficiaries for different schemes.

The Delhi government, for one, has already started the BPL census process prior to issuing smart cards. Having studied various examples in the country and overseas, Delhi CM Sheila Dikshit feels rules should be relaxed to reach out to people as "a five per cent corruption rate is tolerable if it helps more people access our welfare and social security schemes". For a start, Dikshit reveals, "We’re mulling offering cash to BPL families to buy whatever they require from PDS shops to reduce corruption."

On another front, some experts are not too sure whether phasing out or diluting PDS will work. "Politically, it is not possible to stop procurement (of foodgrains from farmers). Once procured, the government will have to offer foodgrains through PDS," says Biraj Patnaik, part of the expert group studying various aspects of CCT. Moreover, experiments by the central government and some states like AP and Punjab for improving delivery through smart cards and food coupons are yet to yield conclusive results.

Given the enormous challenge to reduce poverty, improve healthcare and quality of education, experts feel it is best to take small steps forward. Assures Montek, "Once it is there and working, you can always introduce it a little bit in parallel (to subsidy schemes) and then switch resources if you find conditional cash transfer is working better." Ultimately, its success will depend on two age-old truisms: governance and transparency.

By Lola Nayar with Venugopal Pillai in Hyderabad