One Leg In A Gunny Sack

One tastes the entrails of a seething Mumbai slum in this vivid, visceral account 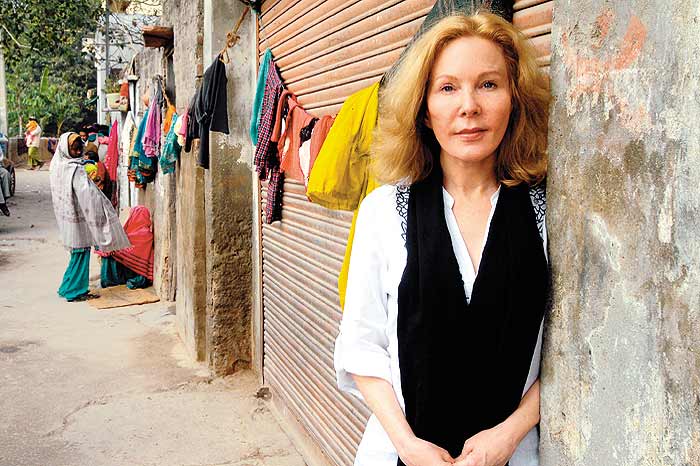 Behind The Beautiful Forevers: Life, Death And Hope In A Mumbai Undercity
By Katherine Boo
Hamish Hamilton/Penguin | Pages: 280 | Rs. 499

The city formerly known as Bombay has Dickensian qualities. Minutes away from some of the most expensive real estate in the world, you can find tubercular families living in concrete drainage pipes. It is cramped, fast and glamorous, and it has Bollywood—offering boundless dreams. The scale of Mumbai’s divisions and its atmosphere of ambition may explain why, in recent years, the city has been served by nonfiction of the highest quality: Meenal Baghel’s Capote-style reconstruction of a sensational murder, Death in Mumbai; Sonia Faleiro’s eye-popping study of bar dancers, Beautiful Thing; and Suketu Mehta’s blockbuster, Maximum City.

Katherine Boo comes to India with str­ong credentials. A Pulitzer Prize-winn­ing American journalist, she has a reputation for reporting the lives of the disa­d­­vantaged in extraordinary detail, without sentimentality. Take this splendid ope­­ning sentence of a piece she published in 2003 in The New Yorker, about a state-sponsored scheme to enc­ourage poor people to marry: “One July morning last year in Oklahoma City, in a public-housing project named Sooner Haven, twenty-two-year-old Kim Henderson pulled a pair of low-rider jeans over a high-rising gold lame thong and declared herself ready for church.” You can see that Boo is a silently present force. Her technique is to hang around in des­perate places for months, even years, until she becomes a fly on the wall, a rat on the floor. And in Ann­a­wadi, a slum on the fringes of Mumbai’s airport, life is so frantic that its inhabitants have other things to worry about than a tenacious foreign reporter and her interpre­ter.

The result is Behind the Beautiful Forevers, a remarkable book which puts a closer focus on the realities of being poor in urban India than anything I have read. It depicts the challenges and it eschews theorising, to the point where Boo’s narrative can at times seem unframed by any larger view. Boo uses written research, too, requested diligently under the 2005 Right to Information Act, so that the book feels reliable: when a scene is described, you feel sure she has pinned down each disputed fact, even when the text reads like something out of a dystopian novel.

Its guiding premise is that gaming the system is the only means of survival in a place like Annawadi. “For the poor of a country where corruption thieved a great deal of opportunity,” she writes, “corruption was one of the genuine opportunities that remained.” To echo a character in V.S. Naipaul’s novel A Bend in the River: “It isn’t that there’s no right and wrong here. There’s no right.” This is about as far as you can get from Patrick Swayze in the film City of Joy.

Thrust into this world is Abdul, a cautious, determined boy with a talent for finding trash: cans, cardboard, scr­ews, foil, different types of plastic, anything that can be sorted and sold. His life unr­avels when he is arrested for involv­em­ent in the murder of a neighbour, known as One Leg, a woman who had pre­viously drowned her daughter in a bucket.

Abdul is innocent; One Leg had poured kerosene over her own head in a rage. Her immolation becomes the book’s moral pivot. For the aspiring Asha, a woman with large breasts and an alcoholic husband, who is adept at stealing money from anti-poverty schemes and using sex to break her way into the middle class, the incident presents an opportunity to make money by brokering a settlement between Abdul and One Leg’s families. Once the state becomes involved, police, government officials and doctors also find ways to extract profit from the episode.

Vivid personalities populate Behind the Beautiful Forevers. Try the slumlord Robert Pires, who owns nine horses, “two of which he’d painted with stripes to look like zeb­ras,” so he can hire them out for child­ren’s parties.

Boo’s constant theme is that the poor face the same concerns as us, but feel them more starkly as their lives are so unstable.

Or Asha’s gentle daughter Manju, who studies English literature and is on her way to becoming a college graduate, heading for a different life to those around her. “The plot of this novel Mrs Dalloway made no sense whatsoever to Manju.” We see her with an assignment on Congreve, the Restoration playwright, learning alien information by rote: “‘Mirabell — beau. Millament — gallant. Mr Fainall — cuckold.’ She murmured bits of plot summary as she app­lied the stone to her mother’s large pan­ties, her father’s small shirt.” When Asha organises an event at a temple to impress a local politician (who fails to show), a beautiful eunuch appears and does a high-speed spinning dance, before answering questions on behalf of a goddess who has taken over his body.

To draw a picture of the suffocating pre­ssure of living in Anna­wadi, the book concentrates on minute details, and in an uncanny way makes us see thr­ough the eyes of others, even to think their tho­ughts. We can almost feel what it must be like to be a small boy dra­gging a piece of stolen iron wrapped in a bedsheet through a swamp in the dark. We know why the same boy, after discov­er­ing “a jamun-fruit tree where parrots nes­ted,” decides not to catch the birds but to encourage others to leave them alone. “Sunil listened for their squ­a­wks when he got up each morning, to make sure they hadn’t been abducted in the night.”

We are shown the emotions of Abdul, released from prison and trying to start over with his trash collecting under the boiling April sun. A teacher had inspired him while he was in Arthur Road Jail: “He wanted to be better than what he was made of,” writes Boo. “In Mumbai’s dirty water, he wanted to be ice. He wan­­ted to have ideals. For self-interested reasons, one of the ideals he most wanted to have was a belief in the possibility of justice. It wasn’t easy to believe, just now.”

Boo appears to have no ideological axe to grind: for her, the political is perso­nal. “In the age of globalisation,” she wri­tes, “hope is not a fiction. Extreme pov­erty is being alleviated gradually, unevenly, nonetheless significantly.” But elsewhere she relies on large factoids, referring for instance to “roug­hly one hundred million Indians freed from poverty since 1991”—an underestimate which relies on a rather arbitrary definition of poverty—and argues that “glo­bal market capitalism” is responsible for making poor people compete “ferociously with one ano­ther for spoils”. But the poor have always fought each other viciously for spoils, because they have no alternative. Displ­acement and disposses­sion are run­ning features of Indian history, with col­umns of the defeated being pushed from place to place by a victorious ruler; descendants of enslaved Mar­athas can be found today in Balo­chistan, still in servitude.

Although lavish airport hotels and the roar of jets are present in Behind The Beautiful Forevers, this is not ultimately a book about the impact of globalisation; it is a book about close human interaction. There were grotesque slums like Annawadi near Bombay airport in the 1980s, and their cyclical destruction was already a pastime of ambitious politicians. Before phrases like “economic liberalisation” entered India’s public conversation, or at least its English-language press, starved boys would try to prostitute themselves to tourists on the road outside this airport terminus. The land looked more rural then, like dirty countryside, and the people who lived there were poorer and less well nourished than they are today: Mumbai’s slums are bad now, but they were worse then.

Although at certain points Behind The Beautiful Forevers may fall short in terms of context and history, it works in close-up—so close it feels like a punch in the stomach. A boy loses his hand while putting plastic in a shredder, and apologises immediately to the owner for making a mess. Scavengers find their cuts become infected, and fill with maggots. Babies are bitten on the head by rats. Meena, a girl who seems to have a promising future, swallows rat poison. At the hospital doctors extracted five thousand rupees from her parents in the name of “imported injections”. “On the sixth day of Navratri,” Boo writes, “Meena was dead.”

This is a work of unparalleled close observation. If there is a common theme to everything Boo writes, it may be that the poor face the same concerns as everyone else does—difficult neighbours, marital infidelity, bosses who don’t keep their promises—but experience them much more starkly because their lives are so unstable. A bulldozer might knock down their shack. A flood might sweep them away. Almost nobody in Annawadi has a permanent job. A family member may be arrested arbitrarily, requiring the payment of a huge bribe. A money-making child might catch a disease while sorting garbage, and die. Like Pip in Great Expectations or Jo in Bleak House, a boy like Abdul is hoping against hope for something good to happen.

Patrick French is the author of India: A Portrait (Penguin)

Go To The Snow-Laden Slopes