New-age realities are prompting urban Indians to settle for one kid. Raising superbrats? Not necessarily, they reason. 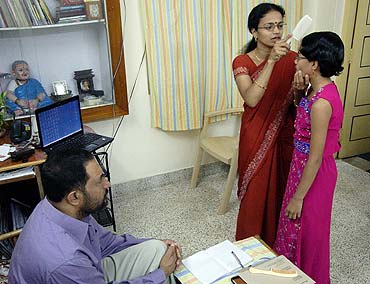 DISK (double income, single kid) couples are on the rise among the educated urban middle class. So what makes them stop at one?

Gains In Solitude ...The Risk Factors

Call it the rediscovered power of one. Or the last surviving instance of austerity in a world where profligacy is often the measure of prosperity. Urban middle-class parents in India, who probably earn more and have more than their own parents did, are opting to have less—children, that is. "Ek sher jaisa bachcha (a lion-like kid)," to be specific. Or as the French put it, an enfant unique. The dinks are passe these days; Hum Do Hamare Do went out with Chhaya Geet. These days, it is the DISK (double income, single kid) couples that rule.

Of course, Indians are not exactly heading the way of China, which enforced a one-child-only policy some decades ago as a population control measure, and has often been charged with creating "a generation of superbrats". The majority of Indian middle class families still follow the two-child norm. But paediatricians, gynaecologists and school counsellors in Delhi, Mumbai and Bangalore that Outlook spoke to say that—though there is still no hard data on this—the number of couples choosing to have just one child is fast increasing year by year, whereas even a decade ago such couples were the exception. 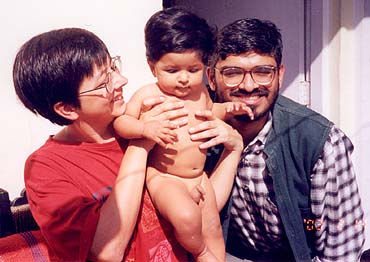 Delhi publisher Anita Roy and her partner Naga with Roshan. The kid, as Anita notes, has "so many 'only sons' in the neighbourhood to play with."

Stereotypes abound about the personality problems of only children—that they are selfish and spoilt, expect to be the centre of everyone's attention, are over-sensitive, and over-protected by their parents. But child counsellors, as well as parents who have made the choice to have just one child, dismiss such generalisations. Anita Roy, Delhi-based editor and mother of a four-year-old boy, Roshan, isn't unaware of the downside of having only one child. "There's much truth in the saying that you have your first kid for yourself, and your second for the first. My partner and I have two brothers each, and are delighted that our parents didn't stop at one. So we do have moments of guilt or doubt about whether we are depriving our kid by not having any more—there's no relationship quite like that with a sibling." And it's not just that. Roy notes, "as our own parents get older, there's a sense that the responsibility for looking after them doesn't rest on just one pair of shoulders. An only child faces the prospect of caring for ageing and ailing parents alone, with no siblings to share the burden."

Having said that, though, Roy is confident she made the right choice by remaining a mother of one. "I am pretty sure that we end up playing much more with our kid than other multi-kid parents do," she says. "And Roshan has no time to miss the company of siblings: There are three 'only sons' in his neighbourhood to play with."

There are many reasons behind the spurt in DISK families. "For working women," says Bangalore educationist Dr Manju Sapru, "it's easier to stop at one. They just don't have the time to take care of more than one child." She adds that the only-child trend is also partly to do with economics: "Many parents feel that having more than one takes away more than they can give." Dr Nandita Palshetkar, consulting gynaecologist and obstetrician, feels that it's also partly because "there are many more nuclear families these days, and therefore there is no back-up system at home" to help with childcare.

But what about the single-minded preoccupation that most Indians seem to have about having a son? "Most people don't come to me wanting a son," says Palshetkar, "that is something only the upper or lower classes do, the educated middle class doesn't. "

What's more, career concerns are compelling working women to postpone marriage and parenting until they are well into their mid-30s. With the biological clock ticking, that often leaves only enough time to bear and raise one child. Palshetkar, who routinely advises women in their mid- to late thirties having their first child, says that many of them decide to have just one. "In five years, it will be even worse," she says, with the trend towards later marriage and child-bearing growing year by year.

Manisha Tikekar, who teaches political science at Mumbai University, remembers the early '70s, when she and her husband made the conscious decision to have only one child. "In those days, it was rare," she recalls, "but I wanted to go into research, and that would have been hard to manage with a second child. With husband and wife both working, there is a desire to give the best possible to the one child you have."

By the time social worker Varsha Tawde made the same decision some 25 years later, one-child couples were a lot more common. Varsha had her daughter Avnee late, and although she did toy with the idea of adopting a second child, she dropped it because she was not convinced that Avnee was missing out on anything essential. Is Avnee lonelier for that decision? Quite the contrary, laughs Tawde, saying that Avnee is confident, secure and well-adjusted, with lots of friends. "I guess that if you don't have brothers and sisters to keep you occupied at home, the impulse to find other kids to play with is perhaps that much stronger," notes Roy. The absence of rivals/siblings also makes only children bond better with their parents, says Tawade. "My daughter is my friend, because we rely so strongly on each other for companionship. We're like a unit."

Only children tend to be "more focused and goal-oriented," observes Dr Sapru, "since their parents concentrate more on them. Children in larger families tend to find their own path." And they are also more independent and self-sufficient because, as Palshetkar puts it, "they are often at home alone while their parents are out working." Naturally, they learn to entertain themselves, and can happily spend hours in solitary pursuits, like reading, or drawing and painting.

"Only children tend to grow up faster than their peers," observes Tikekar, "because they spend so much time with adults, and interact a lot with their parents' friends." This is a view endorsed by Dr Sapru. She, however, adds that "the negative side is that only children tend to become very sensitive, since they're protected by their parents, and find it difficult to handle outside people saying things to them."

Bangalore-based adolescent counsellor Monadeepa Chatterjee finds, moreover, that only children are sometimes pushed to rebel. "Parents with one child tend to be over-involved with the child's life, and so at the slightest opportunity these children tend to break out—in order to individuate, and establish their autonomy," she says. "Children with siblings tend to be less uptight."

And being a single child also means that you have to bear the brunt of your parents' expectations alone. "Sometimes these expectations can be rather unrealistic—there's pressure mounting on the child to fulfil all their parents' dreams," says Chatterjee.

But DISK couples, having taken their decision, tend not to agonise over it—the demands of dual careers, the rising costs of urban living and of quality education for children seem to have clinched the issue for more and more of them. So it appears that more and more only children will grow up swinging between the disappointment of not having a sibling, and being grateful to their parents for letting them have all the caring—without sharing.