One Day In Wonderland

Forget the critics, the ODI still adds punch to the game 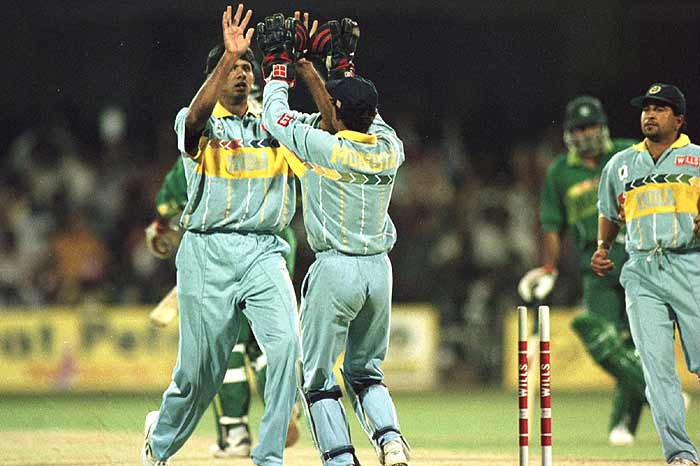 The one-day international is much maligned, often dubbed these days as boring, predictable, contrived, irrelevant, an unnecessary adjunct to a bright future full of Twenty20 international leagues and the occasional Test match. Pithily, it is said there are just too many ODIs, and their scripts are quite familiar to the audience. But is the litany of complaints justified? Not really, for the ODI, far from being moribund, still packs a punch, and the 10th World Cup, like the others before it, is the best showcase for the format.

It took a while to dispel the charges levelled against the ODI in its infancy—that it was too short, destructive of batting skills, contemptuous of bowlers; that it wasn’t ‘real cricket’ but ‘festival cricket’. Fans gradually realised the ODI format had cricketing value: batsmen could be called upon to build innings, bowlers could be match-winners and not just by restricting runs, and fielders were driven to new heights of skill and athleticism. Quite simply, you could see some very good cricket in an ODI, and we often did.

A good ODI can approach a perfect compromise between a Test match and a T20. It offers some of the complexities of the longer game (not all), and the pyrotechnics and guaranteed result of the shortest format. It’s a day-long entertainment package, potentially offering a perfect lazy day of watching—the engaged spectator starts the game at a decent time in the morning, and then whiles away the day, watching a drama develop.

And when things go right, ODIs can be real crackers. The ideal ODI, speaking from the perspective of the partial fan, is one where his team bats first, and fights its way to a challenging score, perhaps after mastering early challenges like a slightly bowler-friendly wicket, a keen bowling attack, or the fall of some early wickets. In reply, the opposition gets close to the target score but falls short at the end. Every wicket of theirs is an occasion for delight; every batting flourish of theirs a little dagger of fear thurst into the heart. This template works the best because taking wickets to win a game is more satisfying than chasing down a total. (The alternative, a difficult, yet successful high-scoring run chase like the South Africa-Australia ‘434’ game, or India’s win against England in the 2002 NatWest final at Lord’s, runs a close second. It’s not as satisfying for the partial fan has to endure the opposition racking up a big score first).

Among the best examples of this thesis of mine was the 1996 World Cup quarter-final match between India and Pakistan at Bangalore. In that game, India batted first, and fought and scrapped their way against a challenging Pakistani attack in an absolute cauldron, a hothouse of a stadium. Watching it at night, on the US East Coast, some 10,000 miles away, I was riveted—sleep, fatigue and alcohol were all mastered by the tension generated by this game. The Indian batting flared at the end, thanks to Ajay Jadeja’s assault on Waqar Younis, and Pakistan’s target wasn’t a simple one. The Pakistani reply had everything: initial brilliance, stutters, emotional drama via the Aamir Sohail-Venkatesh Prasad clash, and then finally, the submission to the Indian bowlers.

The 1996 India-Pakistan encounter, like other close ODIs over the years, offered the rollercoaster of a classic Test, in 50 overs. It did not replace a Test match; nothing will ever do that. But it bravely offered a day-long substitute via the pretension of a pitched battle, with minute swings of momentum in a few overs comparable to those that take place in a session of Test cricket. It provided a drawn-out encounter, replete with uncertainty, suspense and tension.

All of this would have been impossible without the dreaded executioner’s chop of a knockout from the tournament.True, not every game can be a World Cup quarter-final. But World Cup ODIs can be more relevant, more meaningful than they are in the endless bilateral and triangular series that are played all year round. The World Cup can ensure that importance is attached to every game—you lose a match, you run the risk of having to return home—though in its more recent editions the number of painfully non-crucial encounters have increased. Indeed, the central complaint of cricket fans about the World Cup is precisely that the inclusion of inconsequential teams has diminished the pleasure of watching crucial cricket encounters. Reform is needed here, and quickly, if the Cup is not to lose its relevance.

The World Cup can offer, when the going is good, everything one would want in a cricket game: an occasion, an involved crowd deeply invested in the result. I think among the highlights of the 1975 and 1979 tournaments were the errant, passionate West Indian supporters; the central crime of the 2007 World Cup was the disrespect shown to the spectator. Finally, it’s a format with enough space for the greats to display their wares. The T20 format does not allow our stars to perform on stage for long enough.

In the 1996 Bangalore quarter-final, everything came together in a perfect blend. Yes, such matches are rare. But so are humdinger Test matches and exciting T20s. We watch, just like in every other sphere of entertainment, a lot of dross, so that we may stumble upon the genuine gem. Indeed, much of the criticism currently levelled against the ODI wouldn’t be made if the game was not over-scheduled, and was instead served as an appetiser for Test cricket while retained as the format for a tournament involving the world’s best teams.

The ODI is not a replacement for Test cricket or T20; it has its own unique set of offerings, the most important of which is that within a limited-overs format, it showcases the gradual development of a cricketing battle. When that battle takes place on the cricket world’s most important stage, every cricket fan can find something to savour and cherish.

Samir Chopra teaches philosophy at the City University of New York, and blogs for espnCricinfo.com