Kashmir's tourism sector is the target, with local boys as pawns 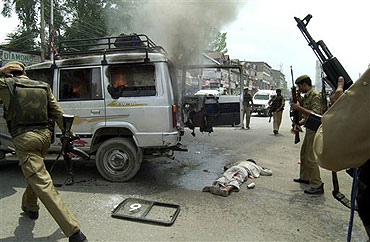 outlookindia.com
-0001-11-30T00:00:00+0553
Jammu & Kashmir chief minister Ghulam Nabi Azad has had a torrid first summer in Srinagar. Everyone in the Valley knows that militancy-linked violence is cyclic, but the new pattern of terror—targeting trade and tourism—is something Kashmir hasn't seen in recent years. Militant strikes had till now been largely directed at the security forces. But the five grenade attacks in the heart of Srinagar (July 11) which left eight dead, including six tourists from West Bengal, and injured 42 is a clear indication that the militants have zeroed in on new soft targets.

Also, the attacks occurred on the same day as the Mumbai serial blasts, so there's also a line of investigation to see if the two are linked. As of now, there is no specific intelligence to confirm this but the J&K police do say that terror networks have linked up in the broad sense in the past.

What is clear is that the militants are bent on hitting the average Kashmiri where it hurts the most. "It seems they have now decided to break the backbone of Kashmir's economy—tourism," a senior J&K minister told Outlook. And he's not alone, this is a line of thought being much debate in the state today. And with good reason. A day after the Srinagar blasts, there were grenade attacks at five locations in Gulmarg, a popular holiday spot, which injured seven people. Panic spread among the tourists and they are now exiting Kashmir in hordes. Reports say inflows has also come down by almost 50 per cent.

Hotel owners say bookings have been cancelled and reports say tourists already in Srinagar and other other parts of the Valley are cutting short their stay. The blasts in Gulmarg came as a surprise for the area has not been a target of militant strikes in the last 15 years. "The message from the militants is that Kashmir is no longer a hospitable and safe place...visitors must stay off," a hotel owner told Outlook. At the Dal Lake, the houseboat owners look grim. Cancellations have again given rise to fears that they may be forced out of business if the air vitiates further.

The grenade attacks have also seen a new cause of worry for the police—the use of locals to carry out strikes. "The militants have started to hire young men with no criminal or militancy backgrounds to lob the grenades. These are unidentified youth...it's very difficult to track them down since they have no criminal record," confesses a senior J&K police official. The buzz in Srinagar is that the going rate for lobbing a grenade is anything between Rs 200-Rs 500. State IGP S.M. Sahay even confessed at a press conference, "We have so far failed to check the trend."

It's an intelligent move, with modules involving local youth, the actual militants stay in the background and invisible. All they have to do is plan attacks from their hideouts in the upper reaches and convey the instructions to the "boys" in the Valley. But the police are getting into the act too. They are now offering cash awards to get information on the militant links of local youth. An alarming trend is that the militant base in Srinagar seems to be growing by the day. And it's happening after a gap of almost eight years, local youth again being motivated to join the separatists.

For the Ghulam Nabi Azad government, it's back to the drawing table on strategy to tackle militancy. The state is hurting and at a time when grand plans were being drawn up to hardsell the Valley as a tourist destination to foreign and domestic visitors. The government was also considering tie-ups with private players in the hospitality industry to develop Gulmarg as a major ski resort. Now investors may have second thoughts. It doesn't augur well for the state.