Once Upon The River Love

For this godman, the road to salvation is through cleanliness. Kali Bein river has already seen how. 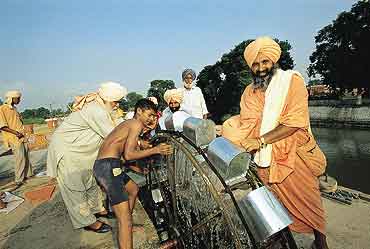 outlookindia.com
-0001-11-30T00:00:00+05:53
At a time when godmen come dime a dozen in rural Punjab, Sant Balbir Singh Seechewal stands out for doing things differently. Cleanliness, his teachers had taught him at the village school, is next to godliness. Today he’s teaching his followers the path to salvation—by cleaning and mending the sewage-ridden, weed-choked rivulet Kali Bein.

Today Kali Bein, sacred to the Sikhs for its association with Guru Nanak Dev, flows clean and proud. But it was not like this a couple of years ago. The stream emerges from a spring near Hoshiarpur, flows through Kapurthala and Sultanpur Lodi, to meet the Sutlej near Harike Pattan. On the way, it gathers industrial waste and sewage from all the towns it meanders through. The Bein was choked with weeds, particularly water hyacinth, to such an extent that at Sultanpur Lodi the water wasn’t even visible.

Balbir Singh, a college dropout from Sultanpur Lodi, became a self-proclaimed godman after he took charge of his guru’s dwellings in his native village Seechewal. From the beginning, his preachings stressed on the tenets of the holy Guru Granth Sahib. "What Sikhism are we talking about if our holy rivers are full of sewage today?" asks the Sant. "Can God survive amidst such filth and dirt?"

Stopping the massive flow of sewage into the Bein was not an easy task. The first to face the Sant’s ire was a pwd rest house in Sultanpur Lodi. His followers blocked its drain with a block of wood. He employed the same modus operandi on many village houses which were dumping their sewage into the river. He braved the inevitable opposition through counselling and managed to coopt several villages into his plans.

Next on the Sant’s agenda was to clear the weeds. Balbir Singh and his followers first began pulling them out manually, even as sceptical villagers watched from a distance. Gradually the number of his followers grew. Soon villagers joined in the cleaning operation with tractors and mechanical equipment. "Politicians, even officials on whose toes I was stepping, tried to cow me down. Experience has shown me that it is easier to convince simple villagers about what is good for them than these so-called educated ones," says Balbir Singh.

Seeing the crowds which turned up for the Sant’s ‘kar sewa’ (community service) and their determination to clear the river, the authorities had no choice but ensure that the inflow of sewage into the Bein stopped. Singh began with his own Sultanpur Lodi town. The entire open sewage system here, which was the source of many diseases, is today underground and does not empty into the river. Once the weeds were cleared, the Sant began desilting the riverbed. The kilos of sediment dug up thus were continuously piled up along the banks and came in handy to construct ghats on the river banks.

It is almost three years now since work on the Bein began. Besides a relatively free-flowing course now, the Sant’s followers have transformed the 1.5 km-stretch near Sultanpur Lodi into a picnic spot with permanent all-weather roads on both sides.

As the Sant goes about cleaning the river, he is also ensuring that some age-old Punjabi traditions are restored. Like the ‘Nanakshahi bricks’ (ancient bricks used in old havelis and forts in Punjab), which he collects from crumbling old buildings across the state and uses them to construct ‘jhalars’, the traditional way of drawing water from a river with the help of bullocks or camels.

Before the Kali Bein operation, the Sant was better known as the ‘sadkan wale baba’ (road-making baba), for he is also credited with making about 500 km of kutcha link roads in the Lohian, Nakodar and Sultanpur Lodi area. Sant Balbir Singh be contacted at Village Seechewal, Sultanpur Lodi, District Kapurthala, Punjab—144626; Phone: 01821-270263