Once More For The Twice-Born

After years in a limbo, the Brahmins have found a political voice. And every party is eager to hear it. 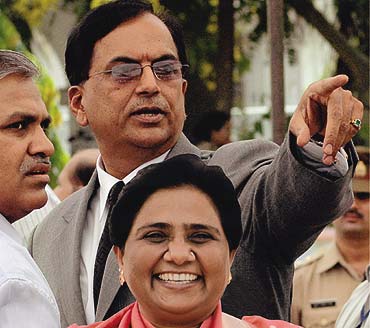 "Given their historic leads in education, the southern brahmins are at the vanguard of the new economy."
Mahesh Rangarajan, Political Analyst

"Today in the villages the perpetrators of atrocities on the poor are the upwardly mobile OBCs."
Dipankar Gupta, Sociologist

"Then, a Brahmin needed courage to crop off his tuft of hair. Today, a brahmin needs courage to keep it."
U.R. Ananthamurthy, Writer

"At last our time has come! Every Brahmin should rejoice at Mayawati’s victory. This is our victory."
A Brahmin shopkeeper celebrating outside the BSP office in Lucknow

Mange Ram Sharma’s living room in Delhi could be a photo gallery of prominent Brahmin leaders of contemporary India. The chairman of the World Brahmin Federation has called upon or been visited by virtually all Brahmins who have made a mark in Indian politics. Former PM Atal Behari Vajpayee, ex-president Shankar Dayal Sharma, V.C. Shukla, Murli Manohar Joshi, Satyavrat Chaturvedi and R. Venkataraman to name just a few. Clearly, the Brahmin network endures.

But all the fabled Brahminical foresight and wisdom has not stopped the marginalisation of the twice-born in the age of Mandal. Sharma, who had once been president of the All Indian Brahmin Mahasabha formed by Pandit Madan Mohan Malviya, has spent the last two decades fighting several cases in the Supreme Court against reservations. Along the way, he has lost faith in the Congress ("The first thing they spoke of was reservations in the private sector and then pursued Arjun Singh’s Mandal II.") and is particularly bitter with the BJP ("We associated Hindutva with Brahmanvaad but they pursued backward caste politics"). But he now believes that Mayawati has turned Mandal on its head. For the first time Brahmins voted tactically. "By honouring the Brahmin she has changed the course of politics," he says. "She has realised that Brahmins may not be able to win an election by themselves but they have the power to defeat."

The headcount of the Brahmin voter may not add up to much. But it is the very notion of the Brahmin supporting and playing a significant role in a party built on a Dalit bloc that has altered political chemistry. Given their traditional leadership role in society, a Brahmin embrace of the Dalit leader could act as a catalyst for other caste groups to join in. Says sociologist Dipankar Gupta: "Today in the villages the major perpetrators of atrocities on the poor are upwardly mobile OBCs. It is not Brahmins alone who have supported Mayawati. The interests and aspirations of all the forward castes including Kayasthas and Baniyas is the same. This is not just about caste, it is also about a commonality of class and economic interests."

The upshot is that across India people who had no time of day for Mayawati a month ago are today delighted with her victory. From the traditional pundit eking out a living on the ghats of Varanasi to the sophisticated members of the new economy in Bangalore, the UP experiment has been welcomed with great enthusiasm by all the forward castes of India. In Lucknow exultant Brahmins distributed sweets to passers-by. "It is our victory too," they pronounced. Others saw real "Ram rajya" emerging from the BSP victory. "After a long time we have been treated with respect. We are back," was the refrain. By getting 51 Brahmins elected on a BSP ticket, Mayawati has in one deft stroke done away with one of the great unwritten rules of post-Mandal politics: that the future of Brahmins and other upper castes in direct electoral politics was circumscribed and they would have to operate behind the scenes.

Few contemporary writers have chronicled Brahmin life as powerfully as U.R. Ananthamurthy in works like Samskara and Ghatashraddha. When he wrote Samskara in the ’70s, in which an orthodox Brahmin priest has an affair with a low-caste woman, he had seen the rural Brahmin as a very powerful figure. But he now says that society has changed dramatically: "In those days a Brahmin needed courage to crop off his tuft of hair. Today, the reverse is true. A Brahmin needs courage to sport a tuft." Besides, he adds that "the Mayawati experiment worked because both the Brahmin and the Dalit don’t possess any land".

Yet in the south, the Brahmin has had decades to evolve and adjust to political marginalisation as the anti-Brahmin movements there took place decades before Mandal. As political analyst Mahesh Rangarajan says, "Given their historic leads in education, the South Indian Brahmins are at the vanguard of the new economy now. The south has produced information technology icons like N.R. Narayana Murthy. Of course, there will be some very poor families but there is a tradition of Brahmin entrepreneurship in Tamil Nadu and Maharashtra."

But in the Hindi belt where the numerical strength of Brahmins is far greater than the south, the Mandal era was particularly traumatic for the community. The north Indian Brahmins too had a lead in education but there were limited economic opportunities. Politics and government services were their best options but here they were increasingly squeezed by reservations. Even as the era of Brahmin political stalwarts like Kamalapati Tripathi came to an end, the economic backwardness of the Hindi belt states led to several social distortions: the emergence of Brahmin dons like Amarmani Tripathi is one such composite effect of social processes. Between the former and latter, a continuing relation to power is the only common factor.

Clearly, political patronage has undergone an inversion in the north. That is why Mayawati’s victory marks a new era in the evolution of Hindi belt politics. The upper castes believe they have an opportunity to return to active politics, if not exactly on the old terms. They will now play a subordinate role to the Dalit leader in UP. It is the old Congress pyramid turned upside down. Dalit affairs writer Chandra Bhan Prasad says that as Mandal peaked there was a natural reaction in society. "Certain unstated things have been happening that are difficult to quantify. As the upper castes got marginalised, the misrule of some OBC leaders also led to the loss of moral authority. The coming together of Dalits and the upper castes was a natural outcome."

Veteran journalist Prabhash Joshi describes the phenomenon as the coming together of the politically alienated to marginalise the middle groupings. But he does not believe the same experiment can succeed to the same extent elsewhere. "There are so many horizontal and vertical divisions in our society. Dalits and Brahmins have different equations in different regions. The number of Brahmins in UP is the largest in the country. And a chunk of them supported the BSP because Mayawati already had a solid Dalit base to begin with."

But the sheer nature of Mayawati’s landslide win is such that it could alter political equations elsewhere. The Congress is worried about losing Dalit support in states like Madhya Pradesh and Rajasthan where assembly elections will be held late next year. Madhya Pradesh, which shares a huge border with UP, could be a low hanging fruit for the BSP. "Mayawati could evolve into a formidable force if she handles her upper caste support intelligently—and Brahmins have thousands of years’ experience in managing statecraft," says Hindi writer Rajendra Yadav.

Mayawati is learning fast too. She has endeared herself to the upper castes by stating that there should also be an economic criterion for reservations. Following her lead, both Manmohan Singh and L.K. Advani have been compelled to make similar statements. The BJP in particular is in a complete state of panic over large-scale desertions from the upper castes.

Take the example of Mahesh Dutt Sharma, an RSS pracharak who is also president of the Akhil Bharatiya Brahmin Mahasabha. His ties to the RSS-BJP do not prevent him from declaring that both the Congress and the BJP have committed a "paap" (sin) by trying to crush the Brahmins through their support for reservations. "No one can run India without Brahmin support," he says. "Don’t forget Chanakya, a Brahmin, propped up Chandragupta Maurya." Does this mean he no longer supports the BJP? "The Brahmins created and pushed the BJP forward and they lost their way in pursuing OBC politics. If the BJP does not change its ways they will sink even deeper."

Certainly, the BJP has realised Brahmins can no longer be taken for granted. There is a buzz in the party headquarters about the need to project a Brahmin leader instead of Rajnath Singh or Advani. But the bulk of the party support comes from OBCs in states like Madhya Pradesh, Gujarat and Rajasthan. To add to the complexity, the RSS continues to be dominated by Brahmins. Indeed, the RSS was created not just to ward off the Islamic peril but also to preserve upper-caste interests. Although the RSS continues to exist in a world of obtuse Hindu theories and some commentators have even praised Mayawati for "uniting Hindus", the crisis of identity for both parivar and party is getting worse by the day.

Caste politics has indeed come full circle. Just when the Brahmin was being considered a non-entity in politics, the community’s importance has been reinforced. If once they represented, if not outright oppression, certainly the subtle but absolute forms of discrimination that the caste system put in practice across the land, today many see Brahmins in a different, unifying phase in India’s political history. Besides Dalits, in a way, Brahmins are after all the only pan-Indian caste.

When India first gained independence and a Constituent Assembly was created, it was controlled by a core group of 20 of whom 13 were Brahmins. The over-representation of Brahmins at that time can be put down to the fact that they had the lead in education. Today Brahmins are happy just to get a small window of opportunity in politics. Their compact with Dalits may have reaped rich dividends in UP. But the sheer numerical strength of OBCs cannot be overlooked in any future projection. What has changed perhaps is that the Brahmins may now find themselves part of the electoral game after an hiatus. Such tactical unity as in Uttar Pradesh may be difficult to replicate elsewhere. But it has at least thrown up a radical new idea.

Blotch On The Maple