An overbearing ally, public image and prospects for 2019: the factors that prompted Nitish to swing saffron this time 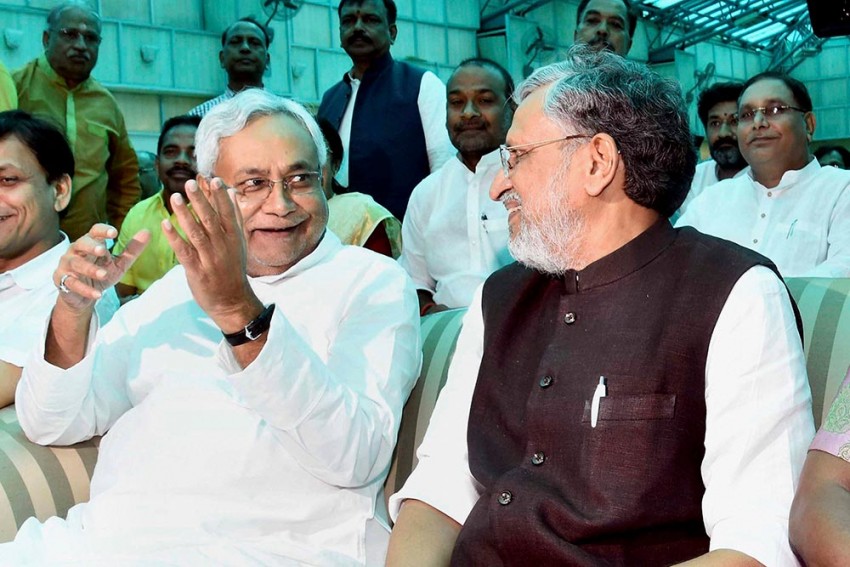 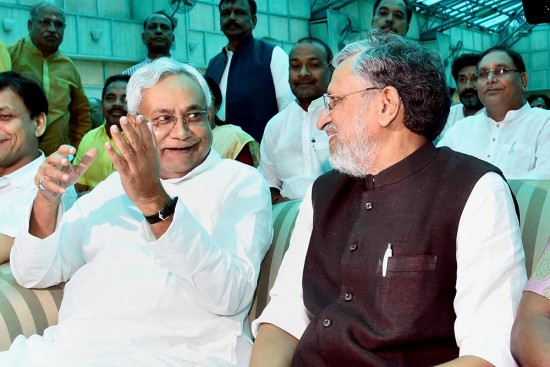 Riding a high horse over probity and morality in public life, Bihar chief minister Nitish Kumar has galloped back into the NDA camp, in a sudden but not-so-unexp­e­c­ted move that has left the anti-Narendra Modi alliance floundering within and outside the state.

The Janata Dal (United) stalwart res­igned in a huff on July 26 after being snubbed by his alliance partner, Ras­htriya Janata Dal president Laloo Pra­sad Yadav, over his demand that ‘tainted’ deputy chief minister Tejashwi Prasad Yadav come clean, only to find his erstwhile ally BJP waiting for him with open arms—and a letter of unconditional support—within hours.

The 66-year-old leader was promptly sworn in as the chief minister for the sixth time (fourth term as an NDA lea­der) the very next day by acting Governor Keshari Nath Tripathi, barely 15 hours after he bid goodbye to the three-party Grand Alliance. This has brought the curtains down on the 20-month-old government that had come into power with a brute majority in the 2015 state assembly elections. Significantly, it also marked a happy ending to the long and curious saga of his acrimonious relations with the prime minister with whom he had shared cold vibes over the past 12 years.

“It had become difficult for me to work under certain circumstances over the past 20 months,” Nitish told the media, explaining his move to quit. “I, therefore, decided to listen to my inner voice and put in my papers.”

However, Nitish’s claim to have res­igned at the prick of conscience has been brushed aside as a great betrayal by both Laloo and Congress vice-president Rahul Gandhi, whose respective parties were part of the coalition government headed by him. “It was a fixed match,” says Laloo. “The entire plot has been scripted by Nitish in cahoots with the BJP and the RSS. Tejashwi toh ek bahana tha, unko BJP-RSS ki godi mein jaana tha (Tejashwi was merely an ­exc­use; Nitish was itching to go back into the lap of BJP-RSS.)”

Laloo says that he always knew Nitish was planning to embrace the BJP again but he did not do anything because of the people of Bihar who had given them a joint mandate against the BJP. “He has betrayed them all,” he says.

Laloo claims that Nitish’s unequivocal support to the PM on policy issues such as demonetisation and GST had offered tell-tale signs of his gameplan. “He also backed the NDA’s candidate in the rec­ent presidential election instead of the Opposition’s nominee,” he says. “I knew he would ultimately play into the hands of communal forces.”

The JD(U), however, trashes the cha­rges. “Nitish’s stand on corruption has been well-known to everybody, inc­l­u­ding Laloo, over the years,” says party spokesman Neeraj Kumar. “The chief minister has always pursued a policy of zero tolerance on crime and corruption. He has never compromised on these iss­ues ever since he came to power 12 years ago. When we ­entered into an alliance with the RJD, we were of course aware of the fact that Laloo has been convicted in the fodder scam and he also knew what kind of stand Nitish has had on crime and corruption.”

The JD(U) leader claims that Laloo was extremely supportive of the state government when it had initiated action against RJD leaders Raj Ballabh Yadav (who faces rape charges) and jailed former MP Mohd Shahabuddin in different criminal cases. “At that time Laloo had said that the law is taking its course, but the moment someone from his own fam-ily got implicated in a corruption scandal, he took a U-turn,” he adds. 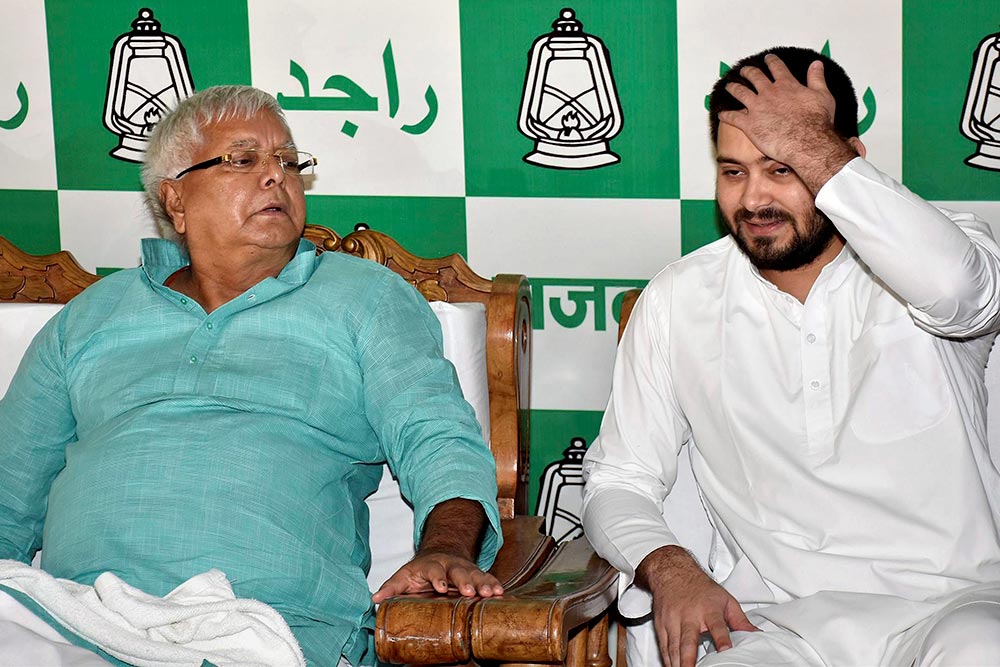 Photograph by PTI
“Trouble started brewing soon after the formation of the government. And corruption charges against Tejashwi pushed them to a breaking point.”

Dismissing the charge that Nitish had started mending fences with the BJP in recent months, Neeraj says that the chief minister had in fact chosen to res­ign as the face of the grand alliance but decided to stake claim to form another government only after the BJP extended support on Wednesday.

Analysts, however, believe that the scr­ipt for Nitish’s reunion with the BJP had been written over a period of a few months. Patna-based political commentator Nawal Kishore Choudhary says that Nitish was not at all comfortable within the alliance because of Laloo’s overbearing attitude “Nitish does not like to play second fiddle to anybody. The BJP was never a dominating ally during their previous alliance and Sushil Modi was always an accommodating partner, but Laloo was different, he was too dem­anding right from the word go, which created fissures between them,” he says. “Trouble started brewing soon after the formation of the government. Corruption charges against Tejashwi only pushed them to a breaking point.”

Choudhary says that Nitish’s act may have been devoid of principles or mor­ality but it has ended the days of political uncertainty in Bihar. “Nonetheless, his decision to join hands with the BJP has dealt a big blow to the larger cause of the Opposition in its fight against communal forces. It is a great loss of an idea and an experiment that had wor­ked so well in the state.”

Choudhary, who calls Nitish a master political craftsman, believes he may have sensed that the Opposition will have no chance to succeed against Modi in the 2019 elections. “The Tejashwi episode only provided him with an exc­use to jump on to the BJP bandwagon,” he says.  “But it will be interesting to see how the BJP treats him in future.”

Whatever be the real reason, political observers believe Nitish has chosen to let go of his long-standing reservations over accepting Modi as his leader. Four years ago, he had snapped his 17-year-long ties with the BJP ahead of the saffron party’s decision to anoint the Gujarat leader as its prime ministerial candidate for the 2014 Lok Sabha polls. He subsequently led the JD(U)-RJD-Congress alliance to a historic win in the 2015 assembly elections and was being seen as a potential prime ministerial candidate of the united Opposition for the 2019 general elections.

But back home in Bihar, the rift bet­ween Nitish and Laloo started coming to the fore long before the Tejashwi episode; while the JD(U) leaders ­inv­ariably accused Laloo of interfering in day-to-day governance, the RJD camp hit back by charging the CM with never consulting his major partner. “Even on a major issue like prohibition, we were not consulted,” says an RJD leader. “The CM did not believe in following a common minimum progra­mme for the coalition government, as is the norm everywhere.”

Nitish kept hoping that Tejashwi would either quit or come clean on the charges for the sake of the grand alliance, but none of that happened.

The grand alliance juggernaut finally came to a screeching halt when Sushil Modi unleashed a litany of corruption charges not only against Tejashwi but also against Laloo, Rabri and several of their children. At the receiving end of the Opposition’s salvos for not sacking Tejashwi, Nitish finally advised his deputy to explain his position on the allegations but that too proved futile.

In the few days preceding his resignation, Nitish kept hoping against hope that Tejashwi would either quit on his own or come clean on the charges for the sake of the grand alliance, but none of that happened. Tejashwi stuck to his guns, calling the raids and the FIR acts of political vendetta engineered by none other than PM Modi and BJP president Amit Shah. Laloo also ruled out the possibility of Tejashwi’s resignation, leaving Nitish with no alternative but to opt out of the alliance and explore an easily available option in the once-­familiar saffron territory “to serve the people of Bihar” one more time.

Bowl Him A Chinaman