It may not be a return to 'Hindi-Chini bhai bhai', but Li Peng's visit could ease strained relations 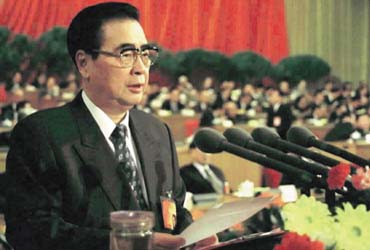 outlookindia.com
-0001-11-30T00:00:00+0553
"The Chinese strategic culture remains what it has always been: wedded to domination, not so much through occupation of the (real or potential) adversary's territory as through a psychological subjugation of mind, an emasculation of the adversary's response options. India, therefore, needs to pose to itself some unsettling questions."

IN June 1999, the same year he was so openly suspicious of the Chinese, the foreign minister was in Beijing, declaring repeatedly that India and China were not a threat to each other. What the "unsettling questions" India needed to pose to itself remained conjectures. Singh's appeasement of the Chinese amounted to an extraordinary diplomatic U-turn.

His contrition paved the way for extending an invitation to Li Peng, chairman of the standing committee of the National People's Congress of China, to visit India this week, when he will call, among others, on the President, the Prime Minister, the Vice-President and Speaker of the Lok Sabha. Li's seemingly innocuous-sounding designation deflects the fact that he is the second-most important political personage in China, after President Jiang Zemin and ranked before Premier Zhu Rongji.

Li's visit is an attempt to stabilise the bilateral relationship between the two Asian giants, after India's Pokhran adventure upset the status quo in the region. Although there has never been an honest appraisal of China, Li arrives at a time when four issues occupy centrestage: the quality of China's relationship with Pakistan, especially its cooperation in nuclear and defence fields; the telling lack of a clear Chinese denunciation of cross-border terrorism; the unsettled border question; and the dumping of Chinese goods in India.

The Chinese have made it clear that the onus is on India to repair ties. This is in contrast to the special relationship China has with Pakistan. In April 1999, after India tested the Agni, Li had declared: "China and Pakistan enjoy a friendship that has stood the test of time."

That China was weighing in for Islamabad was obvious when Chinese spokesman Zhu Bangzao said in June 1998 that "the present situation in South Asia was caused solely by India", and for good measure added that Pakistan's nuclear tests were conducted as "a reaction to India's intimidation". Defence Minister George Fernandes' repeated portrayal of China as potential threat number one and Prime Minister A.B. Vajpayee's depiction of China as being the central reason for the nuclear tests sank bilateral ties to new lows.

The Chinese premier was consequently blunt when Singh called on him, the first time an Indian foreign minister did so in eight years. Zhu Rongji declared: "Because of reasons known to all, Sino-Indian relations have suffered serious damage last year. We are gratified to see that bilateral relations are being improved and developed." Further, the Chinese press reported that Zhu told Singh that China and India should increase exchanges and mutual visits and "remove any doubts within the relations".

Says Sujit Dutta of the Institute of Defence Studies and Analyses (idsa): "Li Peng is the highest central figure who has been handling the India policy through the 1990s. He was premier when Narasimha Rao visited in 1993 as well as when Rajiv Gandhi visited in 1989."

Rajiv's visit was the first for an Indian premier after Nehru's trip in 1954. That Li represented China was not insignificant; he's the adopted son of late Chou En-Lai, premier during India's disastrous showing in the crippling 1962 war.While Rajiv did not go there to solve the border issue, he did go to create an atmosphere in which important issues could be discussed.

Nevertheless, before Rajiv met Li, he was extensively briefed for a contentious debate on the border issue. There was none of that, however. Demonstrating moderation, Li made two points: one, that a solution to the border would have to be based on mutual adjustment and, two, through negotiations.

Deng Xiaoping had conveyed almost the same message to Vajpayee when he went to Beijing in February 1979 as foreign minister. Indeed, Deng then suggested that the two sides adopt a "package solution" to the boundary question, indicating readiness to settle the issue. Deng pointed out that India had under its control areas which were rich in natural resources (Arunachal Pradesh) whereas China had areas which were unpopulated and economically unviable (Aksai Chin). A policy of give-and-take could be adopted, Deng said. Vajpayee's reply was that a beginning could be made by tackling those areas which were less of a dispute.

Says a former ifs official: "The 1979 Deng-Vajpayee discussion shows that the Chinese were more willing than the Indians to settle the border issue. It is to us that the border problem appears intractable." That perception is now changing with the recent exchange of maps regarding the middle sector.

Some of the Sino-Indian border problems may be of New Delhi's own making, chiefly through neglect. Says K.N. Ramachandran, a China-watcher formerly with idsa: "In the absence of pro-active border measures, when faced with a relatively cohesive Chinese border management policy, a host of problems with tactical and strategic implications arise." For instance, a senior government official says the defence ministry had planned seven bridges in Arunachal Pradesh reaching the Chinese border. A decade later, only a couple are operational.

However, C.V. Ranganathan, ambassador to China between 1987 and 1991, maintains: "It is a very good sign that China continues to invest (political capital) in India through visits by high Chinese leaders. Such visits will contribute to the removal of suspicions and the creation of trust and confidence in the long-term intentions of China."

Indeed, suspicions of Chinese long-term intentions have only grown, given the systematic, sustained, and strategic cooperation between Beijing and Islamabad in defence and nuclear areas. Barely 10 days before Pokhran II, the cia director testified before the US Senate thus: "Conventional arms sales have lagged in recent years, encouraging Chinese defence industries to look to wmd (Weapons of Mass Destruction) technology-related sales, primarily to Pakistan and Iran, in order to recoup. There is no question that China has contributed to wmd advances in these countries." And though China had enacted its first comprehensive law on nuclear technology exports, he said "the jury is still out on whether these changes are broad enough in scope and whether they will hold over the longer term". "Will the Chinese stop supplying spares for material already supplied? Unlikely," says Ramachandran.

Li's visit though isn't about negotiations on these issues, but preparing for the future. India's China policy is mired in the bitter memories of the 1962 debacle, and this New Delhi must learn to overcome.

Flights Of Hope And Anxiety